A week, it has been said, is a long time in politics. If so, then a year is a lifetime and two years an eternity.

Predictions about what might transpire in an election two years from now are therefore premature and foolish. If the elections in British Columbia, Alberta and Quebec, where the pollsters mostly got things wrong, showed anything, it was that people can change their minds late in the contest. And it has been known for a long time that the majority of the population doesn't follow politics closely at any time.

With those caveats in mind, consider the three national parties with the House of Commons now closed for the summer, starting with the New Democrats.

These are tough times for the NDP. Provincially, the party blew an election they might have won in B.C. and have been picking over the entrails ever since. In Nova Scotia, the NDP government is way behind and would lose to the Liberals were an election held soon.

Nationally, leader Thomas Mulcair did a superb job as prosecutor-in-chief in the Commons over the Senate expenses affair, pinning the government's ears back day after day. Abolition of the Senate is now the NDP's rallying cry. Abolition makes for great theatre, even though it won't, can't and shouldn't happen for a myriad of legal, constitutional and political reasons.

Senate reform/abolition won't decide the next election. The economy and its management will – plus the personality of the party leader. Voters will ask whether a leader understands them. How about his or her competence? Will they feel comfortable with him or her?

On the economy and its management, perhaps life is unfair, but in B.C., too many nagging doubts about the NDP's economic literacy spoiled the party's chances. And Adrian Dix didn't connect with enough people in the heart and the gut, which is where most voting decisions come from.

Mr. Mulcair has some ways to go to demonstrate the party's economic competence and his own personal empathy. A prosecutorial style in the Commons wins media plaudits, but not necessarily votes.

The federal NDP has slid back since the last election, as the Liberals under Justin Trudeau have surged forward. Talk about life being unfair.

Mr. Trudeau, whom Globe's cartoonist Brian Gable brilliantly depicted as Peter Pan, seems to soar above Canadian politics, the repository of hope, the political vessel into which a lot of people pour what they choose to believe of him. The unbearable lightness of his policies do not matter, at least not now. He seems likeable, and he does possess a magnetic quality that all stars do. Amazingly, the Conservatives' attack ads did not seem to dent his allure; indeed, the ads might have backfired.

What Mr. Trudeau needs, and his handlers know it, are not television stars but people with what the British call "bottom," which means experience and gravitas. He especially needs people whom the country might believe know how to run the economy.

Enter Toronto Centre, the riding being vacated by former interim leader Bob Rae. This is a riding made for someone with business experience whom Mr. Trudeau can put beside him in the Commons and say, "I don't know much about running anything, but she (or he) does."

When trying to build a coherent team, leaving nomination decisions up to associations, as Mr. Trudeau has said he will do, is wonderfully democratic but strategically unwise. The same goes for the Montreal riding vacated by Denis Coderre, now running for mayor of Montreal.

The Conservatives are non-factors in both urban ridings. They will be straight up Liberal-NDP fights, with Liberals as incumbents. Winning them with the right candidates would help Mr. Trudeau enormously; losing them would bring Peter Pan down to earth.

Speaking of being brought down to earth, the Conservatives have landed with a thud. Their brutal political style is wearing on Canadians outside their somewhat shrinking core vote. They still get top marks for economic management. Apart from that, they and their leader look too much like tin men, brittle on the outside without a heart inside. 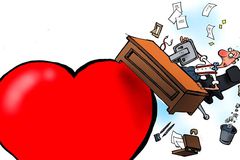