Canada will resettle nearly 2,000 asylum seekers from Israel despite Prime Minister Benjamin Netanyahu’s decision to freeze an agreement with the UN refugee agency to relocate thousands of Africans to Western countries.

Hours after he announced a plan on Monday to resettle about half of the approximately 39,000 African asylum seekers to countries including Canada, the Israeli leader put the deal on hold because of a political backlash.

But Canadian and Israeli officials told The Globe and Mail that the Prime Minister’s decision will not affect the resettlement of asylum seekers in Israel who have requested to immigrate to Canada.

Canada quietly approached Israel on its own to take in the refugees, officials say. The Canadian arrangement is separate from the agreement reached Monday between Israel and the United Nations High Commission for Refugees (UNHCR).

Israel’s ambassador to Canada, Nimrod Barkan, confirmed Monday that Canada made the overture two months ago after the Israeli government announced its intention to expel African migrants to third-party countries in Africa.

The plan will involve asylum seekers who have made requests to immigrate to Canada. Israel agreed to postpone their deportations until their applications have been processed by Canadian authorities.

The office of Immigration Minister Ahmed Hussen said the agreement with Israel will not be affected by Mr. Netanyahu’s decision to put the UNHCR agreement on hold. The government is currently working with Israel to process nearly 2,000 refugees who want to immigrate to Canada through Ottawa’s private sponsorship program, an official said.

“Resettling refugees is a proud part of Canada’s humanitarian tradition. It demonstrates to the world that we have a shared responsibility to help those who are displaced, persecuted and most in need of protection,” spokesperson Hursh Jaswal said in a statement to The Globe and Mail.

According to Immigration, Refugees and Citizenship Canada, 1,936 Eritrean refugees were resettled to Canada from Israel in 2016 and 2017, almost all of them through private sponsorship. Mr. Jaswal said Canada will meet its commitment to resettle 4,000 Eritrean refugees from Africa by the end of 2018.

Mr. Netanyahu announced on Monday that he had reached an “unprecedented” deal with the United Nations to resettle about 16,250 asylum seekers from dictatorial Eritrea and war-torn Sudan.

Hours later, he announced on Facebook that the deal with the UN refugee agency had been frozen and was now under review because the agreement still allowed for about 18,000 migrants to temporarily remain in Israel.

Mr. Netanyahu acknowledged on Facebook the political pressure he was facing from Israelis living in neighbourhoods in South Tel Aviv, where most of the migrants are concentrated.

“I decided to strive for a new agreement that would still allow the continued removal of the infiltrators,” Mr. Netanyahu said in a message posted on Facebook. “However, I am attentive to you, first and foremost to residents of South Tel Aviv. So I decided to meet with Interior Minister Aryeh Deri with representatives of the residents tomorrow morning. In the meantime, I am suspending the implementation of the agreement, until after I meet with the representatives.”

A senior source, who was involved in the discussions between Canada and Israel, said the deal to accept 1,845 refugees is solid regardless of what the Israeli Prime Minister does with the UN agreement.

Mr. Netanyahu had named Canada, Sweden, Italy and Germany among the countries willing to take in the migrants. But Germany and Italy said they had made no such agreement.

Mr. Netanyahu’s office said that legal obstacles and ensuing problems with the proposed expulsion to third-country African destinations forced his government to amend its plans and come to an agreement with the United Nations.

According to the now-frozen agreement, the United Nations High Commissioner for Refugees had pledged to find homes in Western countries for at least 16,250 of the asylum seekers while Israel would give temporary status to the remainder.

Mr. Netanyahu’s original plan, which offered each migrant US$3,500 and a plane ticket, was criticized by Israeli human rights activists and the United Nations as unethical and a blot on Israel’s image as a refuge for Jewish migrants. 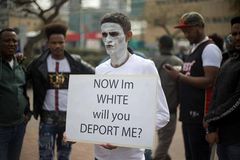