First Nations elder Sadie North says she doesn’t want anyone else to have to face what she did.

At a news conference on Friday, the 72-year-old detailed how she went to Winnipeg’s Grace Hospital in early September to seek medical treatment, only to have a doctor ask her repeatedly if she had been drinking.

The concern Ms. North raised at her Winnipeg news conference about systemic racism in health care – now the subject of a complaint to the hospital – is national in scope.

She told her story on the same day an emotional emergency meeting on the subject convened in Ottawa. In discussions that spanned hours, federal, provincial and territorial officials and others looked at the devastating effects on Indigenous patients, and how to address the problem.

During the meeting, physicians and experts apologized directly to the family of Joyce Echaquan and pledged to ensure there is justice in her name.

There have been national calls for action since the 37-year-old mother and member of the Atikamekw Nation provided a public window, via Facebook, into the way she was demeaned at a hospital in Joliette, about 70 kilometres northeast of Montreal, before her death at the end of September.

Ms. Echaquan’s husband, Carol Dubé, was among those who participated in Friday’s discussion.

Opinion: The RCMP’s atrocious response to racism in Alberta

After the meeting, Indigenous Services Minister Marc Miller said at a news conference that Mr. Dubé wants federal and provincial governments, and all Canadians, to fight racism in all its forms.

“He wants justice for Joyce."

"It was not an isolated incident,” she said.

“Joyce, in the middle of her deep pain, showed something that so many people would prefer to ignore. So, she gave Canada a gift that has to be honoured, no matter how difficult it is to receive it.”

Racism is not an accident, she added, noting that the health care system is not broken, but has fundamental flaws in its design.

“It is not a few bad apples," she said. "It is a system that not just turns a blind eye, but implicitly endorses and reinforces this behaviour many times over.”

The federal government is facing political pressure to examine specific actions it could take.

Mr. Bellegarde also said the tragedy of Ms. Echaquan’s death must motivate governments to change the course of systemic racism in health care.

Natan Obed, the president of Inuit Tapiriit Kanatami, Canada’s national Inuit organization, said in an interview he appreciated hearing different perspectives at the meeting from Indigenous medical professionals on how pervasive racism is in health care.

He said he hopes that the stories these health care workers – who are First Nations, Métis and Inuit – shared about their constant struggle with racism "will allow ministers to think of this as more of an immediate concern and crisis.”

Mr. Obed also noted the work that has been done over the decades to identify racism in the health care system, particularly against Indigenous women, and stressed that it has to be at the forefront of the discussion.

“My call to the federal government and to provinces and territories is to use this meeting as a platform for action rather than to pacify the outrage that exists across this country about the way Indigenous people are treated within the health care system," he said.

Ottawa is seeking a commitment for a second gathering in January, 2021, to which it hopes governments and health care organizations will bring proposed and implemented measures.

Senator Yvonne Boyer, who is Métis, spoke at Friday’s meeting and made recommendations, including that a task force look at the Canada Health Act with an eye to implementing provincial standards to address racism.

The senator, who co-wrote a 2017 report on Indigenous women who were being sterilized in Saskatoon without their consent after they gave birth, said that since she became a senator in 2018, her office has heard from many more survivors of forced tubal ligations across the country.

She said the survivors join their voices in Ms. Echaquan’s memory, and in support of her family after her tragic and preventable death.

"They say Canada must approach the correction of systemic racism in health care with a seriousness equal to its fatal consequences,” she said. 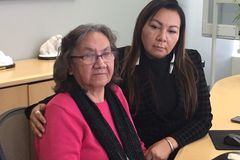