The New Democratic Party is a parliamentary underdog fall’s divisive federal election, but its leader Jagmeet Singh says he is not interested in partnering with the Conservatives to overwhelm Prime Minister Justin Trudeau’s Liberal minority.

In a year-end interview with The Canadian Press, Mr. Singh acknowledged there could be political expediency in having his New Democrats turn to the Conservatives to either defeat or dominate the Liberals.

But Mr. Singh has no plans to go down that road.

“When it comes to the values that I have and have been pushing for, I don’t see an alignment with the values the Conservatives have pushed forward,” he said.

The NDP and Liberals found themselves in a war of words during the fall election campaign to prove which party was more progressive, especially after the New Democrats lost many of the seats they gained in the 2011 “orange wave” to the Liberals in 2015

In general, a weakened Liberal party is good for both the New Democrats and the Conservatives.

Despite this and despite the fact the NDP often struggles to differentiate itself from the Liberal party in its policies, Mr. Singh said he still couldn’t imagine teaming up with the Conservatives – even under an upcoming new leader, after Andrew Scheer’s recent resignation.

“My goal isn’t to defeat the Liberals. My goal is to push them to do better,” he said.

Mr. Singh said he wants progressive laws that he believes are priorities for many Canadians, including to create national programs to cover drug costs and dental care.

However, Mr. Trudeau would be wise not to presume his offer of political help comes without strings.

“The frame that I take is – the Liberals need to work with somebody. They have 13 votes that they need in this minority government. So they need to get that support from somewhere. I put it out there that I am willing to be that person that supports them,” Singh said.

But if the Liberals’ goal is to simply “cruise along” and hold onto power, Mr. Singh said he’s out.

“My leverage and my encouragement comes from – if you need something passed that’s meaningful, I’m right here. I’m ready to do it. But I’m not going to be taken for granted. I’m not going to support them blindly if it’s not good for people.”

Mr. Singh and his New Democratic Party had a roller-coaster of a year, beginning with Mr. Singh spending much of his time in British Columbia in a bid to win a seat in the House of Commons. He won his Burnaby South seat in a February by-election, but appearances in question period and the halls of Parliament did not translate into an immediate bump for the party.

The New Democrats struggled with fundraising after finishing 2018 with nearly $4.5 million in negative net assets – the party’s worst balance sheet since 2001.

The NDP wasn’t able to match the Liberals’ and Conservatives’ advertising during the campaign, thanks to its smaller war chest, and also only chartered a campaign plane for the last 12 days of the race.

Many pundits were predicting the NDP could lose official party status, thanks to these factors and low polling numbers at the start of the campaign.

But the momentum didn’t translate into enough votes to keep the NDP from losing seats.

The party placed fourth in the House of Commons behind the Liberals, Conservatives and Bloc Quebecois after winning 24 seats, down from the 39 it held before the Oct. 21 vote.

The party’s losses were especially deep in Quebec, where it lost all but one of 16 seats the party had held onto in 2015.

Mr. Singh attributes this to his being new to the federal scene. This election was his “introduction to Canada” and to Quebec, “where I had the biggest introduction to make,” he said.

The campaign also saw heated debate among federal leaders over Quebec’s controversial law banning religious symbols like hijabs, turbans, kippahs and prominent crucifixes for some civil servants – a law that is widely popular among Quebec voters.

Mr. Singh admits the law, known as Bill 21, could have played a part in his party’s major losses in the province. Mr. Singh is a practising Sikh known for his brightly-coloured turbans.

“I think it was divisive as a bill and I think divisive bills will encourage or create more division. And that might impact me as someone, on first glance if there is something promoting division, because I look different.”

Many people face discrimination based on race, gender or country of origin, Singh said, and he hopes to be a voice for those people and show he’s willing to take a stand against it and to try to win over the “hearts and minds” of Quebecers.

Looking to 2020, Mr. Singh says he hopes to work with the Liberals to implement a universal, single-payer pharmacare program and national dental coverage and to see Indigenous communities finally given access to clean drinking water, housing and equitable child-welfare funding.

He says that even though Canada may be experiencing divisive politics and policies, he believes there is reason to hope.

“While we live in a beautiful place, it’s an incredible country, there’s so much more that unites us than divides us and there’s this real, strong belief that people want to take care of their neighbours. And I want to build on that feeling of camaraderie.” 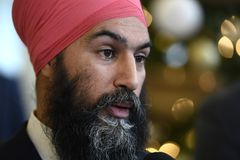 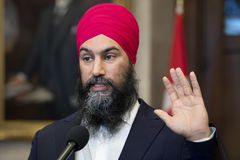 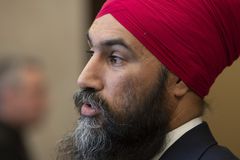