Finance Minister Bill Morneau will forecast a deficit in excess of $300-billion Wednesday, sources say, as the government announces for the first time how shutting down large swaths of the economy and spending billions on emergency pandemic programs is affecting Ottawa’s bottom line.

Two senior government officials told The Globe and Mail the minister will announce a forecast deficit that is more than $300-billion.

A third senior government official said Wednesday’s report will forecast the deficit for only the current fiscal year and it will not include any new policy announcements. The Globe is not identifying the officials because they were not authorized to comment publicly on the matter.

The details of the fiscal snapshot will be released Wednesday at about 1:40 pm ET, when Mr. Morneau will address Parliament. The unprecendented size of the deficit – which has grown more than tenfold in seven months – has raised questions about how the government plans to phase out the heavy pandemic spending.

Calling it an “economic and fiscal snapshot,” the government has already cautioned that the report will be less detailed than a traditional fiscal update. Updates normally include five years of fiscal projections. Two officials said the government plans to release a full update in the fall.

Wednesday’s snapshot is expected to break down federal spending and revenue forecasts and provide the Finance Department’s assessment of the economy.

Mr. Morneau scrapped plans to release a March budget, leaving a December estimate of a $28.1-billion deficit for the current fiscal year as the most recent official projection of Ottawa’s bottom line.

The cause of the deficit is a combination of lower tax revenue due to the government-imposed shutdown of large segments of the economy to slow the spread of the virus and new spending in response to COVID-19. The Finance Department’s most recent report on pandemic spending, dated June 25, said the federal government has announced $174-billion in related measures.

Several independent forecasters have pegged the size of this year’s federal deficit at between $250-billion and $300-billion.

Parliamentary Budget Officer Yves Giroux reported in June that the deficit could be about $256-billion this year, a figure that was compiled before the government announced a further $20-billion in spending. The government usually includes additional potential spending as a contingency in its deficit forecasts.

Bank of Nova Scotia economist Rebekah Young released a report Tuesday stating the deficit is likely to exceed 14 per cent of gross domestic product, which is about $300-billion, while RBC has said it would be around $265-billion and BMO said it will exceed $250-billion.

Goldy Hyder, president and chief executive officer of the Business Council of Canada, said he hopes the Finance Minister uses the snapshot to signal a shift in direction.

“I really think it’s an important pivot point from what was to what will be,” he said in an interview Tuesday. Mr. Hyder said some support programs will still be needed, but he expressed hope that the government will outline plans to phase out the emergency programs or at least make them apply more narrowly.

Mr. Hyder and other business-group leaders are also urging Ottawa and the provinces to focus on improving plans for the fall so that schools open and parents are relieved from having to juggle work while teaching and caring for their children during the day.

The Ontario government has asked school boards to plan for a range of scenarios for September, including a mix of in-person classes and online learning. The Ottawa-Carleton District School Board has proposed a scenario in which children would attend school in person two days a week and attend online courses from home two days a week. Schools would be closed every Wednesday for a deep cleaning.

Education is a provincial responsibility, but the federal government has offered to transfer an additional $14.1-billion to the provinces for a range of extra costs related to the pandemic, including child care. On Friday, Prime Minister Justin Trudeau was asked whether Ottawa wants some of that money to support the reopening of schools.

“Yes, one of the conditions around that $14-billion that we’re offering to provinces for a safe restart of the Canadian economy is directly focused on child care, directly focused on making sure that young people – including kids over the age of 6 – have access to spaces and supports in a safe way,” he said, although his answer did not directly mention schools.

Dan Kelly, the president of the Canadian Federation of Independent Business, said many small-business owners are at risk of bankruptcy and are frustrated by the continuing lack of detail around support programs such as the federal wage subsidy.

Mr. Kelly said he would like Wednesday’s update to address the many practical issues that have surfaced with the various federal emergency programs.

“I’m hoping that maybe there’s a series of measures that have been saved up for [Wednesday],” he said in an interview. “If not, you can expect that the worry will turn to panic on the part of business community.”

The official Opposition Conservatives outlined their requests at a news conference earlier this week.

Conservative finance critic Pierre Poilievre told reporters the update should adjust the Canada Emergency Response Benefit, the $2,000-a-month payment for individuals who have lost nearly all of their income because of COVID-19, so that individuals have an incentive to accept available work.

NDP MP and finance critic Peter Julian held a news conference in Ottawa on Tuesday calling on the government to raise revenue through a new wealth tax and a stronger focus on combatting offshore tax avoidance.

Two senior fellows at the C.D. Howe Institute, Peter van Dijk and Glen Hodgson, published a paper Tuesday calling for higher consumption taxes, such as the HST, instead of hiking personal or corporate tax rates.

“While we strongly prefer to manage fiscal deficits and public debt through a combination of economic growth and carefully controlling government spending, we anticipate governments will be forced to increase their revenues by raising taxes,” they wrote. “We recognize this has been a populist flashpoint, but appropriately designed, consumption taxes can be quite progressive. Therefore, increasing consumption taxes should be the main area for consideration when raising additional tax revenues.”

PBO says it could cost $98-billion to provide basic income for most Canadians for six months
July 7, 2020 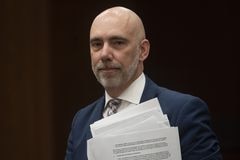