Rank-and-file New Democrats have begun voting on hundreds of motions that include a call for a 100-per-cent tax on billionaires and the removal of all statues honouring Canada’s first prime minister, Sir John A. Macdonald.

The party will hold a convention this weekend to come up with planks for a platform Leader Jagmeet Singh can take into a possible election campaign this year.

As the week began, party members were voting to determine which of at least 450 motions will make a short list of 70 that delegates will consider during the virtual convention from Friday to Sunday. The short list will be released later in the week.

Young New Democrats of Quebec, citing Macdonald as the architect of a policy against Indigenous Peoples, call for “an end to the heroic commemoration” and a move to “present Canadians with a nuanced and holistic view of Canada’s first Prime Minister.”

Measures to achieve this would include working with municipalities to remove statues of Macdonald from public spaces and display them in museums instead.

The “abolish billionaires” motion comes from Quebec’s Young New Democrats and party members in 13 electoral district associations across the country. They cite what they call the most extreme wealth inequality in Canadian history, and a doubling in the number of Canadian billionaires and the money they hold in the past decade. The means for reversing the situation would be a 100-per-cent tax on all gross wealth above $1-billion. The proposal is short on details of how it would work.

New Democrats from Windsor-Tecumseh propose seeking all-party consensus to work with First Nations, Inuit and Métis artists to identify meaningful symbols to include on a new Canadian flag that would symbolize a pathway to reconciliation.

New Democrats in the Toronto riding of Spadina-Fort York suggest the NDP commit to phasing out the Canadian Armed Forces because “militaries and war have devastatingly negative impacts on civilian populations,” and that, once the phaseout is done, personnel receive full salaries and benefits pending their assignments to “new jobs in the civil service.”

Resolutions can have notable political impact. Conservative Leader Erin O’Toole has faced questions since delegates at a recent Conservative Party convention voted against adding a declaration that climate change is real to the policy book.

The vote result came after Mr. O’Toole had declared a serious climate change plan a key policy priority as the party gets ready, under his leadership, for the next election.

In a statement, Mr. Singh described the convention as an occasion for the NDP riding associations and their members to advance resolutions and engage in the democratic process.

“Our conventions are guided by a democratic process that allows members to openly and freely discuss and vote on a variety of issues,” he said.

Speakers at the convention will include British Columbia NDP Premier John Horgan. Also on the roster are provincial NDP leaders Kate White of Yukon, Wab Kinew of Manitoba and Andrea Horwath of Ontario.

The federal Liberals will hold a virtual convention from Thursday to Saturday.

The NDP is the fourth-place party in Parliament with 24 seats. That places them behind the Liberals, Conservatives and Bloc Québécois.

Tensions over Israeli-Palestinian conflict persist within NDP ahead of convention
Subscriber content
March 31, 2021 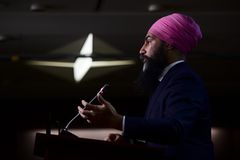 Singh disagrees with MP’s post on racism in Quebec, but demands no apology
March 23, 2021