The revival of the Bloc Québécois has rekindled pressure on Prime Minister Justin Trudeau to appoint a minister with additional responsibilities in Quebec.

Mr. Trudeau, who represents the Montreal riding of Papineau, rejected calls in 2015 for a so-called Quebec lieutenant, saying the province already had a “general” at the helm of the federal government.

The Liberal Party’s failure to increase its seat count in Quebec in last month’s election brought back the idea of a minister with greater visibility or an increased organizational role in the province. While much of the postelection analysis has focused on the party’s failure to win seats in Alberta and Saskatchewan, there are also concerns among Liberals that the party is increasingly losing touch with Quebeckers outside Montreal.

The Liberals fell to 35 seats from 40 in Quebec in the election, while the Bloc grew to 32 from 10. The Liberals increased their seat count in Montreal, but lost seats in other parts of the province and failed to take ridings from the NDP in mid-sized cities such as Trois-Rivières, Drummondville and Saint-Hyacinthe. Those went to the Bloc, which ran on a promise to defend in Ottawa the positions taken by the Quebec government.

Rémi Massé, who lost his re-election bid in a riding in eastern Quebec, said the Liberals can no longer rely solely on Mr. Trudeau to carry the party’s message outside Montreal. From 2016 to 2019, Mr. Massé was the chair of the Liberal Party’s caucus of MPs from Quebec.

“It is obvious that there is a need for a person who is well known in Quebec, who can take some of the heat as well as go on the offensive. It can’t always be the PM who is on the front lines,” he said.

Mr. Massé said that in Quebec’s French-language media universe, in which provincial politics garner more attention than federal politics, MPs struggle to explain what they have achieved in Ottawa.

“What generates headlines are opposition attacks against the government. That gives Quebeckers the impression that they are better represented [by opposition MPs] and that we are not a strong presence," he said.

Linda Lapointe, who failed in her re-election bid in a riding north of Montreal, said the priority for the Liberals at this point is finding a way “by which Quebeckers see themselves in the party and see it as the best political vehicle for them.”

Liberal MP Alexandra Mendès, who was re-elected in a riding south of Montreal, said she is not convinced the party needs a Quebec lieutenant. Instead, she said, the priority for the Prime Minister should be bringing in new senior staff from Quebec and the West.

“There is a need for a greater diversity of opinions and points of views among his closest advisers,” she said.

Asked about the possibility of appointing a Quebec lieutenant at a news conference on Oct. 23, Mr. Trudeau left the door open.

“We will spend a lot of time in coming days to reflect on how we can do better, how to serve Canadians from all regions. We have a few weeks ahead of us and we will take the time to ensure that we can represent those who voted for us and those who didn’t vote for us,” he said.

The new cabinet will be sworn in Nov. 20.

The Liberals are holding a gathering in Ottawa on Thursday that is open to re-elected, defeated and incoming MPs.

Mr. Trudeau will be meeting with opposition leaders next week, after which the government will determine the date for the first sitting of the new Parliament. 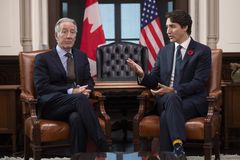