Admit it: Even though you weren’t in the market, you’ve walked past a condominium sales office and have given into temptation: You walked in and faked your way into a tour and a brochure to see whether, in three years, the actual product matched the “mood” the developer had put on display.

And, more often than not, the sales office – and our city has seen plenty rise and fall in the past 15 years – was far sexier than the rather pedestrian finished product, wasn’t it?

Or maybe I’m the only one who does that. Regardless, take it seriously when I suggest you to go pretend at the sales office for “Cabin” at the corner of Dovercourt Road and Sudbury Street. On a former U-Haul lot, Curated Properties, with the help of RAW Design, has grouped together seven shipping containers to form an innovative, intimate and appropriately sustainable office, given what’s to come to the site in 2017.

“I had seen, in London, somebody had done almost a mall out of [shipping containers], where the ground floor was retail, there were outdoor staircases, and there was a restaurant with a patio above,” Curated’s Adam Ochshorn says. “And I thought: ‘Wow, that would be interesting to do a sales centre out of.’”

It’s possible that Mr. Ochshorn, or his partner Gary Eisen, had purchased a crepe or kabob up at Scadding Court Community Centre’s Market 707 at Dundas and Bathurst Streets, where a similar arrangement of containers houses all sorts of retailers.

Architect Roland Rom Colthoff certainly knows the place, as his firm, RAW, has been helping with expansion plans recently after extensive work by LGA Architectural Partners laid the groundwork a few years ago.

“When people started coming in the sales centre,” Mr. Ochshorn says, “they thought that we were doing a mid-rise building out of shipping containers, which we’re not.”

“But the ethos of the building,” Mr. Colthoff adds, “it kind of looks like containers.” 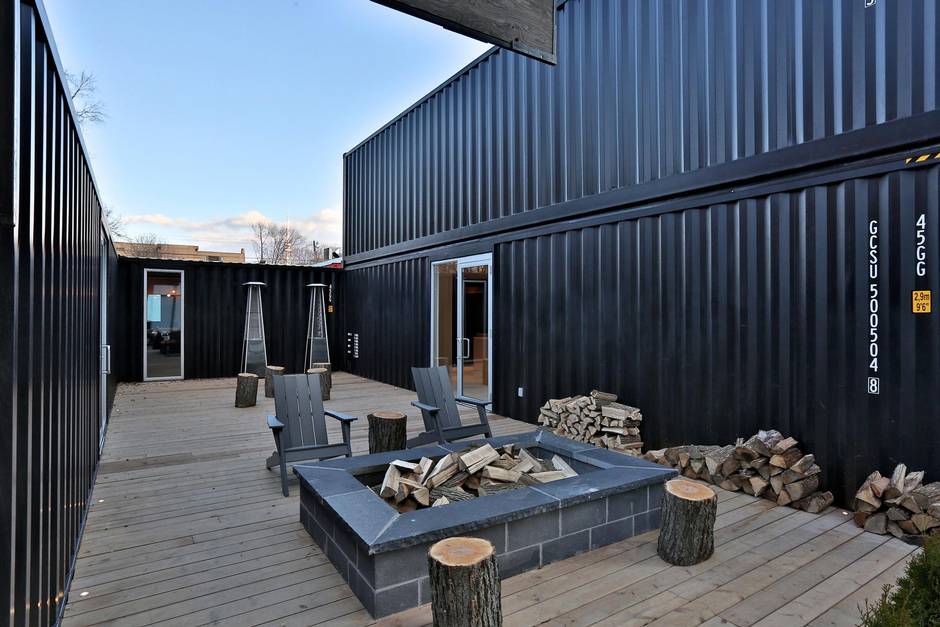 “When people started coming in the sales centre,” Mr. Ochshorn says, “they thought that we were doing a mid-rise building out of shipping containers, which we’re not.” (RAW Design)

It’s instructive to describe what happens when curious and talented minds are let loose on a bunch of standard 40-by-8-by-10-foot containers.

In a very Frank Lloyd Wright-esque compression-and-expansion manoeuvre, visitors enter via a single container, which acts as corridor. At the end is a little room with a rustic-modern bench and a throw-rug. Turning right, one tours the standard master- and guest-bath and ogles the custom vanities, then exits to confront and consider the condo’s finish packages, stacked and arranged in bento boxes of colours and textures by Mason Studio. Another right turn and the wrapped-in-wood kitchen presents itself; a smoky marble back-splash and cabinet pulls made from rawhide strips create a clean, understated composition. 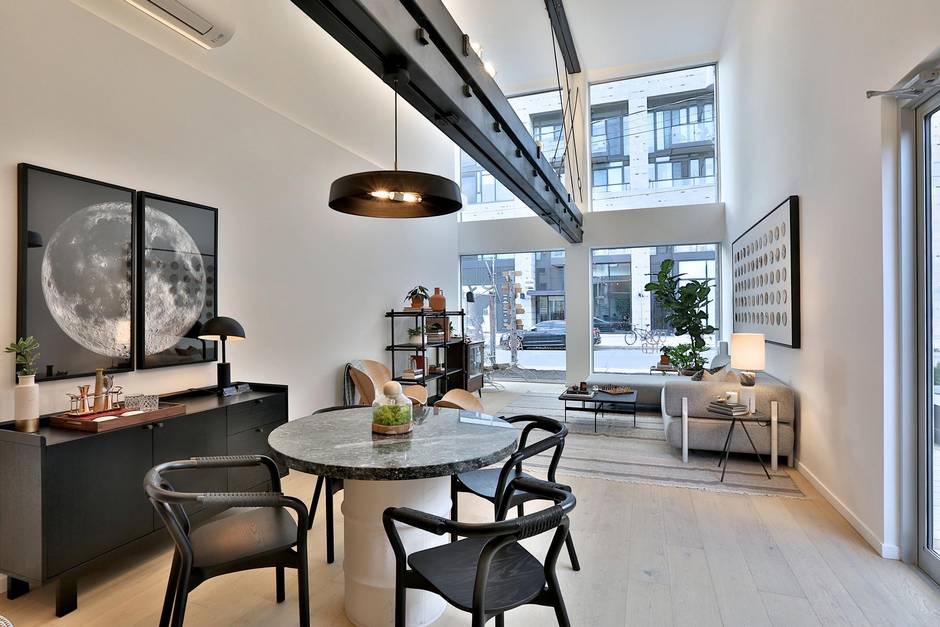 Four containers have been married to create a grand, airy and light-filled room. (RAW Design)

The exhilarating walk into the dining and living area, however, cannot be overstated. Here, four containers have been married to create a grand, airy and light-filled room. The only clue that corrugated ceilings, walls and floors have been removed to create this room is the long, slender “beam” overhead, where all once linked together. While furniture and art are limited to white, grey, black or natural wood tones, there are touches of whimsy, such as the reclaimed oil-barrel dining-table base, a moon-phase calendar done in tree bark, and a vintage television. It’s a very homey, relaxing space.

“We’re trying to create an environment that feels as though you’re getting out of the city … what does that quality of cabin give you?” Mason Studio’s Stanley Sun observes. “And it’s not necessarily aesthetic, but it’s more so an experience of your house.” 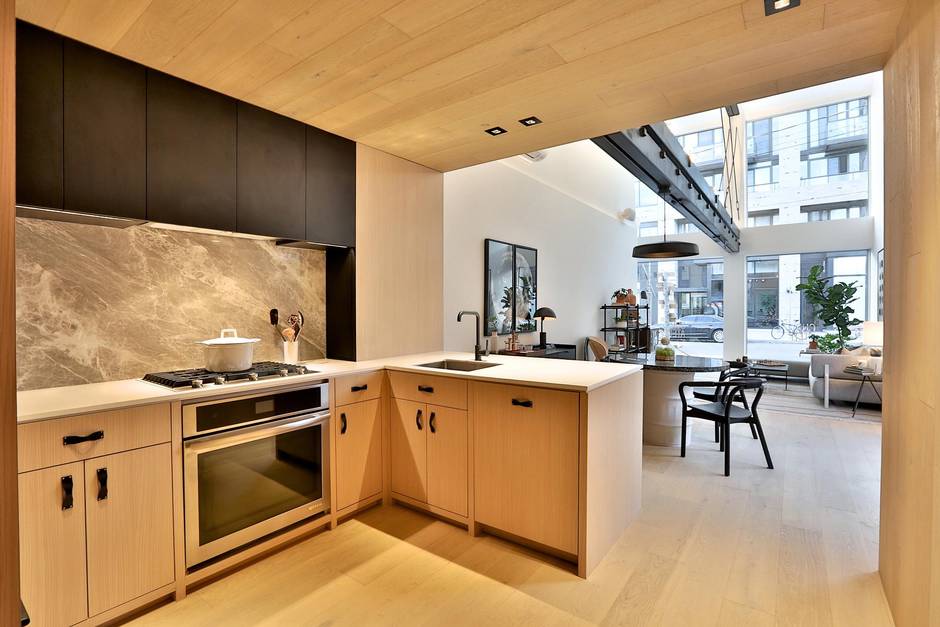 The only clue that corrugated ceilings, walls and floors have been removed to create this room is the long, slender “beam” overhead, where all once linked together. (RAW Design)

Those of us who’ve experienced and enjoyed visiting these transformed shipping containers will have a chance to own them once they’ve completed their sales office duties, Mr. Ochshorn says: “It’s going to be an auction, it’s not going to be a contest – there is, surprisingly, a lot of big money tied up in these things.”

The idea to sell the containers to someone who has a piece of vacation property-in-waiting came from the frustration of watching other Curated sales offices be dismantled and then, quite literally, get tossed in the garbage.

This aspect of sustainability dovetails nicely with the RAW-designed, six-storey condo that will begin construction in late spring. When completed, the 25-unit condominium will be one of the first buildings in the city to take advantage of the January, 2015, regulatory changes that allow timber-framed structures to rise higher than four storeys. 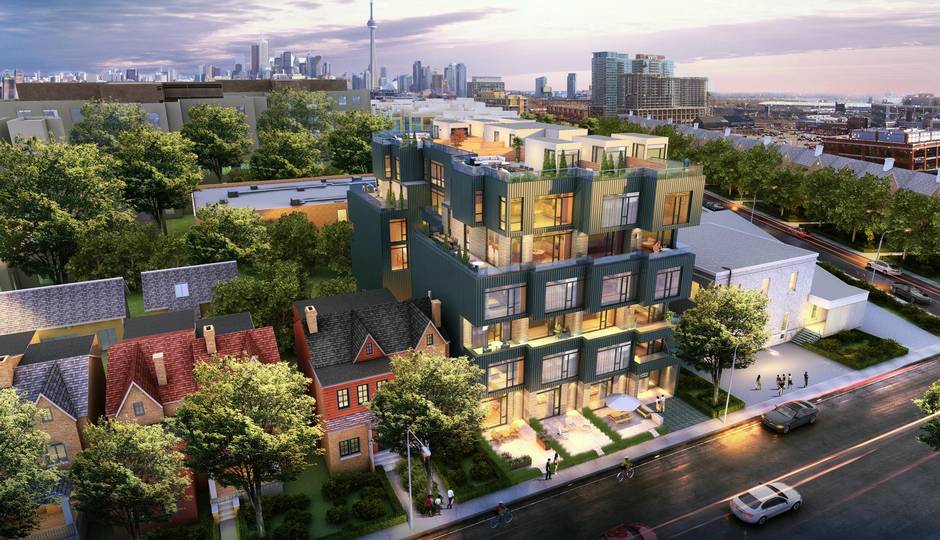 As well as cost-savings, wood buildings can go up faster and are easier to manage on tight sites with no materials “laydown space.” That means homeowners get into their new homes faster.

They’ll also get something more interesting, Mr. Ochshorn says, since being a timber-pioneer means there’s a responsibility to offer something different beyond the structure: “I said to Roland: ‘Let’s come up with a building that people aren’t doing in the city – if I see another grey brick building …’” he trails off with a laugh. He adds that he’s seen too many condo designs where, “if it didn’t have balconies, it’s an office building.”

No chance of that here; unless, of course, you’re a park ranger and your workplace is the woods.

To create this tranquil urban cabin in a shipping container, Stanley Sun of interior-design firm Mason Studio used a lot of homegrown talent. He stresses, however, that he wanted to avoid clichés such as moose antlers and striped blankets.

The sexy brass-and-black metal light fixtures found throughout the sales office are by Montreal firm Lambert et Fils. Absent from the design scene these past few decades because of being forever linked with the overindulgent eighties, brass has been making a slow but steady comeback.

The large moon-phase art over the sofa is by Christina Ott of Crow. Bark from trees at the artist’s own cottage was used.

The wooden lounge chair, which resembles Hans Wegner’s 1963 Shell Chair, is by “up and coming” Ottawa designer Laura Langford.

And the lovely leatherwork and woodwork throughout is by Jacob Mailman.

“There’s so much talent in Canada and sometimes we don’t tap into that,” Mr. Sun says.