As they begin to harvest what may be one of the largest canola crops on record, many farmers are growing increasingly concerned over the prospect of a drastically smaller export market as China stands firm on its plan to stall Canadian exports of the seed.

China – Canada's largest canola-seed customer, importing an average of four million tonnes per year – is preparing to implement a new standard on Sept. 1 that will require the amount of extraneous plant material, known as dockage, in canola seed exports to make up less than 1 per cent of each shipment.

A majority of the sales to China have already stopped ahead of the deadline, said Canola Council of Canada president Patti Miller, leaving many in the industry bracing for a significant hole in the market and potentially lower prices as harvest begins. The new standard would require an increased level of cleaning that Ms. Miller says would be time-consuming and more costly.

About 40 per cent of Canadian canola seed exported abroad goes to China, worth a total of about $2-billion.

Over all, Statistics Canada estimates Canadian farmers will produce 17 million tonnes of canola this year, while other industry experts peg that figure at more than 18 million tonnes, which would place this year's crop among the largest in Canadian history.

Chinese officials say the new standard is designed to prevent the spread of a fungal disease known as blackleg. They also say the disagreement over canola is a scientific matter that should not be on the agenda when Prime Minister Justin Trudeau visits the country this week ahead of the G20 summit.

Brian Chorney, who farms about 800 acres of canola on his 2,500-acre farm in East Selkirk, near Winnipeg, says the issue is nothing new and farmers have been working to address it for years, growing blackleg-resistant varieties and following strict crop rotations, among other things.

He's concerned that the standard will slow down the shipment of other grains on his farm.

"Our fear is that if you go ahead and we are held to that standard, the export terminals may get tied up because, from my understanding, it takes more time to clean to that standard … and that means that the wheat we want to ship might be slowed down," said Mr. Chorney.

Despite the impending change to stricter dockage standards, sales to China have not come to a complete halt. Ms. Miller said smaller shipments that meet the 1-per-cent standard have been exported to China, but describes it as "more like a specialty shipment" that is not feasible for all of Canada's canola exports.

"From time to time, would some companies be in a position to meet that standard? Yes. But would the entire industry be able to meet that on a consistent basis, for four million tonnes? It's not practical and I think more importantly there's no scientific justification to do that," Ms. Miller said.

Related: A Chinese dynasty with a 21st-century outlook

Ms. Miller and other industry officials insist that research shows that reducing dockage in shipments will not decrease the risk of blackleg.

"The risk of blackleg transmission is already extraordinarily low and there's no difference in risk between the current levels of dockage that we have and what China is suggesting," Ms. Miller said.

Tony Tryhuk, branch manager at RBC Dominion Securities in Winnipeg, said if the main Canadian export companies – including Cargill Ltd., Louis Dreyfus Corp., Viterra Inc., Richardson International Ltd., and Parrish and Heimbecker Ltd. – are unwilling to clean to the new standard, China would be virtually eliminated as an export destination until the issue is resolved. That slowing demand would result in depressed pricing.

"If other countries are price-sensitive buyers, then you can expect them to take up some of that slack, but it's unlikely they will ever be able to replace the demand from China," Mr. Tryhuk said, adding that if China goes ahead with the new standard, Canada's domestic processing industry could experience a boost as the market operates closer to maximum capacity.

"I don't think it's all doom and gloom," said Mr. Tryhyk. "Yes, it's a concern, but I don't think it's the death of the canola industry. It just means that demand will shift to other places. It's a trade dispute that needs to be resolved."

Mr. Chorney said he's hoping Canada and China will reach an agreement "sooner rather than later."

"Any uncertainty is going to have a detrimental effect on pricing," said Mr. Chorney. "We probably would have to hold back on selling canola until something positive happens, hopefully a resolution." China does not want canola dispute on agenda during Trudeau’s visit
December 15, 2017 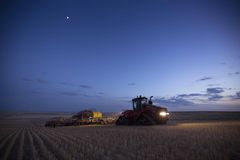