Simon Fraser University's Beedie School of Business has tapped a veteran dean, international researcher and award-winning teacher as its next leader, effective Jan 1.

Ali Dastmalchian says the opportunity to lead a school with Western Canada's largest business undergraduate program, a fast-growing menu of graduate programs and a focus on entrepreneurship and sustainability proved irresistible.

"In my view, Beedie has always been a nimble, innovative and very connected-to-the-business-community school," he says. "What they are trying to do is very interesting."

Currently a professor of organizational studies and international business at the University of Victoria's Gustavson School of Business, Dr. Dastmalchian served as its dean for 10 years until 2012. During his tenure, he secured donors to name the school and graduate programs, introduced new graduate-level programs and oversaw successful efforts to gain international accreditation for Gustavson. Previously, he was dean of the faculty of management at the University of Lethbridge for five years until 2001.

At Gustavson, growth was an underlying theme for Dr. Dastmalchian. But he says Beedie is at a different stage of development as an internationally accredited school that has seen the introduction of five graduate programs, including an international executive MBA, aboriginal leadership and technology commercialization, over the past five years.

"They have grown tremendously and developed new programs under previous deans," he says. "It is time now to position these programs in a way that allows Beedie and Simon Fraser to shine."

With the Burnaby, B.C., university's stated strategy to engage with the broader community, says Dr. Dastmalchian, "that gives me a lot of room to work with the faculty and the university to create a better identity for the school and better branding in terms of a business program that is different and fully engaged with stakeholders."

He hopes to build on Beedie's track record of working with industry, including Vancouver's vibrant startup sector, by raising the profile of existing programs such as the recently introduced certificate in science and technology commercialization. But he also hopes to build on the school's international activities.

Currently, he is the president and chair of the board of Global Leadership and Organizational Behaviour Effectiveness Research and Education Foundation, a research project on culture and leadership in 62 countries.

When a job recruiter called this year about the deanship at Beedie, Dr. Dastmalchian had recently returned from a leave to continue his research and teaching activities on the Gustavson faculty.

Then he remembered what he liked about being a dean.

"The idea of engaging the community, students and innovative faculty and taking it to a higher level is something I like doing," he says. "I believe in business education." 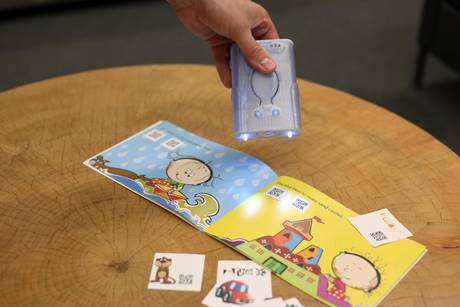 The Rotman MBA team’s Hult Prize entry is a cellphone-like device that kids hover over a bar code to listen to a local voice reciting the story. (University of Toronto)

The question, on paper, is simply stated: How would you provide quality education by 2020 for 10 million children under the age of 6 living in the world’s urban slums?

Six business school teams from around the world, including one from Canada, think they have an answer to the question posed by organizers of the Hult Prize, a global competition for young social entrepreneurs that drew 22,000 applicants this year.

Next week in New York, at a session of the Clinton Global Initiative, a Hult partner, the winning team will walk off with $1-million (U.S.) and a chance to market a potentially game-changing, socially conscious business idea.

Win or lose, the four-person team of MBA graduates from the University of Toronto’s Rotman School of Management plans to pursue its idea for “talking stickers” – quick response bar codes that activate a low-cost reader enabling children to listen to a recorded voice or to record their own voice to say or sing the words.

For example, with talking stickers, the child (or parent) could use a hand-held device to scan a bar code near, for example, a bright yellow star on the page of a nursery rhyme book to hear Twinkle, Twinkle, Little Star. By scanning over a differently programmed sticker with a bar code, the child or parent then could record their voices to practice their language skills. The stickers are not just in books; they can be placed on household items, which then become tools for the language development of young children.

Earlier this year, having scrapped their initial idea for the Hult Prize, the members of Team Attollo (Latin for elevator) turned their attention to the literacy challenges faced by young children in impoverished countries. According to Hult Prize organizers, 112 million children up to 6 live in slums without access to schooling while 70 million children, more than half of whom are girls, are prevented from attending school.

“We found that language development and vocabulary is the key issue in early childhood development,” says Jamie Austin, who like teammate Lak Chinta, holds a PhD in neuroscience and earned a Rotman MBA this year. The other team members are engineers Peter Cinat and Aisha Bukhari, who earned their Rotman MBAs in 2014 and 2015, respectively.

Over the summer, with advice from early childhood professor Monica McGlynn-Stewart, the team conducted trials in Kenya and India, working with local school officials and families who cannot afford even modest school fees for their children. The early results were promising, with children and their parents adding to their vocabulary.

Meanwhile, with help from Toronto-based Autodesk Research and U of T engineers David Johns and Matt Ratto, the Attollo team developed a low-cost prototype for the hand-held device, with a view to making it affordable ($1.50 a month) to families who earn between $2 and $5 a day. As well, the team is working with local publishers and schools to develop school curriculum content for the stickers.

Over the summer, Hult Prize organizers brought finalists to a boot camp in Boston to make their business idea “investment ready.”

“It was a little bit collaborative and competitive,” says Mr. Austin, of the relationship with the other five teams. “We would talk out the ideas and we saw each other’s presentations every week,” he says, with coaching from academics and industry leaders. “We got tons of feedback from the Hult Prize business experts.”

Mr. Austin and his colleagues are so committed to their venture that, for now, they have quit their day jobs to found Attollo as a social enterprise company.