Over the past year, Gregg Saretsky has kept analysts and aviation buffs guessing over the details of WestJet Airlines Ltd. next major move.

But over lunch in Toronto, the WestJet chief executive officer tells me that the carrier is getting set to take one of the biggest steps in the company's history. His plan calls for the Calgary-based airline to move beyond its fleet of Boeing 737s, the planes that have served as the airline's workhorse since it launched operations in 1996, reliably transporting travellers across Canada, the United States, Mexico and the Caribbean.

Seating anywhere between 119 and 166 passengers depending on the model, the 737s are too big to profitably service smaller destinations in Canada and lack the range needed for transpacific and transatlantic routes.

"We've built out almost as much as we can the 737 footprint in Canada, serving all the markets within the mission range and capability of the 737," he says, after settling into a booth at Alice Fazooli's, an Italian restaurant in downtown Toronto. "We see the end of our ability to grow with the single-fleet type. We're pretty much done with the 737s in Canada."

Mr. Saretsky favours first acquiring smaller jets to expand WestJet's domestic network, which in turn will pave the way in the long term for larger aircraft for overseas flights.

But for now, his priority is to transform the way Canadians fly to and from smaller centres, with potential non-stop service to "Middle Canada" – markets that are underserved or neglected. Air Canada and its affiliates already fly to some of the centres targeted by WestJet, but in many cases, travellers have to change planes to get to their final destination or board an 18-seat turboprop in their hometown.

"We need to fly into small communities, and if we bring airfares down, we can get a lot of travellers. You have to build out the home market first. I think of it as 737s, then some smaller planes and then ultimately something bigger," he says.

The strategy is important to WestJet because, despite its name, it doesn't even fly non-stop between the provincial capitals of Regina and Winnipeg. Travelling between those two cities requires a stopover in Calgary. With smaller planes, WestJet would be positioned to profitably do Regina-Winnipeg non-stop, and also spread its wings to new Canadian destinations such as Fort St. John, B.C., and Sarnia, Ont.

Although he has a slight case of jet lag after an overnight flight from Calgary, Mr. Saretsky is animated as he speaks about WestJet's future and the sector in general. His past may have something to do with his enthusiasm. He fell in love with the industry while working as an Air Canada flight attendant for three summers in the early 1980s, and then joined CP Air, the predecessor to Canadian Airlines International, in 1985.

It's safe to say, then, that Mr. Saretsky's passion for planes – and the economics behind them – is the real deal. And it might explain why, if you shared his overnighter from Calgary to Toronto, you would have found him picking garbage out of the seat-back pockets of his flight after landing. "We all pitch in to clean the plane, and that saves us $12-million a year," he says. "When everybody sees everybody else pitching in, it's a pretty cool thing. I can't begin to tell you how powerful that is."

He talks about corporate culture during his light lunch of mixed salad, with balsamic dressing and pieces of Parmesan chicken. He explains that valuing employees is much more than a marketing ploy. Not only does it connect to consumers, he says, it encourages cost-saving ideas – even if it means having a cabinet full of pens unabashedly collected by employees from hotel rooms. WestJet is profitable enough to afford its own pens, but that thrifty attitude has persisted throughout its history.

Mr. Saretsky shuns the idea that executives should receive preferential treatment, and says that even during harsh Prairie winters, he has to jockey for a parking spot just like anyone else at WestJet's head office at Calgary International Airport. "A lot of companies would have reserved parking for their executives. We have no such privileges and no country club membership and no car allowance," he says.

While Mr. Saretsky emphasizes that no corporate decision has been finalized yet on whether to order larger or smaller planes, he believes it makes sense for the company to first focus on neglected domestic markets before considering larger jets for routes to Asia and Europe.

"Domestically, if it's a short-haul mission, then we would be leaning toward turboprops. If it's medium to longer haul, then it's regional jets, but jets have poorer economics on shorter stage lengths," he says, pouring sparkling water into his glass.

The Canadian-built Bombardier Q400 turboprop, already being used by Toronto-based Porter Airlines Inc. and Air Canada's regional service, is on WestJet's shortlist. At 70 seats, the Q400 is more comfortable than older turboprops, configured to seat 18 or 30 passengers, used by Air Canada affiliates such as Central Mountain Air. Also on the shortlist is the French-Italian ATR 72 turboprop.

He is also examining whether to fly non-stop between some of WestJet's existing destinations to avoid Toronto's Pearson International Airport. Travelling non-stop between Montreal and London, Ont., for instance, might be economical for a smaller plane.

If WestJet decides in 2012 to order new aircraft, it would take at least another 12 to 18 months for delivery.

"Think of it as building blocks. We want to make sure we've done a good job of locking up our home market first," Mr. Saretsky says. "We have an opportunity here to start up WestJet, just like we did nearly 16 years ago, getting into new markets with lower fares."

Born in 1959 in Châteauguay, Que., and raised for nearly 11 years in the Montreal suburb.

Bachelor of science in microbiology and biochemistry, University of British Columbia, 1982; master of business administration, UBC, 1984.

Worked as flight attendant for Air Canada for three summers to help pay his way through UBC.

Management at Seattle-based Alaska Airlines Inc. from 1998 to 2008.

Married for 26 years to wife, Debb. Their children are 25-year-old twins Mark and Jennifer, and 17-year-old Bobby.

Mr. Saretsky has two older brothers who are commercial pilots, one with Cathay Pacific Airways Ltd. and the other with Air Canada.

Raised nearly $70,000 for Movember, including a $25,000 donation from WestJet chairman Clive Beddoe. The charity campaign is staged in November, when men grow mustaches to raise money for prostate cancer research. Mr. Saretsky shaved off his mustache on Dec. 1.

How to get a flight upgrade to first class - hopefully for free
December 21, 2011 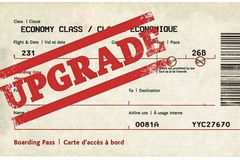 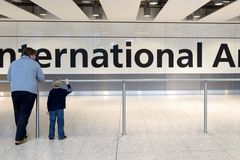