China's yuan is gaining admittance to an exclusive club of global reserve currencies in a nod to its growing economic and financial clout.

The International Monetary Fund will add the yuan to its basket of currencies that set the value for its special drawing rights, joining the U.S. dollar, euro, British pound and Japanese yen.

Monday's decision by the IMF's executive board will not instantly grant the yuan similar reserve status to the big four currencies. But it does set the stage for wider use of the Chinese currency in international trade and commerce and serves as a seal of approval of Beijing's recent spate of market-oriented reforms.

Joining the basket was a top priority for Beijing, which is eager to exercise more influence in global financial affairs, counter U.S. dominance and attract more international capital.

To that end, Beijing has moved to make its once tightly controlled currency more accessible and tradable at a time when capital has been pouring out of the country and its reserves have been shrinking.

IMF managing director Christine Lagarde called the decision "recognition of the progress that the Chinese authorities have made in the past years in reforming China's monetary and financial systems."

Among other measures, Beijing has removed certain restrictions on access to the domestic bond market for foreign central banks and other reserve-holding institutions. It is also issuing debt more frequently to boost liquidity and is increasing currency-trading hours.

"The continuation and deepening of these efforts will bring about a more robust international monetary and financial system, which in turn will support the growth and stability of China and the global economy," she said in a statement.

The IMF was expected to add China to the basket once its inside experts agreed that it now meets the standards for inclusion. The Obama administration said in September that it would support the move, "provided the currency meets the IMF's existing criteria."

But China has a long way to go before anyone should think this is a welcome home for foreign capital.

"The factors that are important to central banks and private investors in determining whether to hold [yuan] assets have to do with liquidity and depth," Sue Trinh, a senior currency strategist with Royal Bank of Canada's investment arm, said in a report.

And China doesn't meet the desired levels on either count.

The Chinese market, the world's third largest after the United States and Japan, has never been dicier as the economy continues to slow and policy makers steer more companies and local governments toward increased debt issuance and away from bank loans.

The inclusion of the yuan in the IMF basket is "a huge symbolic victory for China, but comes with strings attached to it," said Kamel Mellahi, a professor of strategy at the Warwick Business School in Coventry, England, who focuses on China and other emerging markets.

"China has been loosening its tight grip on the management of the yuan for a while, but now [China's central bank] is going to come under immense pressure to be more transparent and improve its way of communicating with international markets."

The IMF's special drawing rights (SDRs) were developed in 1969 as an international reserve asset to supplement its 188 member countries' official reserves. SDRs are exchangeable for actual currencies, with their value based on the basket of underlying currencies.

When the yuan is tossed into the basket next October, it will be assigned a weighting of 10.92 per cent, higher than the yen and the pound. Much of the new weighting will come at the expense of the euro, whose share will decline to 30.93 per cent from 37.4. The U.S. dollar will remain at nearly 42 per cent.

Why the addition of China’s yuan to IMF currency basket matters
November 30, 2015 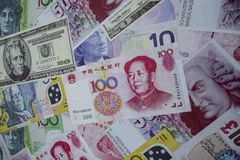