Globe and Mail reporter Stephanie Nolen's recent analysis of the crisis facing state-owned Petroleos de Venezuela SA brought back memories of my mid-1998 visit to Venezuela's oilfields at the invitation of PDVSA's then-president Luis Giusti. I was impressed by the company's technological expertise and a level of employee pride seldom found in state-owned enterprises.

Under Mr. Giusti, production had grown to 3.2 million barrels a day by the time former Venezuelan president Hugo Chavez took office in February, 1999. Long a critic of PDVSA's operating independence, Mr. Chavez began what he termed "a process of integrating PDVSA into the economic and political model of Venezuela," beginning with the appointment of his Bolivarian Socialist colleagues to the company's board. Mr. Giusti, an internationally respected petroleum engineer and industry leader, resigned soon after. So did his successor (a company veteran), who was replaced by the first of several Chavez cronies, Hector Ciavaldini. The transition to ideologically driven leadership led to the departure of many of the PDVSA's engineers and other professionals, people in strong demand internationally, including in Canada.

In reality, it would take tens of billions of dollars simply to maintain current production levels, and hundreds of billions to achieve that growth target. This, for a company facing a $480-billion (U.S.) debt and seeing almost all of its cash flow sucked away to pay for bloated social programs. PDVSA's only hope is to attract international investment, a slim prospect considering the unilateral cancellation of foreign agreements by the late Mr. Chavez.

Venezuela's conventional oil and gas resources are among the world's largest. The enormous Orinoco region contains oil sands deposits similar to those recovered by drilling and steam injection in Canada. But Venezuela's are easier and cheaper to produce because steam injection isn't required: The tropical climate warms subsurface temperatures, allowing the heavy oil to flow naturally.

I was so impressed by the country's resource endowment and the technical expertise of PDVSA personnel that I came away believing Venezuelan oil production growth was unstoppable. But not only has it stopped, it has reversed. The fact that Canadian oil production, which faces much greater technical challenges than in Venezuela, has grown steadily over the same period offers some fundamental lessons.

The first is that building a business requires reinvestment. Siphoning off cash to shareholders or governments stymies growth. The second lesson is that skilled people are always in demand, either in another company or another country. Without them, the only direction is down.

The third lesson is that, sooner or later, state-owned enterprises will be doomed by cronyism and dysfunction. The idea that it is up to government to set the rules, and business to hit the ball, separates free-market capitalism from command-and-control socialism. Which leads to a key lesson for those who cling to socialist philosophies: Distributing wealth, before creating it, impoverishes everyone. Only free-enterprise countries have managed to build strong and prosperous societies.

Venezuela's petroleum resources are not its only natural endowment. Vast forests cover much of the country, yet many people live in rickety shacks. Huge rivers offer unparalleled hydro-power potential, yet Caracas regularly experiences power brown-outs. Venezuela's staggering beauty suggests enormous tourism potential, yet the country is considered one of the most violent in the world. Its climate makes raising crops extraordinarily easy, yet many people rely on government handouts. And the country's skyrocketing public debt and collapsing international credit rating now puts those handouts in jeopardy.

Other countries have resuscitated dysfunctional state-owned enterprises through privatization, but that requires an underlying foundation upon which to build investor confidence. Sadly, Venezuela's ruling elite seems determined to continue their same destructive policies as the country descends toward both economic and social collapse.

When it comes to masking Venezuela’s troubles, Maduro is no Chavez
February 18, 2014 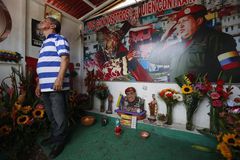 With oil economy running on fumes, Venezuela 'on the edge of the apocalypse'
February 12, 2014 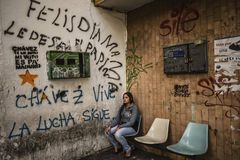