TMX Group Ltd., Canada's largest stock exchange operator, is cutting 10 per cent of its staff in its latest bid to reduce costs.

The job cuts are not the first since Lou Eccleston became chief executive officer of TMX in late 2014, but they are the most drastic. TMX intends to eliminate 115 positions over the next few months as it faces heightened competition across the exchanges industry.

The cuts will bring TMX's total head count down to roughly 1,058. The owner of the Toronto Stock Exchange and the TSX Venture Exchange is aiming to shave costs by approximately $9-million this year, and a further $4-million in 2017. The firm will take a charge of up to $17-million in connection with the layoffs.

"We had too many layers of management," said Mr. Eccleston during a presentation to institutional investors in Montreal on Wednesday, the day after announcing the restructuring.

TMX came to that realization when it compared itself to its peers, he said. Since becoming CEO, Mr. Eccleston has repeatedly made it clear that he wants the firm to become a more streamlined and nimble organization.

Ten years ago, the owner of the Toronto Stock Exchange and TSX Venture Exchange had the market virtually to itself in Canada. But competition has heated up significantly in recent years, with the launch of multiple alternative trading venues, the rise of dark pools, and the high-profile entry of Nasdaq Inc. into the market last year.

TMX is still the dominant player, but it has now has about seven other firms nipping at its heels, including Aequitas Innovations Inc., the owner of a fully fledged stock exchange. Aequitas, which is owned by the capital markets arm of Royal Bank and a cadre of pension funds and asset management firms, has only captured small market share in trading equities, but it is starting to make inroads in listings.

The bigger long-term threat to the TMX's dominance may be Nasdaq. In December, 2015, when the U.S. behemoth announced it was moving into Canada by buying Chi-X Canada, shares in TMX lost almost a quarter of their value in the span of two weeks. However, since then TMX has bounced back strongly, with the shares rising 56 per cent since the start of the year.

"We've had competition for a long time. It's not about any one [company]," said Mr. Eccleston when asked about the competitive threat Nasdaq poses.

"I don't sit there thinking, what is Nasdaq going to do?"

Mr. Eccleston said that TMX is instead concentrating on growing its own business. He also hinted that TMX could pull the trigger on an acquisition, and singled out the financial data provider space as an area of interest.

In the United States, Intercontinental Exchange (ICE) has been successful, he said, in building its own proprietary data business that competes with industry heavyweights such as Thomson Reuters and Bloomberg.

TMX currently has a partnership with U.S. firm Standard & Poor's (S&P) in this area. This past Sunday, TMX found itself in a bizarre situation with S&P Capital IQ, the market intelligence division of S&P, when it had to put out an urgent statement to reassure investors that it is still a member of the S&P/TSX Composite Index.

S&P had sent an erroneous alert to its clients, informing them that TMX wasn't in the index any more. S&P later admitted the alert went out by accident, but provided no explanation. 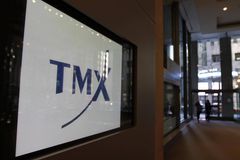 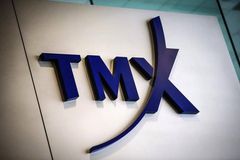