It’s amazing how fast you can go from first to worst, hero to zero, bruiser to loser.

Remember how well Canada emerged from the financial crisis and Great Recession? Indeed, it led the Group of Seven industrialized nations two years ago, before the collapse in oil prices.

Now, according to the latest forecasts from Bank of Nova Scotia, it is set to trail the G7 in economic growth this year.

“We came out of the last recession faster and stronger, but that has waned,” said Scotiabank deputy chief economist Aron Gampel.

Scotiabank projects Canada’s economy will expand by just 1.1 per cent this year, in line with some other forecasts that differ only slightly.

That will be at the bottom end of the G7 countries, the bank said, calling for economic growth of 2.2 per cent in the United States, 2 per cent in Britain, 1.8 per cent in Germany and 1.3 per cent in France.

But we’re in good company, with Italy and Japan expected to also see expansion of just 1.1 per cent.

Of course, economists have been marking down their forecasts for growth in Canada at such a fast pace amid the oil shock that anything could happen at this point.

“Even with a turnaround as the year progresses – based upon expectations of stronger U.S. demand, renewed stabilization in commodity markets and increased fiscal stimulus – Canada’s output growth will be hard pressed to average just 1.1 per cent in 2016 – the weakest economic performance among the G7,” Mr. Gampel said.

Some other economists believe Canada will trail even that. National Bank Financial projects growth of 0.9 per cent, and Capital Economics an even bleaker 0.7 per cent. 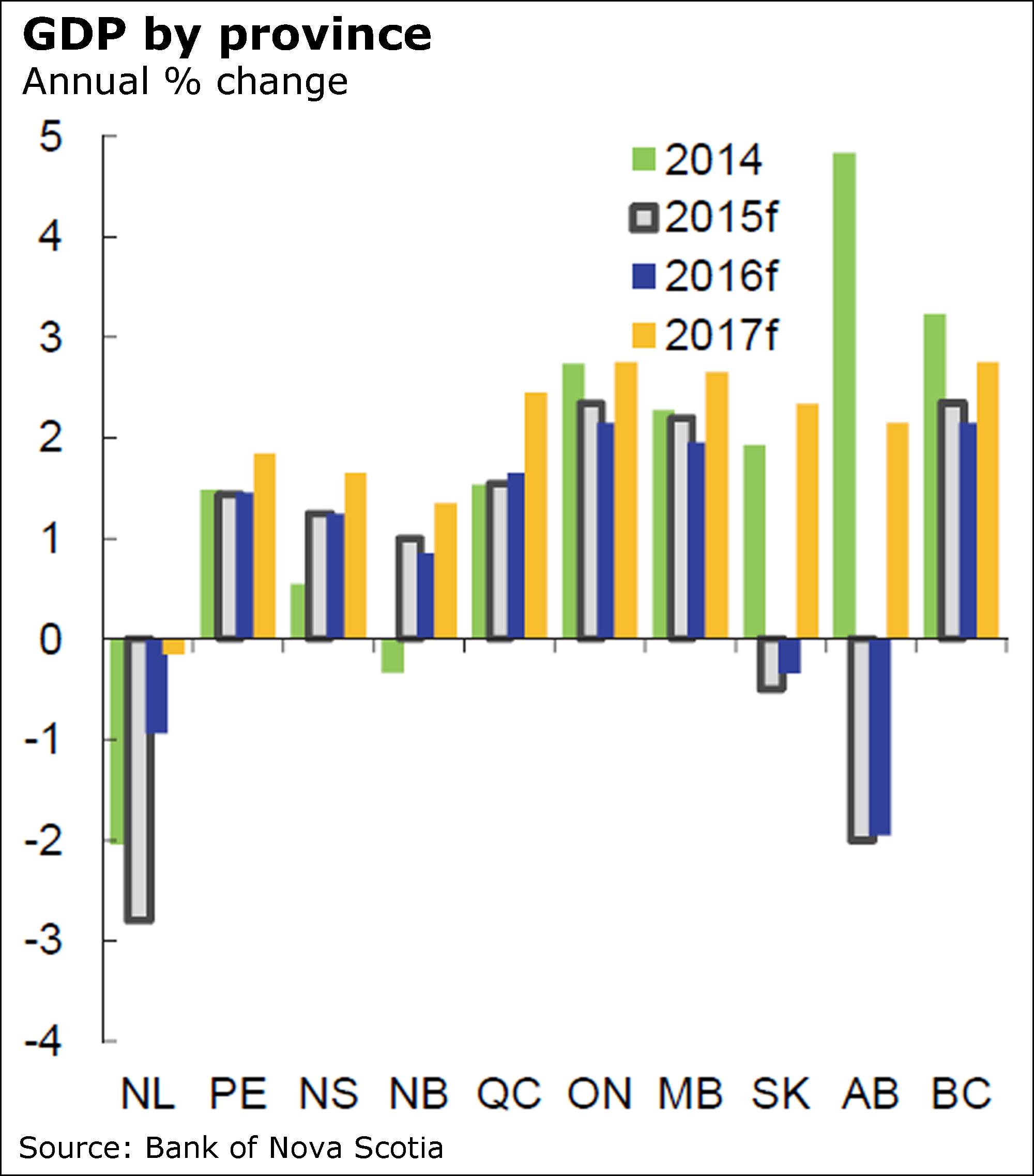 Of course, Canada’s performance is one of a regional divide amid the hit to the oil provinces.

Scotiabank research economist Neil Tisdall noted that Canada’s economy has outperformed the G7 average in 12 of the past 16 years.

As for leading all G7 countries, Canada was tops in 2013, and among the best performers in the years preceding, Mr. Tisdall’s numbers showed.

The Conference Board of Canada also weighed in today with a bleak economic outlook, warning that oil prices aren’t poised for a fast recovery, though its projections for growth are better than those of other forecasters, at 1.7 per cent.

“Although much of the recent weakness has been contained to the energy sector, it is beginning to spread to other areas of the economy,” it said.

“The consumer - the main driver of the economy over the last several years - is overstretched, and consumer spending is beginning to show signs of weakening,” it added.

“Meanwhile, the acceleration in exports that was expected for 2016 has so far shown no sign of materializing despite a substantial pickup in the U.S. economy and a large depreciation in the Canadian dollar.”

Oil may be faring somewhat better, but oil companies aren’t.

As fourth-quarter and annual results continue to pour in, the collapse in crude prices is taking an ever-mounting toll on energy companies around the world.

Today, Royal Dutch Shell posted its worst full-year results in more than a decade, warning, too, of further cuts.

“In the last year, the company has taken writedowns in excess of $7-billion on its operations in Alaska, Ukraine, as well as the Carmon Creek tar sands venture in Canada as it looks to dispose of non-core assets and looks to take on Exxon Mobil in the liquefied natural gas space,” said CMC’s Mr. Hewson.

“Along with the other oil majors, the main focus of concern is the dividend policy, as well as the risks of cutting expenditures too deep, and in the process curtailing its ability to react quickly to a turnaround in the oil price, as the supply and demand dynamics shift away from the current glut.”

In fact, ConocoPhillips bowed today and cut its quarterly dividend to 25 cents (U.S.) from 74 cents as it posted a huge slump, sinking to a 2015 loss of $4.4-billion from a profit of $6.9-billion a year earlier.

Amid the Great Cauliflower Panic comes this: The value of Canadian vegetables at the farm gate topped $1-billion last year for the first time.

Cauliflower, of course, has come to represent the surge in vegetable prices related to what the low loonie means for import costs.

This isn’t that. It may, in fact, be the reverse.

The farm-gate value of vegetables rose 8.8 per cent in 2015, according to fresh (no pun intended) Statistics Canada numbers.

“The weaker Canadian dollar may have contributed to making Canadian vegetables more attractive to the United States market,” the federal agency said.

The value of all vegetables and fruits climbed 3.9 per cent to $1.9-billion, with fruits marking a 1.2-per-cent dip.

Ontario represented more than 43 per cent of vegetables, and Quebec about 40 per cent.

“Higher yields were generally reported for root vegetables, which were better adapted to the cooler growing conditions experienced in the spring of 2015 in eastern Canada,” according to the agency.

Blueberries, Canada’s biggest in the fruit category, slipped 1.2 per cent, while grapes rose 4.6 per cent.