After losing the U.S. Open final on Saturday, Leylah Fernandez was having trouble holding it together.

The 19-year-old Montrealer’s afternoon had not gone as planned. She’d shown up ready to go, but her serve must’ve missed the bus from the hotel. The two sets felt like an endless effort in damage control.

But Fernandez still found herself on the verge of one of her house-special comeback platters. Break point and a chance to square it on serve late in the second. A little fist pumping here, and a little down-the-line magic there and who knows what might’ve happened?

But then her opponent, Emma Raducanu, slid awkwardly on the hardcourt and tore up her knee. Blood began to flow. That prompted a medical timeout.

In tears of frustration, Fernandez softly raged at an official while Raducanu spent five long minutes getting a bandage put on. Like the bleeding, Fernandez’s momentum was being staunched. And that was that. It ended 6-4, 6-3.

Afterward, Fernandez sat alone in her chair, weeping. Ten minutes after that, they finally got around to the trophy ceremony and Fernandez’s lip was still quivering.

In her on-court concession interview – the cruellest ceremony in all of sports – Fernandez began speed talking through one endless answer, hoping to avoid breaking down. She managed it well, even joking at the end about winning the “right” trophy the next time. As runners-up performances go, you’d have called it a portrait in dignity.

But as they took the microphone away from her, Fernandez asked for it back.

“I know that this day [Sept. 11] is especially hard for New York, and everyone around the United States,” Fernandez said, as the always-yippy Flushing Meadows crowd suddenly stilled. “I just want to say that I hope can be as strong and as resilient as New York has been the past 20 years.”

Is it possible that the most striking moment in Canadian tennis could have nothing really to do with tennis? Because I’ve forgotten a lot of things I’ve seen on the courts, and I will never forget how the U.S. Open crowd exploded in surround-sound after Fernandez said that to them.

If Fernandez played Joe DiMaggio at next year’s Open, the crowd would still be on her side. You can teach a pro to be good, but you can’t teach them how to do what Fernandez did there – be great.

Does that magical moment make up for the afternoon’s loss? No, you really felt Fernandez’s pain there for a couple of minutes. Then you saw her flashing that weird, little half-smirk, half-grin she has whenever she’s up to something cheeky on the court – just as she did after that little love letter to New York – and you knew it was all going to be fine. Better than fine.

Two things happened in the last week at Flushing Meadows.

Félix Auger-Aliassime made his first semi in a major. Former major champion Bianca Andreescu began rounding back into form after two shaky years. Denis Shapovalov had a bad tournament and he still made the third round. Ten years ago, we’d have all been hyperventilating over three rounds.

Canada is no longer a surprise package. It’s the novelty-sized birthday cake that gets rolled into every major tournament for the next five or 10 years. You don’t know who’s coming out of it at the end, but you know someone in red and white is.

Bizarrely, Canada becoming a global tennis superpower is only the second-best story to come out of the U.S. Open.

Because starting right after she knocked off Naomi Osaka, the constitutional democracy that lies north of the 49th parallel and between two oceans became the Official Leylah Fernandez Fan Club.

Sure, most people have only known her name for a week or so. Take away this remarkable run, and she hasn’t done a whole lot yet. But name a Canadian athlete you like better.

Don’t even bother pretending to think about it. You can’t do it. Fernandez is already your favourite pro.

This isn’t about the folly of youth and the charm of someone who’s just glad to be there (though it’s also that).

It’s that Fernandez and her family embody the highest ideals of our country. They are the success story everyone wants to believe is possible.

Also, in her style of play, Fernandez calls to mind the imaginary Canadian athlete of yesteryear, the one we aren’t sure any more really existed.

If you had to pick the tennis player Fernandez reminds you most of, it’s George Chuvalo.

(Yes, I know heavyweight boxer George Chuvalo did not also play professional tennis. But I’m going to assume that at some point in his long life, Chuvalo swung a tennis racquet in one of those enormous meat hooks of his.)

Chuvalo fought the greatest in history when they were at their greatest – Ali, Frazier, Foreman, et al. He didn’t win all the time, but Chuvalo’s back never once touched the mat in a professional fight.

That’s who Fernandez is – the Chuvalo of tennis. No one takes a punch like she does.

Five-foot-nothing and looking like she weighs less than a mini-fridge, Fernandez just kept slugging in matches any other player would have realized she’d already lost.

In New York, she walked into the best shots the second, third and fifth-seeded women’s players in the world could throw at her, and was in the end the one who ended up walking out.

So she didn’t have it in the final match. So what? This story doesn’t end here. This isn’t even the end of the first chapter of this story.

Forget about Canada for a second. This final was an inflection point in tennis globally.

Two ready-made teenage rivals announcing themselves in a co-Cinderella story, in a match of incredible quality, with just a hint of controversy (that medical timeout) and capped with oratory that made the hardest-hearted cynic catch his breath.

With Serena Williams on the way out, and Osaka looking less and less inclined to assume the crown, Fernandez vs. Raducanu is a turnkey solution to a structural problem.

“I see a generational shift happening,” Fernandez’s father/coach, Jorge, said before the final. Yes, and so does every purveyor of luxury goods on planet earth. You could see just the beginnings of what will be an endless marketing push built around this pair in the lavish and endless prefinal montages.

Raducanu vs. Fernandez – is that the Federer vs. Nadal of the 2020s?

Whatever Canada and Britain are feeling about these two young players, the tennis establishment is feeling it as well.

So no wonder a few tears were shed, in joy and disappointment. When something unexpectedly great happens, the sort of thing that changes the way you see things just a little, it’s right that emotions should run high. 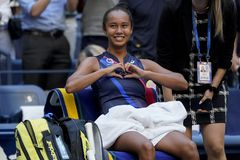 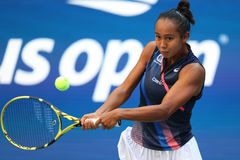 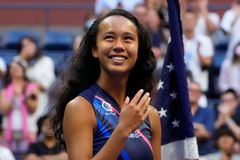