When Canadian entrepreneur Ben Cowan-Dewar first stepped foot on an abandoned coal mine in remote Inverness, N.S., in 2004, he envisaged a world-class golf course. Many thought he was crazy, he readily acknowledges today, but he brought his dream to reality.

Cabot Links, overlooking the Gulf of St. Lawrence, not only became one of Canada’s top-ranked courses after it opened in 2011, but it also formed the cornerstone of a still-growing luxury resort that has turned Cape Breton into the country’s hottest golf destination and a global attraction.

Mr. Cowan-Dewar says he had the “exact same” gut reaction when he visited another oceanside property, this one on the Caribbean island of St. Lucia. “It’s just a site that seemed like it had all of the things you’d hope for to build spectacular golf that would stand the test of time,” he says. “It spoke to me immediately.”

The lush 375-acre St. Lucia property is the next frontier for the Cabot empire. It’s the future home of Cabot Saint Lucia, a new golf resort that was announced on Friday morning.

Mr. Cowan-Dewar is on the island to meet with Saint Lucian Prime Minister Allen Chastanet, among other dignitaries, and to make the announcement.

Mr. Cowan-Dewar said he and his deep-pocketed Cabot collaborator Mike Keiser are expanding to St. Lucia to give Cabot devotees a year-round playing and staying option. “The only thing we didn’t have in Nova Scotia was golf in the winter," Mr. Cowan-Dewar said in an interview ahead of the announcement.

He added it made sense to include the new property under the Cabot umbrella, rather than launch a separate entity, to take advantage of the Cape Breton resort’s brand recognition, which has reached around the world. Golf Digest ranks Cabot Links and its sister course, Cabot Cliffs (opened in 2016), among the world’s top 100.

The Cabot Saint Lucia site is located on Point Hardy, a peninsula at the northern tip of the Caribbean island. Parts of Cabot Point will fit snugly along the jutting coastline and its clifftops, with nine green sites on the turquoise Caribbean Sea.

The golf course will be designed by World Golf Hall of Fame member Ben Crenshaw and his design partner Bill Coore, whose U.S. firm has drafted some of the world’s top modern courses. Set to open in 2021, Cabot Point will be their first Caribbean track.

Cabot Cliffs is among their creations, as are a handful of courses for Mr. Keiser’s other projects, including the latest layout at Bandon Dunes, the isolated Oregon resort where he built his reputation as a golf impresario.

“St. Lucia is such a physically beautiful island, relative to some of the flatter islands [in the Caribbean],” said Mr. Cowan-Dewar, who first explored the site about four years ago. "It’s renowned for its two pitons, the two mountains that erupt out of the ocean.

“It’s got this really tropical allure, really dramatic coastline. When we walked Bill and Ben’s routing, it just seemed like it was one of those places where the coast did everything you hoped it would do for golf.”

George Punoose, a 20-year veteran in developing and managing luxury properties, including golf resorts, is another principal of Cabot Saint Lucia. He lives in Austin, Tex. Cabot’s corporate operations will continue to be based in Nova Scotia.

Golf legend Jack Nicklaus once designed a course for the same property but it never materialized because of the 2008 global financial collapse. At the time, Mr. Nicklaus called the course “Pebble Beach warm,” an allusion to California’s Pebble Beach Golf Links, his favourite course and, coincidentally, the host venue for the U.S. Open this week.

The St. Lucia announcement comes amid a flurry of expansion activity at Cabot Links itself this year. Among other things, the resort is adding a 10-hole par-three course, a clubhouse at Cabot Cliffs and more residential real estate.

Asked if Cabot Saint Lucia, which breaks ground this summer, might blossom into a multicourse facility such as Cabot (and Mr. Keiser’s other projects) one day, Mr. Cowan-Dewar welcomed the thought but said it’s still too early to say. “You can’t have two until you have one,” he said. “We need to get this one done first, and hopefully do a great job.” 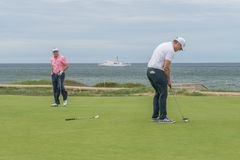