You might still be reliving Kawhi Leonard’s buzzer-beating, pandemonium-inducing, series-winning shot from Sunday’s Game 7, but he certainly isn’t.

Less than 48 hours after hitting the most electrifying jumper in Toronto Raptors history, which helped his team eliminate the Philadelphia 76ers and punch a ticket to the Eastern Conference final, the Raps superstar wasn’t indulging much conversation about its significance in Canadian sports lore.

The Game 7 hero, who celebrated in the arms of his teammates after his triumphant shot, had morphed back into his more publicly recognizable stoic persona as he faced media on Tuesday. Asked to react to the widespread fan response to his shot (and to some on social media playfully dubbing it a Canadian heritage moment) Leonard absorbed the question without as much as a smile.

“That’s the first time I heard that,” Leonard said. “Pretty much everybody congratulated me and the team on the win. I don’t know yet the ripple effect it will have … I don’t know … I’m pretty sure everybody was excited just for us moving to the next round. But I’m not sure.”

Leonard and the Raptors do not have the luxury of time to admire their grind-it-out series victory over the Sixers. They had just two days rest – one of them a travel day to Milwaukee – before tip-off on Wednesday in their next series against the NBA’s best-performing team this season, the Bucks.

“You’ve got to stay even-keeled in this league, don’t get too low or too high till it’s all done,” Leonard said. “That’s what I try to pride myself on, just staying level-headed going into the next game.”

Having been to the NBA final twice with the San Antonio Spurs – winning in 2014 and being chosen as the final’s MVP – Leonard seems keenly aware of how lengthy and arduous the road ahead still is. That is, if the Raptors hope to do something special.

Raptors coach Nick Nurse said Leonard is exemplary at not overreacting to the good or the bad, and his unique even-keeled temperament has rubbed off on the team. Nurse acknowledged that the buzz around Leonard’s exciting shot has been tough to avoid. The coach has received lots of phone calls and texts, and he hears the conversations in the lobby of his condominium as he waits for his Uber ride to work.

“Not to be a party pooper, but I try to insulate myself away from it,” Nurse said. “All I’m really happy about is that we’re still playing and we’re getting ready to go again, because I kind of expected us to be playing at this time of the year.”

The Raptors and Bucks last met in the postseason in 2017, with the Raps winning that first-round series in six games. However, there are more reasons to “Fear the Deer” this time. This Bucks team has talents such as Eric Bledsoe, Brook Lopez, Nikola Mirotic and George Hill helping out MVP-calibre superstar Giannis Antetokounmpo.

The Bucks beat the Raptors three out of four times in the regular season with their Greek star averaging 27 points, 15.3 rebounds and five assists in three of those games. That included a monster performance on Jan. 5, when he had 43 points and 18 boards – although the Raptors won.

Leonard played in those same three games, and averaged 22 points, 7.7 rebounds and four assists – his best being a 30-point performance in that January victory.

Both superstars have been extraordinary in the postseason – Antetokounmpo averaging 27.4 points, 11.4 rebounds and 4.4 assists; Leonard has 31.8 points, 8.5 boards and 3.6 assists.

The Bucks surround their standout with shooters to give him the room he needs to attack the paint, where he led the NBA in scoring this season. Leonard, Pascal Siakam, Serge Ibaka and OG Anunoby all took turns defending him in the regular season. Anunoby, Nurse said, has just now started doing some on-court work following his appendectomy last month, and is about a week away from “ramping it up” to the point where he’s close to a return.

Toronto has played 12 games in the postseason to Milwaukee’s nine, and the Bucks haven’t played since last Wednesday, after easily dispatching the Boston Celtics in five games.

“There’s certainly a theory or history that the team that’s been on edge stays on edge, and we’ve certainly been on edge and had to play at a very high level,” Nurse said. “Hopefully we get right back into that same vehicle.” 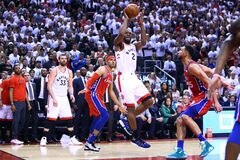 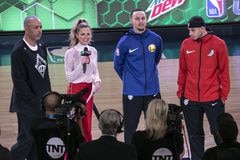 How the Toronto Raptors can beat the Bucks in their Eastern Conference showdown
May 14, 2019 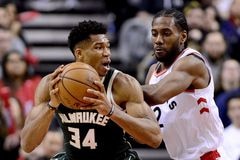