Adam Silver caught his fellow sports commissioners by surprise with his call for the U.S. government to legalize and regulate sports betting. There is little support for the NBA boss from the NHL and from at least one prominent baseball executive.

NHL commissioner Gary Bettman said Friday the issue of legalized sports betting needs a lot more discussion before any decisions about government legalization and regulation can be made. While there was no official word from NFL commissioner Roger Goodell, whose league attracts the most money by far in sports gambling, or Major League Baseball commissioner Bud Selig, they have previously objected to the idea. Toronto Blue Jays president Paul Beeston, long an anti-gambling advocate, remains opposed to sports betting.

"Why would you put yourself in a position where you could have any type of question about the integrity of your game, whether [betting] is regulated or not regulated?" Beeston said.

A discussion on all forms of media was sparked when Silver wrote an op-ed essay for The New York Times. The NBA commissioner wrote that sports betting has become so pervasive in North American society it is time for the sports leagues and the U.S. government to regulate the estimated $400-billion (U.S.) bet illegally every year in the United States.

Silver finished his essay with the following two paragraphs:

"Let me be clear: Any new approach must ensure the integrity of the game. One of my most important responsibilities as commissioner of the NBA is to protect the integrity of professional basketball and preserve public confidence in the league and our sport. I oppose any course of action that would compromise these objectives.

"But I believe that sports betting should be brought out of the underground and into the sunlight where it can be appropriately monitored and regulated."

Aside from horse racing, sports betting in the U.S. is illegal in all but four states – Nevada, Delaware, Montana and Oregon. The law governing sports betting is called the Professional and Amateur Sports Protection Act (PASPA), which was passed in 1992 and prohibits states from allowing gambling on sports.

The state of New Jersey is trying to authorize sports betting at its racetracks and casinos but the law allowing that was struck down last month by a U.S. federal court. An appeal is under way but the NBA, along with the NHL, NFL, MLB and the NCAA are officially opposed to the New Jersey law.

Silver said in his essay he and the NBA remain opposed to New Jersey's attempts to allow sports betting but he thinks it is time the U.S. government changes PASPA, legalizes betting and takes over the regulation of it, not the individual states. He said it is time to take a "thriving underground business" give fans "a safe and legal way to wager on professional sporting events."

Gambling is not one of the hottest issues with the NHL because there is less money bet on it than any of the other three major North American professional sports leagues. According to the American Gaming Association, an industry lobbying group, $3.45-billion was legally bet in Nevada's sports books in 2012. It is said only about 1 per cent of that was bet on NHL games.

There is relatively more betting on the NHL in Canada through lotteries operated by the provinces but the league still runs second to the NFL. A spokesman for the Ontario Lottery and Gaming Corp. said about $285-million (Canadian) was spent in the province on its Pro-Line games. But only $72.7-million was spent on NHL wagers, which was second behind the NFL.

Bettman, like Beeston, wonders what legal sports betting would do to the way sports fans, especially young fans, cheer for their favourite teams.

"Does it change the dynamic of the relationship that a child has growing up rooting for his or her favourite team to enter the concern of are you going to win your bet?" Bettman said. "Secondly, the issue is what does it do environmentally in a stadium and an arena where people's rooting interests would tend to diverge from the obvious.

"It's not something that's going to happen overnight if it happens at all. It's something that will get much further discussion."

Beeston once served as chairman of the Centre For Addiction And Mental Health in Toronto and is concerned about the effect legal betting would have on those with gambling problems. He said he realizes sports teams and leagues are now accepting advertising from casinos and betting web sites but thinks a line still has to be drawn.

"I'm personally against it because I've seen what can and does happen," he said. "As soon as you legalize it, the sooner you get people starting gambling at a very young age, the more it becomes a life-long affliction." 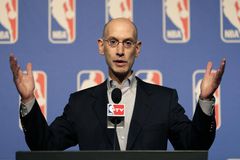