The heavyweight title fight – Muhammad Ali and George Chuvalo in Toronto 50 years ago – was never supposed to happen. The challenger, Mr. Chuvalo, and the location, Toronto, were last-ditch choices after the United States was roiled by a 1960s storm of war, patriotism, religion and race. Chicago was supposed to host the March 29, 1966, bout: Mr. Ali against local fighter Ernie Terrell. But a month earlier, Mr. Ali had become eligible for the draft. He spoke out against the Vietnam War and resisted joining the fight. It sparked outcries of treason.

Mr. Ali – a hero today – was already an intensely controversial figure, having joined the Nation of Islam and changed his name from Cassius Clay in 1964 when he first won the heavyweight title.

Chicago was aflame. The newspapers demanded that the fight be cancelled. The state governor called Mr. Ali’s words “disgusting and unpatriotic.” The boxer refused to back down. “I’m not apologizing,” he declared at a hearing – and the fight was cancelled immediately afterward. Efforts to stage the bout elsewhere in the United States failed. Montreal was considered, but politicians there also said no. Finally, three weeks before the boxing match, Toronto – and hometown heavyweight George Chuvalo – were settled on.

Controversy still stalked the fight. Conn Smythe, founder of the Toronto Maple Leafs, quit the board of Maple Leaf Gardens in protest against the planned venue.

In the ring, Mr. Chuvalo was widely expected to succumb quickly to Mr. Ali. Instead, Mr. Ali for the first time was pushed to a full 15 rounds – even as he easily won the decision. “This was my toughest fight,” Mr. Ali, dressed in what was described as a flamboyant brocade tuxedo, said afterward in the steaming Gardens press room.

Boris Spremo, a Globe and Mail photographer who soon after began a long career at the Toronto Star, was 30 at the time. Mr. Spremo had come to Canada a decade earlier from Belgrade, escaping Tito’s Yugoslavia. He had forged a friendship with Mr. Chuvalo, whose parents were Croatian, and closely chronicled the fighters in the short three weeks before the bout and was ringside for the main event. 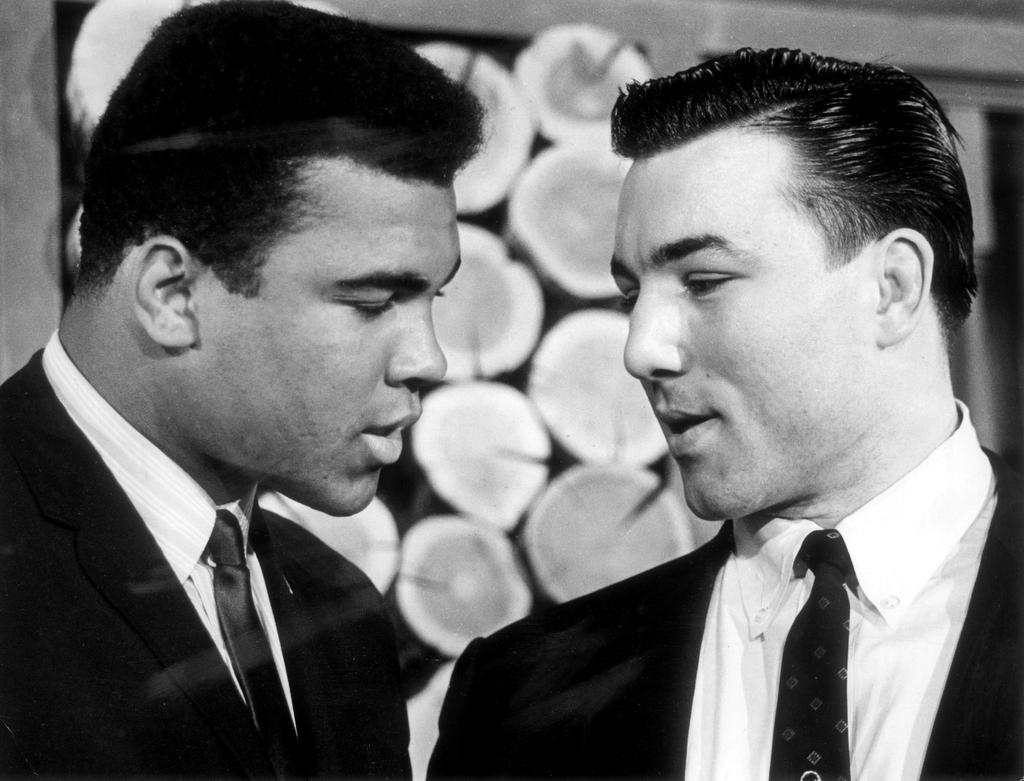 PHOTO: George Chuvalo turned up at Cassius Clay's (Muhammad Ali) contract signing on March 10, 1966, for his title defense in Maple Leaf Gardens, to be held March 29. Chuvalo posed with the world champ and today may be named substitute for WBA champion Ernie Terrell. (Boris Spremo/The Globe and Mail)

Media of the day referred to Muhammad Ali as Cassius Clay. In The Globe and Mail’s news story on the fight, Mr. Ali, in the first paragraph, is described as “Cassius Clay, the Black Muslim."

“I don’t know why they called him Cassius Clay,” former Globe and Mail photographer Boris Spremo said. “Maybe they were mad, because of the religion, and he didn’t go to the army. They couldn’t take it that he was Muhammad Ali now, instead of Cassius Clay.” 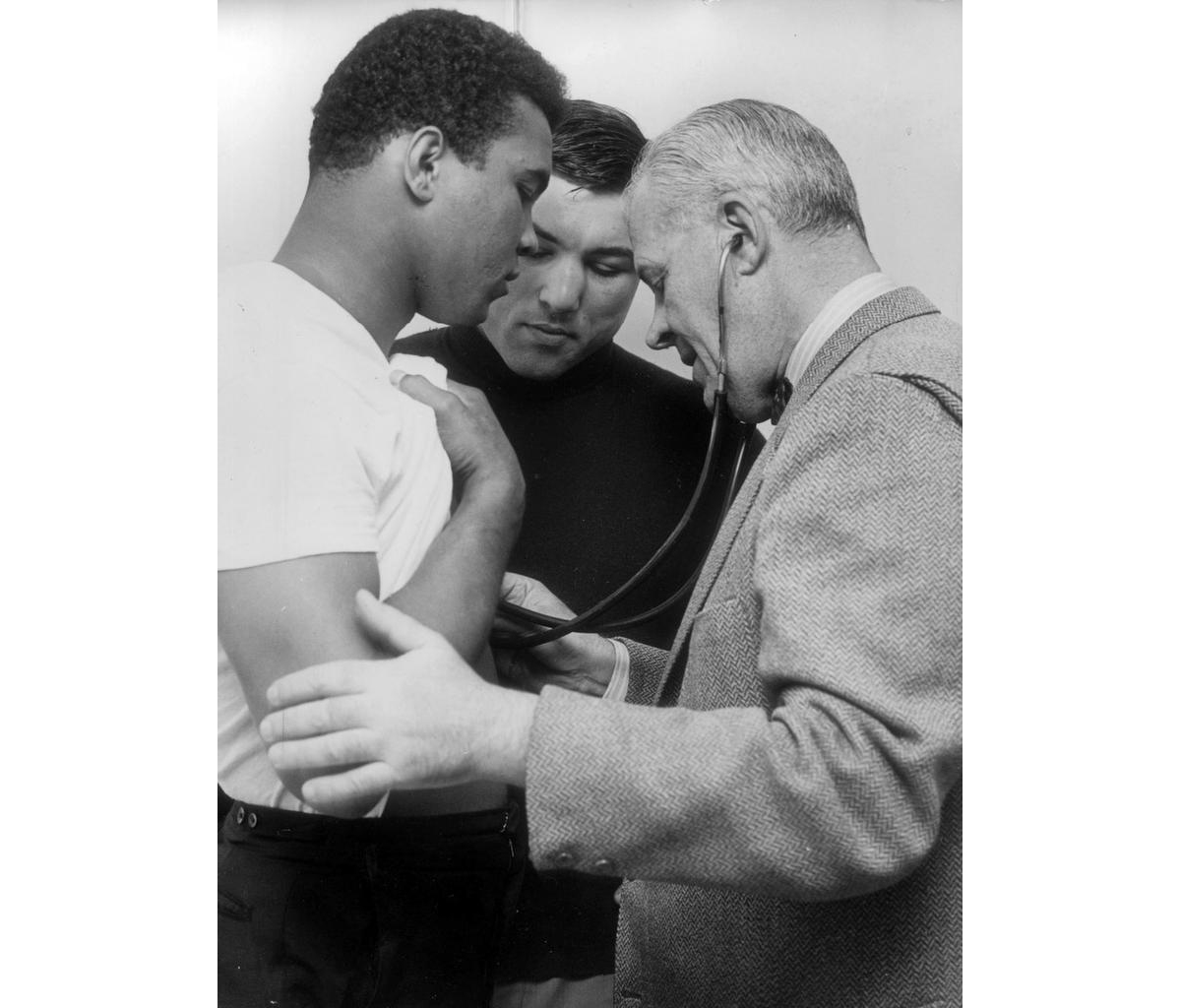 “George was always very to himself. He never showed any fright. He was just going like, ‘I’m going to win.’ That’s it. He only had three weeks to train. It was a disadvantage. I was at both training camps, Chuvalo and Ali. Ali was clowning around all the time. He wasn’t really working hard, like George. Ali came out and did a little speed bag work and sparring with a couple guys, but very short, one round maybe. After, he leaned on the ropes and answered a few questions. He was in a good mood.” 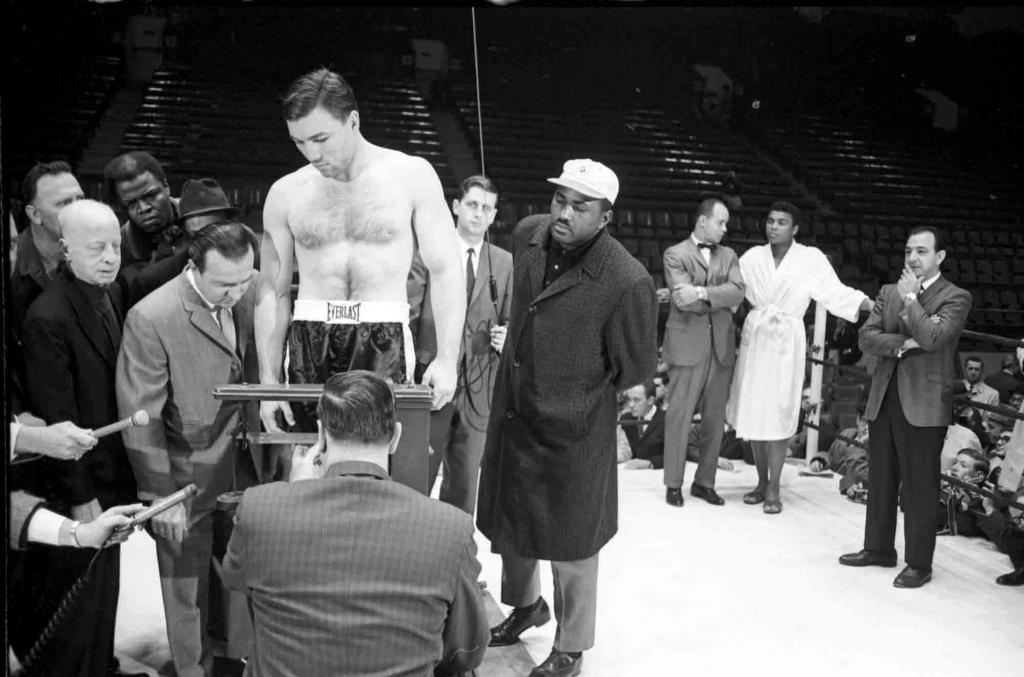 “George and I had become close friends. In this business, or any business, you have to concentrate on what you’re doing. If your heart goes another way, you don’t do a proper job. When I covered George’s fights, every time when he got hit, I almost felt I got hit.” 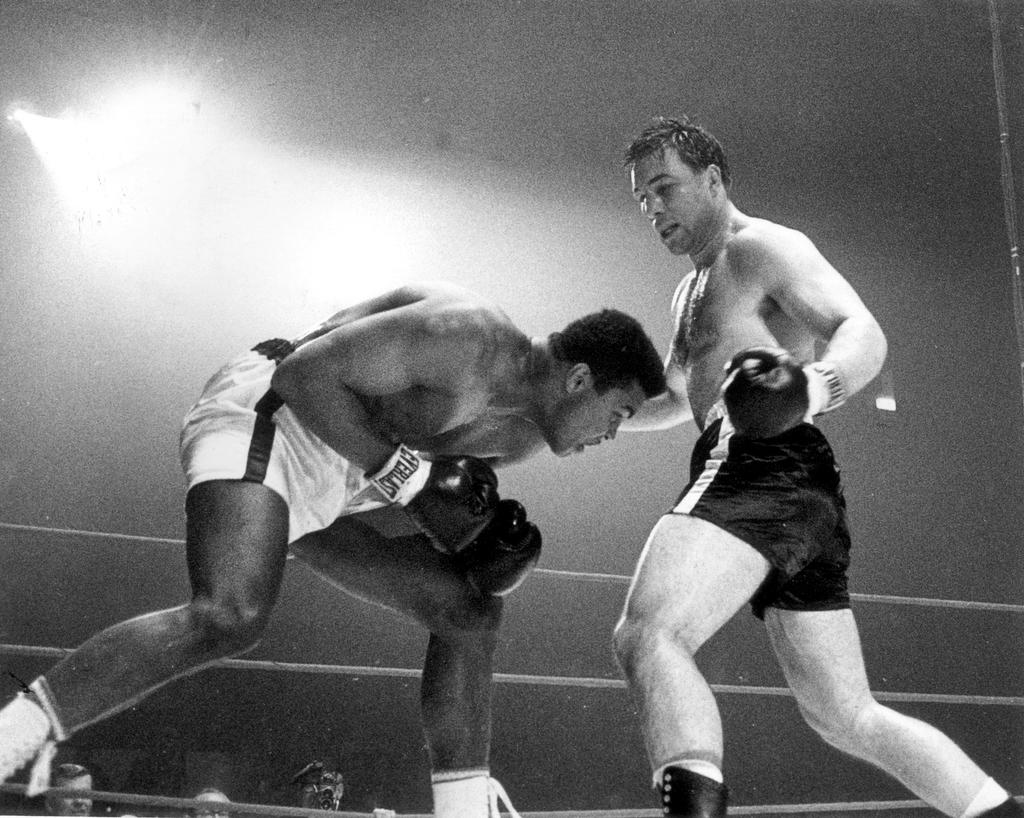 “The whole city was jumping up for George. It was the biggest boxing fight ever, in Toronto history. Maple Leafs Gardens was almost full, 14,000 people. It was pandemonium, people yelling and screaming. After, I asked George, ‘Could you hear that?’ He said, ‘I couldn’t. I concentrate so much on the fight that I just hear noise. I don’t hear any particular words.’ 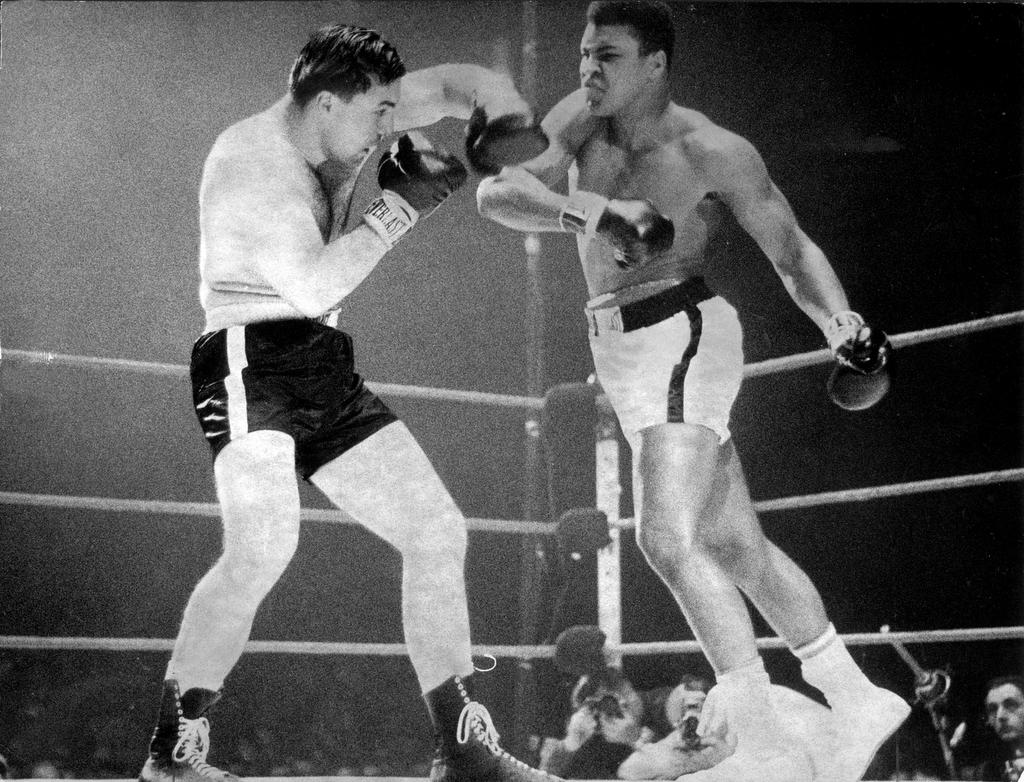 “I had a good spot. I was right on the ring. The ring was quite high, five feet above the ground. So you could put your elbows on the floor of the ring and you were right under the ropes. But I almost needed an umbrella. They were pounding each other and sweat was flying all over the place. Many times I had to clean my lens. But I didn’t mind. Good thing they didn’t have any blood, these two guys never bled.” 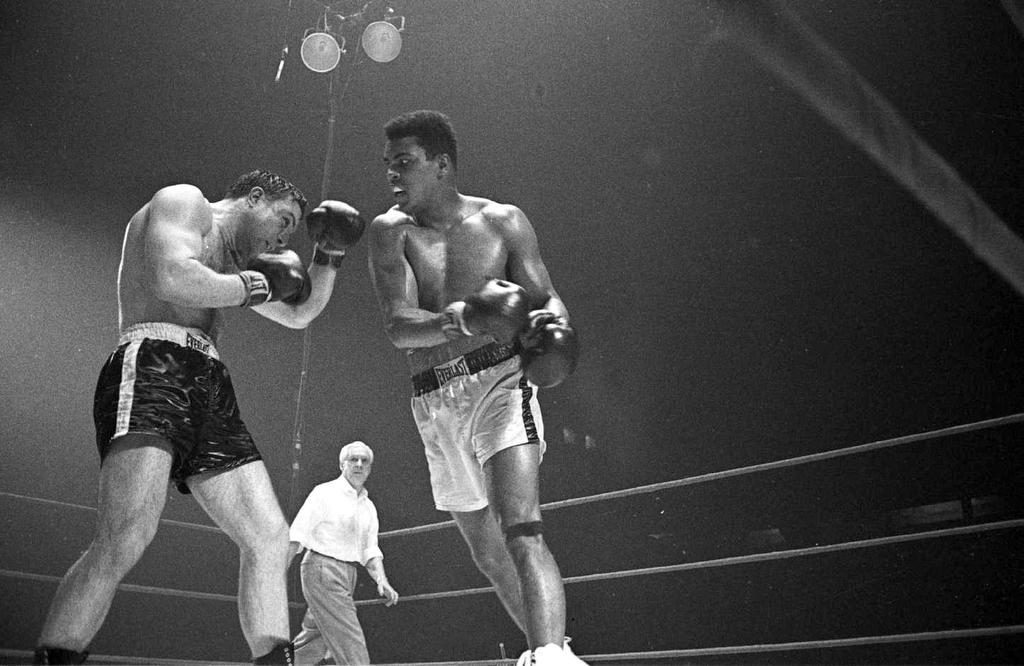 “Lots of people ask me what is your favourite picture. I say it’s hard to tell you because it’s like which daughter of your four daughters do you like best? But regarding that fight, there’s one picture, George and Ali exchanging shots, and the referee Jackie Silvers is in the middle. It’s nice composition. You’ve got all three of them together, involved in action.” 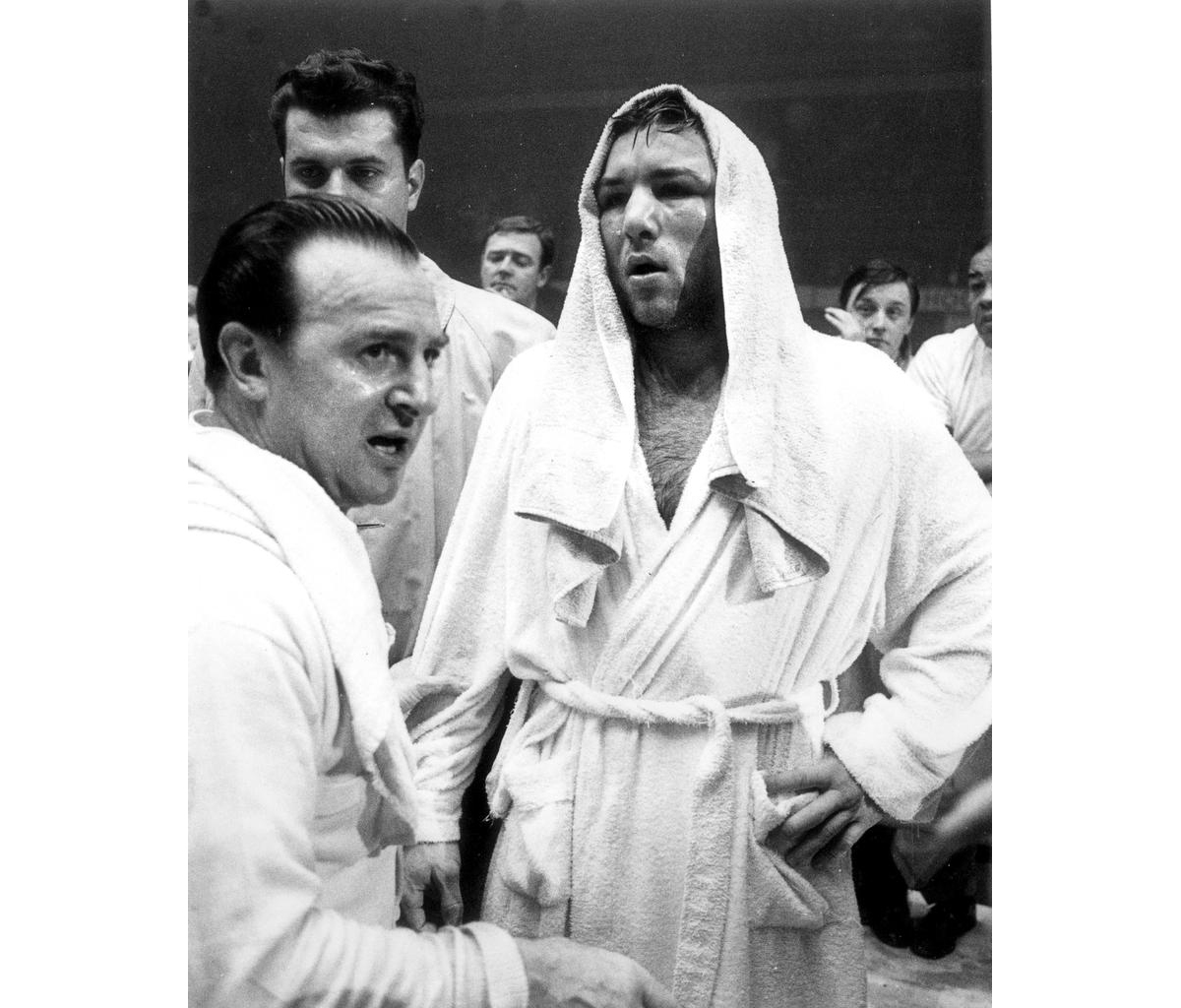 While Mr. Chuvalo survived 15 rounds, he had absorbed blows. One of The Globe’s stories described his face after the fight as “puffed as though he fallen victim to a hive of bees.”

“I could hear every punch. I just keep telling myself, ‘Keep going George, keep going George.’ Everybody was counting, three, four, five rounds, that’s it, because it was traditional that Ali finished the fight by the seventh round, it should be done.”