With an Olympic delegation stacked full of dignitaries, hockey players and artists, North Korea has played a surprisingly helpful role in supporting South Korea's hopes for a peaceful Pyeongchang Games.

But Pyongyang is also lending an Olympic hand in another way: It has employed its singers and its hockey players to stand alongside Seoul in poking fingers at Tokyo.

On Wednesday, the Korean women's hockey team, a unified group with players from both Koreas, squared off against Japan, the common colonial occupier of both countries. It was, like all of the united team's matches, a game with meaning far beyond what happened on the ice.

"Both North and South Korea, because of their shared history, have negative feelings against Japan," said Hosaka Yuji, a scholar of the South Korea-Japan relationship at Sejong University in Seoul. This hockey game, in particular, was a way to "really arouse feelings," he said.

The difference was obvious from the moment the Korean players touched the ice. Previous women's games have been punctuated by chants of "Korea! We are one!" and dancing to K-pop tunes. This time, the game kicked off with a pounding drum ensemble as fans screamed for "Victory!"

What seemed to matter most, though, is that Korea scored its first goal of the Olympics, a slow-moving dribbler from American-born forward Randi Griffin. When it crossed the goal line, ear-splitting cheers erupted in the Kwandong Hockey Centre.

"The games against Japan, more than anything else, have been something that have brought North and South Koreans together," said Ms. Griffin.

And playing side-by-side, Korean women had drawn blood against Japan in the Olympics.

Indeed, if North Korea's participation in Pyeongchang was the latest attempt at fostering harmony through athletics, this was the opposite. It was "sports diplomacy going the other way," said J. Berkshire Miller, a senior visiting fellow at the Japan Institute of International Affairs in Tokyo.

Bad feelings between South Korea and Japan regularly spill onto the field of play. At the London Olympics in 2012, a South Korean soccer player was temporarily denied his medal for hoisting a sign proclaiming Seoul's side in a territorial dispute with Tokyo. The following year, South Koreans displayed a sign disparaging Japanese people at a soccer game in Japan. In 2014, soccer spectators again raised Japanese ire by displaying a portrait of the South Korean who assassinated Japan's first prime minister, a man Japan considers a terrorist.

In Pyeongchang, too, the parlous international relationship has intruded into the Games: An NBC commentator was dropped from the air after comments about Japan that infuriated people in South Korea. A Japanese athlete created controversy by wearing a hat with an image that resembled a controversial flag used by Japanese soldiers during the Second World War.

North Korea, however, has demonstrated no such restraint.

The flags in the hands of its cheerleaders – dispatched to much fanfare wherever North Koreans are competing – continued to boldly bear the islets, including at Wednesday's game.

In an earlier performance attended by Mr. Moon, North Korean singers also changed the lyrics on a song to include the disputed territory, saying: "Hallasan and Dokdo, too, are my homeland."

This wasn't mere pandering. This was strategy, said Mr. Miller.

Because it "plays very well to the South Korean audience; it's a way to get in between efforts by Japan, South Korea and the U.S. to have a united stance against the North," he said.

"North Korea, from a strategic perspective, has always wanted to wedge between allies. And that's part of what they're doing this past week."

The islets issue is taken so seriously in South Korea that an airport train entering Seoul features English-language video with images of historical documents that, the video says, support the South Korean claim.

South Koreans have cheered North Korea's willingness to tweak Japan as "cider" – the kind of thing that has added a refreshing fizz to the Olympics.

"While anti-Japanese sentiments did rise, on the other hand, our people's firm stance on these issues was communicated," said Kim Jeong-hwan, an influential South Korean video blogger who goes by the online handle Media Mongu. He called the emergence of Japanese issues at the Olympics "a good thing."

The Japanese public hasn't quite seen it that way, suggesting Pyongyang has had some success in creating new divisions between neighbouring countries at a time Japan and South Korea have both said they want to push North Korea to denuclearize.

For the women's hockey team, meanwhile, the raw emotions still provoked by that history only added to the burden already loaded onto their team, one they tried the best they could to ignore.

"As far as Japan-Korea, the history between the two countries, we just saw ourselves as one team competing against our biggest rival," said Sarah Murray, the Canadian coach of the Korean team.

"We talked to the players before the game – not the history of Korea and Japan, but whoever wins this game is the best team in Asia. And we wanted to win."

Even in loss, however, the team claimed some redemption with its goal against Japan.

The team didn't "want to leave the Olympics not having scored a goal," Ms. Griffin said.

And, she added, "this was the best game we've ever played against Japan, so I think that's a huge step forward."

With reporting by Cynthia Yoo

How a North Korean defector became the mother of women’s hockey in the South
February 12, 2018 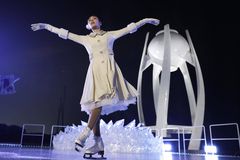 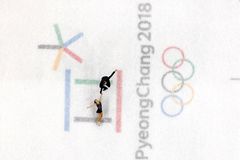