Keegan Messing's unconventional road to the Pyeongchang Olympics began on his family's pond in Girdwood, Alaska, where his mom Sally first set him down on wobbly legs at age three.

The 26-year-old heads into the men's long program in 10th place, just four spots back of Canadian teammate Patrick Chan.

"About 30 seconds before I got on the ice, I thought 'Oh my gosh, I'm at the Olympics,' and I almost wanted to cry, and I had to bring myself back to myself, and make it a little selfish and just go out and skate for myself," Messing said.

Messing was born in Girdwood, a resort town of glaciers and grizzly bears about 60 kilometres south of Anchorage. He's coached there by Ralph Burghart, a long-haired Austrian who skated in the 1992 Albertville Olympics. His mom Sally has worked at the Girdwood rink to make ends meet.

Sally was born in Edmonton, and raised in Peterborough, Ont., hence Messing's dual citizenship. She moved to Alaska where she met Messing's dad.

The plan was always to compete for Canada, but the logistics made it easier to skate for the U.S., and when he was just 14, he landed a triple Axel at the U.S. novice championships, earning himself a trip to Italy to compete.

But what he and his coach didn't know is that that international competition tied him to the U.S. He'd have to take a two-year break from skating internationally to be eligible to skate for Canada, which he did in the Sochi Olympic season and the one that followed.

"So not knowing the rules, we got caught in a little bit of a trap at the very start," Messing said. "But I can't be more proud to wear the Maple Leaf, this is always where I wanted to be, and I don't think I'd be where I am today without Canada. They have supported me from the start, and they have given me room to grow."

He earned his Olympic berth after finishing second behind Chan at last month's nationals in Vancouver, where several members of his family, including his Japanese grandmother, were in attendance. Members of his figure skating club met him at the Anchorage airport after the national championships, holding huge congratulatory signs.

Messing's heritage is Japanese. His great-great-grandfather Manzo Nagano was Canada's first Japanese immigrant, according to the Canadian Encyclopedia, among other historical sources. He arrived in Victoria in 1877 aboard a British steamer.

Nagano ran a shop in B.C., Messing said, until it burned down. He had two sons with two different wives before eventually returning to Japan in 1923, where he died a year later of a lung disease, likely tuberculosis.

In 1977, 100 years after his arrival, a mountain peak — Mount Manzo Nagano — was named for Messing's great-great-grandfather in a remote coastal area of northern B.C.

As one of the older competitors in the Olympic men's singles competition, Messing isn't sure if he has another Olympic cycle in him.

The skater, who lists his hobbies as stilt-walking, yo-yoing, solving Rubix cubes, camping in all seasons and rock climbing, plans to become a firefighter, following in the footsteps of his father and grandfather. 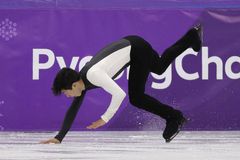 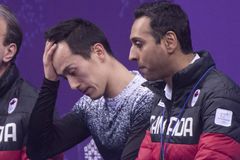 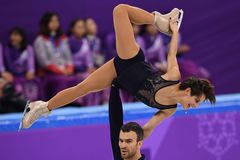