Even in defeat, Paul Mariner appreciates a good show.

The Toronto FC coach had just watched his team concede two late goals Tuesday to fall 3-1 to Mexican giants Santos Laguna in a crucial CONCACAF Champions League match at BMO Field. But he couldn't conceal his admiration for the slick visitors.

"They've got top, top players," Mariner said. "If you don't learn from looking at the Santos players, what they do, and how simple it is to play high-level football ... that's what I want our young boys to take away from it."

After weathering some early Toronto attacks, the Mexicans asserted their class by dominating possession and linking together long passing sequences to slice apart the home side. But TFC still looked good for a point until the 90th minute, when Santos midfielder Daniel Luduena scored to spoil Toronto's comeback and help his team take the outright lead in the group.

Candido Ramirez then killed the game off in the 92nd minute, slotting home a left-footed finish past goalkeeper Freddy Hall after Toronto had started pushing numbers forward in desperation.

Santos substitute Darwin Quintero opened the scoring in the 49th minute, while Toronto's Quincy Amarikwa replied in the 68th. Mariner said it was tough watching his team overcome a second-half deficit only throw the game away late.

"From my viewpoint it's just annoying and frustrating," he said. "The game is never over and 2-1 is not a done deal. At 2-1 you can still get something ... I just wanted us to keep playing the same way we played for 89 minutes, which wasn't bad."

Halfway through the four-game group stage, Santos sits atop the three-team pool with six points, three better than Toronto. But the Reds still face a visit to El Salvador and a difficult trip to Santos' Estadio Corona in Torreon, Mexico, where they suffered a 6-2 thrashing in April. Only the group winners advance to the next round.

Much of the pre-match hype centred around the teams' last encounter at BMO Field, when the sides played to a 1-1 tie in the first leg in the semifinal of last season's competition. That game featured an on-field melee after the final whistle that saw Quintero earn Santos' second red card of the night. A week later in Torreon, the Mexicans ran out 7-3 on aggregate.

This time around, Toronto was devastated to lose what players had been calling a must-win game. But the Reds were lucky not to concede any more goals against a superior Santos side. Edgar Leon was lively on the right wing while Oribe Peralta, fresh off an Olympic gold medal with the Mexican national team, gave Toronto's defenders fits all night.

"I know I'm coaching against them, but as an ex-forward it was an absolute joy to see their movement," Mariner said.

Peralta scored four goals at the London Games, including two against Brazil in the final, but couldn't bury his team's best chance early on. After his teammates sliced Toronto apart with a succession of backheels and short passes, Peralta was alone in front of a gaping net but couldn't connect with a simple pass in front of a yawning TFC goal in the 23rd minute.

Mariner cut a frustrated figure on the sideline, pacing and gesticulating as Santos set up camp in the Toronto half. But the match was still scoreless when the halftime whistle blew.

Quintero entered the game to start the second half and didn't take long to make his mark, blasting in a powerful shot from a narrow angle past Hall only four minutes after coming onto the pitch. Toronto's Ryan Johnson had made an important tackle seconds earlier, but was immediately caught in possession just 20 yards from his own goal.

Johnson could only watch as Santos' Marc Crosas split Toronto's defence with a delightful scoop pass to Quintero.

Amarikwa responded in the 68th minute, smashing in a right-footed shot from 10 yards through a maze of legs after Sanchez punched away a high ball.

The crowd of 10,951 at BMO Field found its voice after Amarikwa's goal, but they should have seen the warning signs when a black cat streaked across the field and past Hall's net in the 83rd minute.

Within hours of the final whistle, a (at)BMOBLACKCAT Twitter account was up and running with over 30 followers.

As time ran out, Luduena picked up the ball, skipped past lunging TFC captain Torsten Frings and played a spectacular give-and-go with striker Peralta before beating Hall. After the game, Mariner didn't hesitate to criticize Frings for the miscue.

"I don't like people diving in because if I dive in then I make a problem for my teammate and that's irresponsible," Mariner said. "I know what he's trying to do, but if you just keep him in front of you."

With the result, Toronto will be hard-pressed to advance the quarter-finals. The Reds had opened with a 5-1 win over Club Deportivo Aguila at BMO Field on Aug. 1, while Santos thumped the El Salvadoran side 5-0 in Torreon last week. While both TFC and Santos visit Aguila in September, the group will likely be decided when they meet on Oct. 24 in Mexico.

TFC forward Andrew Wiedeman was visibly dejected after the game, admitting he was thinking about stealing a win after Amarikwa's equalizer.

"We came in tonight wanting three points and not really wanting to settle for anything less," he said. "But when you get down to the 89th minute and you're tied 1-1, at that point you take it ... but it didn't come off that way, so we really put ourselves in a deep hole now." 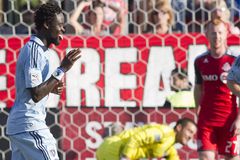 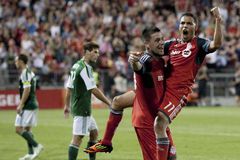