The deal marks the first time the 12-year-old firm – a global leader in a fast-growing "data classification" niche of the cybersecurity market – has received outside financing and follows a decision by top management to step up growth plans after Microsoft Corp. bought a rival firm.

Terms were not disclosed, but industry sources said funds managed by Blackstone's Tactical Opportunities arm are paying the employee owners of Titus about $100-million for a controlling stake. Current management will remain in place.

"We're at a point where we want to move fast," said Titus chief executive officer Tim Upton, whose profitable, 207-employee firm has been expanding sales more than 30 per cent a year and generates an estimated $40-million-plus in annual revenue. "Our market is lighting up, and being [self-financed] is good but you tend to be more cautious. We've played a very strong game below the radar. The time is now … to play an aggressive game. Clearly we're going to be a force to be reckoned with."

Viral Patel, managing director with Blackstone Tactical Opportunities, said in a statement: "We are excited to combine Blackstone's flexible capital and experience with Titus's market-leading solutions to continue to transform data-centric security. With data breaches at an all-time high, each day brings another example of the importance of protecting information."

Industry sources say private-equity players, including Blackstone, have been attracted by the industry's solid growth potential as cybersecurity breaches and data thefts increasingly plague corporations. In addition, tough new regulations set to come into effect in the European Union next May will heavily penalize companies operating in the EU that don't take adequate steps to protect sensitive consumer data. "That has people scrambling … and is going to be a real driver for us," said Mr. Upton, whose firm has increased its staff in Britain to 16 from three in the past year to increase sales efforts in Europe.

Titus sells software that enables users to flag e-mails and attachments with privacy markers such as "secret," "protected" and "classified." Its 950-plus customers include the North Atlantic Treaty Organization, the Canadian government, militaries in five G7 countries, Dell Inc. and Dow Corning Corp.

"We describe it as 'spell check' for [a company's] security policy," Mr. Upton said."It's about solving a core problem: Knowing what data you have and making people in the enterprise accountable of their data."

Titus grew out of a cybersecurity consulting firm that Mr. Upton and co-founders Stephane Charbonneau, Titus's chief technology officer, and cloud security vice-president Charlie Pulfer ran above a bagel store in Ottawa's west end. One customer asked them to create a tool to label e-mails based on the sensitivity of their contents, a task the group didn't think was a particularly big deal. After the trio put the solution on the market in 2003, it quickly attracted unsolicited inquiries from the Australian Federal Police and Goldman Sachs Group Inc. They decided to spin off Titus as a separate firm in 2005 and shut the consulting business.

Soon, Titus was providing classification software to 80 per cent of the Australian government and selling to the U.S. military and governments around the world, including Canada's, as well as major players in financial services. Lately, the company, whose software works with a broad range of core enterprise software programs, has evolved by expanding its offering to encompass cloud solutions offered by Microsoft and Google.

When Microsoft bought Titus' smaller Israeli rival Secure Islands for almost $100-million (U.S.) in 2015, the Titus team realized it was time to get bolder.

"We had many options," Mr. Upton said. "We wanted somebody who had a lot of muscle behind them so that we could be bold and make some aggressive growth decisions." That could include acquisitions, which Titus has never done, but that "would be another way we could move in the future, so we wanted somebody who could really execute on that," he added.

As Microsoft invades its turf, Ottawa firm Titus decides to go big
May 16, 2018 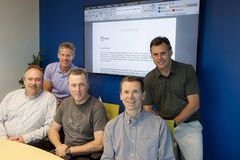