When the protests began, Sarah Mouawia was arrested by Sudan’s secret police and imprisoned for four days in a covert “ghost house” known as the Refrigerator because of its permanently bone-chilling temperatures.

The police taunted her and beat her brutally with a stapler. It slowed her down only briefly.

For the past six months, the 20-year-old medical student has kept marching for democracy, despite the terrifying dangers that she faced. In early June, she took refuge in a hospital operating theatre to escape a massacre that killed more than 100 protesters in Khartoum. Last Sunday, at the latest marches, she crawled through a ditch to avoid the bullets of security forces who opened fire on the demonstrators.

It was the bravery and persistence of Ms. Mouawia, and hundreds of thousands of protesters like her, that finally forced Sudan’s military regime back to the negotiating table this week. And in the early hours of Friday morning, the negotiators made a breakthrough.

Under the tentative deal, the military will share power with a coalition of opposition and protest-movement leaders. But the military will retain leadership of the transitional council for the next 21 months, until eventually handing control over to civilians.

While there were celebrations by thousands in Sudan’s streets on Friday, many pro-democracy activists are skeptical of the agreement. There is huge distrust of the military rulers. Nobody can be sure that they will fulfill the agreement’s terms. Even their promise this week to end Sudan’s month-long internet shutdown has not yet been fulfilled. Some activists predict that the street protests will need to continue, as they did last Sunday, despite the gunfire that killed at least 10 people on that day.

No amount of repression or violence has crushed Sudan’s democracy movement so far. After every attempt to shut them down, the protesters have bounced back with bigger demonstrations than ever.

“We can’t be broken,” Ms. Mouawia told The Globe and Mail in an interview in Khartoum this week.

“The revolution will overcome, no matter how long it takes,” she said. “I believe in this, more than ever.”

She suspects that the agreement on Friday could be just a ruse by the military regime to buy time. The revolution, she said, is not yet complete.

Young people such as Ms. Mouawia have been the backbone of Sudan’s extraordinary protest movement, which has gathered strength for much longer than anyone had predicted. “Those who created the revolution from the beginning were the youth,” says Amjad Farid, spokesman for the Sudanese Professionals Association, a key organizer of the protests.

“These young people have nothing to lose but their chains,” he told The Globe. “They’re the leaders and the decision-makers. The rest of us are their servants.”

For three decades, Sudan was ruled by the authoritarian regime of then-president Omar al-Bashir, whose military campaign against a rebellion in Darfur was so savage that he was charged with genocide and war crimes at the International Criminal Court.

Against all odds, the protesters toppled him. Their daily marches, culminating in a massive round-the-clock camp outside Khartoum’s military headquarters, put so much pressure on the government that it triggered a military coup in April, sending Mr. al-Bashir to prison.

The new military council has been as repressive as the previous government. It has shut down the internet, destroyed the protest camp, arrested and killed demonstrators and dumped their bodies into the muddy waters of the Nile.

Yet the protests have continued. They gained new strength last Sunday when hundreds of thousands of people flooded into city streets across Sudan.

One key reason for the movement’s strength is the wide range of grievances felt by the protesters.

It began last December with a growing fury at Sudan’s economic collapse: soaring prices for bread and fuel, disastrous cash shortages at banks, persistent poverty and unemployment. Yet it soon grew into a much broader movement, fired up by a range of issues: the cultural intolerance of the many Islamist purists in government; the severe limits on free speech and political organizing; the military atrocities in Darfur and elsewhere; and the state’s efforts to divide the country on ethnic grounds.

This is why Ms. Mouawia was so exhilarated by the spirit of the protest camp, known as the sit-in, which brought thousands of protesters together in tents and round-the-clock street rallies in April and May, uniting all of Sudan’s ethnic groups and classes in a peaceful movement. Darfuri activists from the west of Sudan were suddenly sitting together with university students from Khartoum and impoverished tea vendors who had migrated from the south.

“We felt alive,” Ms. Mouawia said. “We had the life we always dreamed about, the life we always sang songs about and wrote poetry about. This had never happened before: all the ethnic and racial groups being together. And I want that life again.”

Ms. Mouawia, in the third year of her medical studies, recalls how the protest movement grew out of the economic misery and political repression in Sudan last November.

“There were no beds in our dormitories, and no running water,” she said. “We were waiting two hours for buses. And we were oppressed from top to bottom. We were all suffering.”

The government had banned most student unions at university, and the traditional opposition parties seemed to accept the status quo, so the students felt hopeless – until they were galvanized by the biggest protest organizer, the Sudanese Professionals Association.

“They were like a prophet for us,” Ms. Mouawia said. “We finally felt we were capable of doing something.”

The protesters knew they would face attacks from the secret police and paramilitary groups. “We discussed the possibility of dying,” she said. “But we felt we had nothing to lose.”

At the first protest in late December, she wore a white laboratory cloak and the trousers that are favoured by Khartoum’s middle-class women, making it easy for the secret police to spot her as a protest member. She was arrested and beaten in the “ghost house.”

After that, she says, she learned the “hacks” that were needed to avoid arrest. She would wear casual clothes, as if going to a market rather than a protest, and she would learn to duck into the open doors of local homes to take shelter with sympathetic residents if the police arrived. “My hiding skills got better.”

When seeking to arrest a protester, the police would often recognize them by the dust or tear gas on their clothes. So she would slip into a nearby home and change clothes, pretending to be studying a textbook when the police arrived. “I was welcomed in every house, even when they were afraid of being tear-gassed,” she said.

When the sit-in began and Mr. al-Bashir was ousted, the protesters began to think they were on the verge of victory. Then came the massacre last month.

When the police and paramilitary forces attacked the protest camp in the pre-dawn hours of June 3, some protesters tried to form a human shield. They were gunned down. Witnesses describe how the police broke into the tents of protesters to kill and rape.

Ms. Mouawia and hundreds of others fled to a nearby hospital for shelter. The much-feared Rapid Support Forces, a paramilitary militia that has committed atrocities in Darfur, surrounded the hospital and fired guns, but the protesters were able to escape after more than six hours of hiding.

The next day, she felt devastated by the massacre, almost losing hope. But then she saw the protesters returning to the streets again. And last Sunday, she was marching again, despite gunfire and tear gas.

Protest leaders told the marchers to “prepare their shroud” – a reference to the shroud that would cover them in death. “It is ready,” the crowds replied. 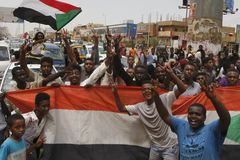 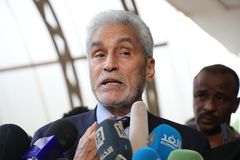 Explainer
What is happening in Sudan? A guide to how we got here
July 17, 2019 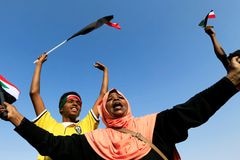