Brazil’s leading presidential hopeful, Jair Bolsonaro, publicly upbraided his son on Monday for threatening to shut down the Supreme Court in comments that set off a storm of criticism and prompted his main opponent to call the far-right candidate a threat to democracy.

Over the weekend, social media exploded over a video of comments made in July by Eduardo Bolsonaro saying the top court could be forcibly disbanded by the Army if it stripped his father of an electoral victory.

Chief Justice José Antonio Dias Toffoli issued a statement saying that any attack on the judiciary amounted to an attack on democracy and urged all authorities to respect the constitution.

Following the firestorm, Bolsonaro, a federal lawmaker, expressed his respect for the separation of powers and disowned the comments by his son, a 34-year-old member of Congress.

“I’ve already warned my boy. It was his responsibility. He has already apologized. It happened four months ago. He was asked a senseless question and gave an absurd answer,” said Bolsonaro, 63, in an interview with the SBT television network.

“The judiciary is obviously important. I was even hard on the boy. Anyone who says such a thing needs to see a psychiatrist,” he said. “As far as we are concerned, this is a closed chapter.”

Yet Haddad seized on the controversy to tell Brazilians that democracy was in peril. The Workers Party (PT) candidate has issued increasingly dire warnings as the latest opinion polls show the race seemingly out of reach, with nearly three in five voters backing Bolsonaro.

“If he has the courage to threaten democracy before the election, what do you think he will do if he wins?” Haddad said in Sao Paulo, a day after Bolsonaro renewed a vow to jail him for alleged graft and wipe the PT from Brazil’s political map.

“Either we toss aside this authoritarian tradition that Brazil has always had … or we are in danger, including physical, if we do not alert the country that the political opposition, judges and journalists are being threatened before the election has been decided,” he said at a news conference.

Bolsonaro is a seven-term member of Congress who has found wide appeal with an electorate seeking order after five years of economic and political crises. Haddad has faced strong headwinds as his party, a dominant force in politics in recent years, is one of many ravaged by corruption scandals.

Until his presidential run, Bolsonaro was best known for his defence of the 1964-1985 military government and being charged with hate crimes for misogynist, racist and homophobic rants. The Supreme Court rejected the racism charge, but has not ruled on a case in which he told a fellow lawmaker she was not pretty enough to rape. He has called the cases political persecution.

In a video taken in July of him speaking in a classroom, Eduardo Bolsonaro said the Supreme Court could be shut down if it countered his father. “One wouldn’t even need a Jeep. Sending a soldier and corporal would be enough to close the STF,” he said, using the acronym for the court.

The younger Bolsonaro posted another video Monday on his Twitter account criticizing the top court and backing his father’s proposal to increase its size from 11 to 21 members – something that Haddad said was a clear attempt to neutralize the court’s current justices.

Another justice, Alexandre de Moraes, asked public prosecutors to investigate the threat to close the Supreme Court as a possible violation of the country’s national security law. “You don’t joke with democracy, the state of law or republican stability,” he said in a statement that did not name Bolsonaro.

An MDA opinion poll published on Monday by transportation lobby CNT showed that Bolsonaro had 57 per cent of voter support, compared to Haddad’s 43 per cent. The numbers were in line with other polls that show Bolsonaro taking 59 per cent (Datafolha) or 60 per cent (BTG/FSB) of the votes.

The race came down to Bolsonaro against Haddad after the first round of voting on Oct. 7. As Brazil’s most polarized presidential campaign in decades entered its last week, tens of thousands of Bolsonaro’s backers gathered in several cities across Brazil on Sunday, where the vibe was more of victory parties than pre-election rallies.

Anti-Bolsonaro protesters gathered in fewer cities on Saturday for events that were mostly organized by a Facebook group of women voters who oppose him. 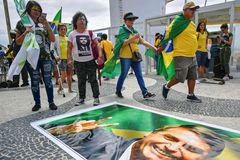 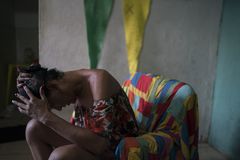 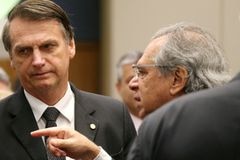