China has put a stop to all new purchases of Canadian canola, the industry says, in an escalation of what executives and analysts believe is retaliation over the arrest of a Huawei executive.

And Chinese importers say strict customs inspections have disrupted shipments of a broad range of Canadian agricultural products, an indication of a wider-reaching effort by Beijing to place economic pressure on Ottawa after it authorized extradition proceedings against Meng Wanzhou, Huawei chief financial officer.

"All agricultural products from all Canadian companies − once they arrive at Chinese customs, they will face very strict inspection,” he said.

“We are victims of deteriorating China-Canada relations.”

The Chinese government has denied that it is taking aim at Canadian goods, but said it had no new information Friday. “All relevant measures taken by the Chinese Customs Administration are normal quarantine measures, and are compliant with relevant laws and regulations, as well as international practice,” said foreign ministry spokesman Geng Shuang.

On March 1, China’s General Administration of Customs revoked canola-seed export rights for Richardson International Ltd., citing a lack of compliance with quality standards. The company’s vice-president of corporate affairs, Jean-Marc Ruest, has called that an “attack” on Canada and its agriculture industry, saying he is “firmly convinced” it is related to the broader dispute between Canada and China.

Beijing has demanded the immediate release of Ms. Meng, who has been accused by the U.S. of committing fraud related to violations of sanctions against Iran.

The measures against Richardson were taken the same day that Justice Canada issued an authority to proceed with extradition hearings for Ms. Meng.

But other companies have now also discovered that “Chinese importers are unwilling to purchase Canadian canola seed at this time,” the Canola Council of Canada said in a statement Thursday.

“Under the circumstances, Canadian canola-seed exporters who normally ship to China have no alternative but to supply customers in other countries who value high-quality Canadian canola,” council president Jim Everson said in a statement. The problem in China seems to primarily affect new sales, not existing contacts, he told The Western Producer.

A spokesperson for Agriculture Minister Marie-Claude Bibeau’s office said the Canadian Food Inspection Agency (CFIA) inspected the canola shipments before export to China and was confident the shipments met the foreign import requirements. Katie Hawkins said CFIA plant health experts also spoke with their Chinese counterparts this week and are working to find a “science-based solution” to the export concerns.

Prime Minister Justin Trudeau, speaking to reporters in Thunder Bay on Friday, said canola producers have faced a similar problem before, when China restricted Canadian canola in an attempt to control the spread of the crop disease known as blackleg. In 2016, the Trudeau government announced an agreement with China that would ensure continued access to the Chinese market for Canadian exporters.

“We’re going to roll up our sleeves and work with the Chinese officials to demonstrate that canola should continue to flow safely from Canada to China,” Mr. Trudeau said Friday. “It is something … we will continue to work on, the same way we were able to solve it in 2016.”

Conservative Leader Andrew Scheer said the canola dispute is a political issue, not a quality problem.

“The issue at hand is not Canada’s canola product. Rather, it is Justin Trudeau’s weak leadership on the international stage and in particular his failure to deal with the threats posed by the Chinese government,” Mr. Scheer said in a statement Friday.

Conservative MP Randy Hoback pointed out that Canada has not had an ambassador in China since John McCallum was fired from the post in January after he waded into Ms. Meng’s case.

“The reality is if we have a strong ambassador in China he can lead the way in making sure issues like this don’t come up. Because there’s nobody there, there’s nobody to talk to,” Mr. Hoback told reporters on Parliament Hill Friday.

In total, Canada exported $8.1-billion in agricultural products to China in 2017, according to federal statistics.

Major Chinese canola importers declined to discuss specifics of what is taking place. “We are just following the government’s instructions. We do what we are required to,” said Shi Liucun, general manager of the purchasing department for oils and oilseeds at COFCO, the Chinese state-owned agricultural giant.

Xu Hairong, manager of the purchasing department at the Beijing branch of Yihai Kerry Investments Co., Ltd., described a new caution toward Canada. “At the moment, there are still no clear instructions from government. We are also waiting for the government to provide us with a more specific policy on this,” he said.

Problems have arisen in the import of Canadian peas as well, confirmed Zhang Mingjie, senior business manager with the overseas resources department at Holley Group Co. Ltd., a large Hangzhou-based industrial conglomerate. “Pea imports are no longer that smooth,” he said. “Importers have become more cautious when it comes to imports from Canada.”

The full extent of issues for products outside canola is not clear: a diplomatic source in China said Canadian industry figures have not identified problems in shipping other agricultural products to China. The source was granted anonymity by The Globe and Mail because they were not authorized to discuss the matter publicly.

Chinese observers nonetheless say there is little doubt why problems have arisen.

“Everything goes back to relations between China and Canada,” said Fu Zhenzhen, senior agriculture analyst at Aige Agriculture. “Look at the volume of canola and canola oil China imported from Canada in the past. It’s huge. How could that be cut so much overnight? There must be political influence.”

The Richardson ban has affected the broader industry, she said, by putting a danger sign on Canadian product.

“Once this kind of thing happens, who would dare to take this risk. It’s possible that Canadian agricultural products would be stuck at customs,” she said. She discounted the possibility of seasonal reasons for the buying halt and also played down the quality issues cited by the Chinese government, saying the evaluation of harmful materials in food products “is subjective.”

Imports of Canadian product, she added “will not recommence unless tensions between the two governments have been fully resolved.”

China’s General Administration of Customs did not respond to a request for comment.

Chinese manufacturers can substitute canola with other imported oilseeds, including sunflower and cottonseed, said Lucia Vancura, director of global markets for Meros Consulting.

As result, “there is not really any reason to think China will feel huge market pressure to solve this dispute quickly,” she said.

Chinese authorities have previously used customs inspections and informal boycotts to slow the flow of goods from other countries in the midst of politics and diplomatic disputes, including Norwegian salmon, South Korean cars and bananas from the Philippines.

“China has a long history of employing extralegal methods to retaliate against foreign countries with which it has grievances,” said Lester Ross, a Beijing-based partner with WilmerHale who specializes in advising foreign companies on regulatory issues in China.

The action against Canadian agricultural products comes amid a renewed effort to reach agreement in trade talks between China and the U.S., and problems with canola shipments highlight a key issue in those talks, Mr. Ross said.

When China takes economic retaliation, “you have farmers and processors and shippers that all suffer innocently,” he said.

”And it doesn’t help China’s reputation around the world when people realize that there are these innocent victims who suffer.”

With reports from Michelle Zilio and Alexandra Li 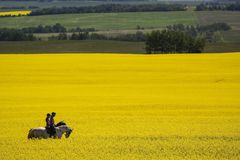