The scenes were familiar: another aged Arab leader, this time 75-year-old Omar al-Bashir of Sudan, being forced from power by a young and jubilant pro-democracy crowd on Thursday, just nine days after Algeria’s 82-year-old president Abdelaziz Bouteflika was ousted by similar throngs of flag-waving demonstrators in his country.

The uprisings recalled the heady days of 2011 when the Arab Spring revolutions rippled across North Africa and the Middle East, toppling dictators in Tunisia, Egypt and Libya – a wave of hope that eventually crashed against the rocks of civil wars in Syria and Libya, as well as a counter-revolutionary military coup in Egypt.

So, do the popular revolts in Sudan and Algeria herald the start of a new, or renewed, Arab Spring? It is, as former Chinese premier Zhou Enlai allegedly quipped about the French Revolution, too soon to tell. 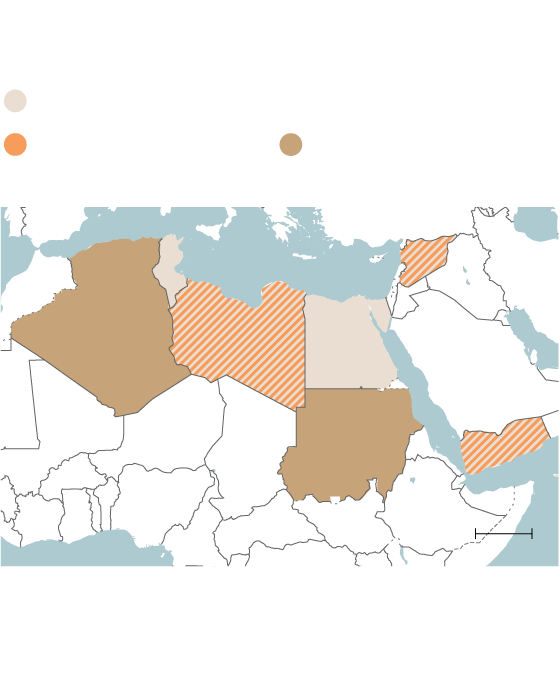 Arab Spring then and now: Which 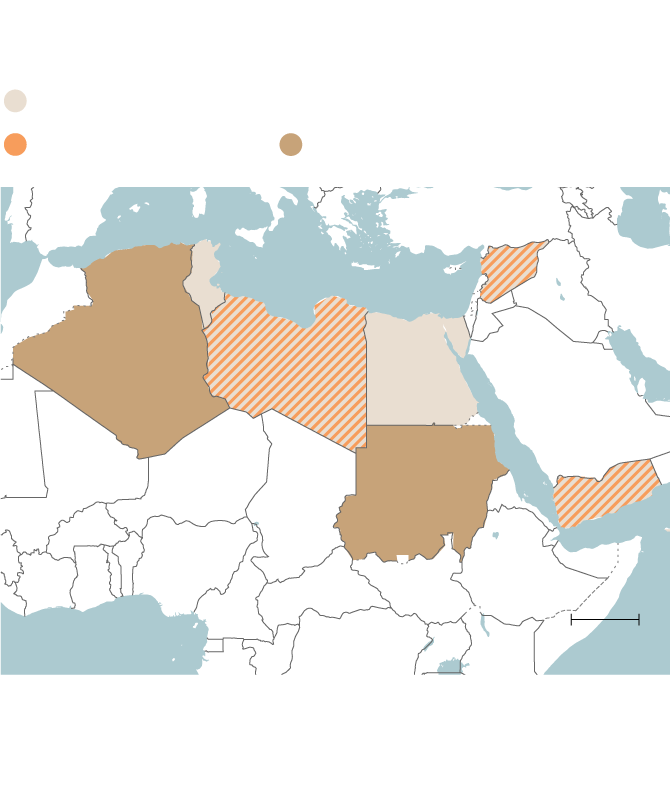 Arab Spring then and now:

Which countries rebelled against dictatorship? 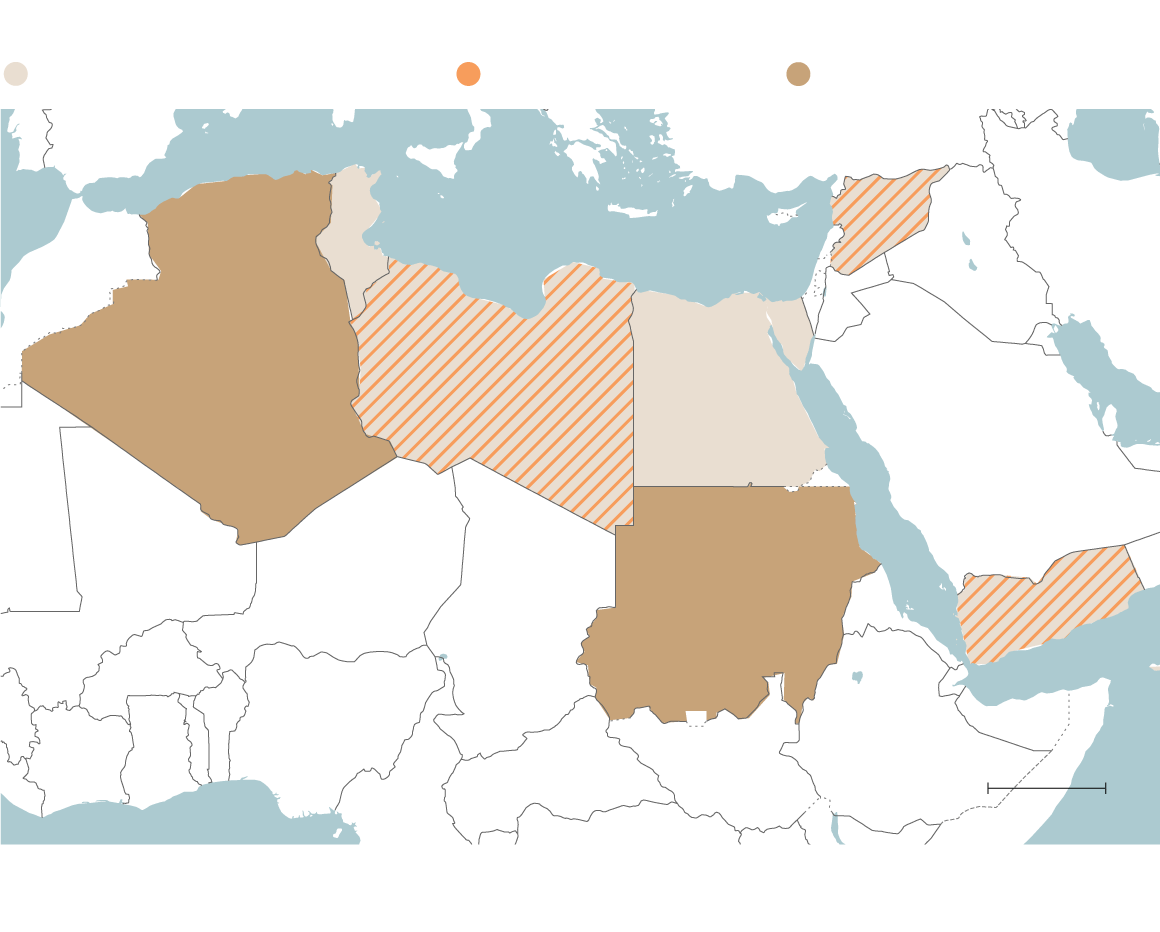 Arab Spring then and now: Which countries rebelled against dictatorship?

The international scene has shifted dramatically over the past eight years. In 2011, then-U.S. president Barack Obama gave rhetorical support to the protesters in Egypt and the NATO military alliance lent air power to the rebellion against Moammar Gadhafi’s regime in Libya. Contrast that with the happenings at the White House this week, where President Donald Trump, leaned in behind the counter-revolutionaries by hosting Egypt’s strongman ruler Abdel Fattah el-Sisi even as crowds were chanting for change in Khartoum and Algiers. The countries that are today broadcasting military might in the region – Russia, Egypt, Saudi Arabia and the United Arab Emirates – are those who favour status-quo authoritarianism.

Still, the Sudanese and Algerian crowds have been inspired and emboldened by the earlier revolts. “It is of course [part of the Arab Spring], but it also has its own life,” Khalid Albaih, a popular Sudanese cartoonist and political activist, told The Globe and Mail on Thursday.

Sudanese, Mr. Albaih said, were “the most excited we have been in 30 years” after the military announced Thursday that Mr. al-Bashir, who had ruled the country since a 1989 coup, and who is wanted by the International Criminal Court for alleged war crimes, had been removed from office and placed under arrest. But the protesters were disappointed just hours later by the military’s declaration that it would annul the country’s constitution and rule the country directly for a two-year period.

Sudan, for now, appears to have merely swapped one strongman for another, with Awad Mohamed Ahmed Ibn Auf, who served as Mr. al-Bashir’s vice-president and defence minister, heading a military council that said it was now in control of the country. Sudan’s opposition said it would keep up their protests.

“We understand the need to keep this peaceful,” Mr. Albaih wrote in a message from Copenhagen, his home in self-exile. He said the protesters would continue “letting the army know that they did their job – if they did – but [also telling them] it’s not their job to rule.”

Indeed, while Mr. al-Bashir and Mr. Bouteflika are both now out of office, it’s not yet clear whether democracy will be allowed to take root in their countries, or whether power will instead remain concentrated in the hands of a small elite.

Tens of thousands of Algerians have continued their daily street protests even in the wake of Mr. Bouteflika’s departure, demanding that interim leader Abdelkader Bensalah, a close Bouteflika ally who took power on April 2, follow his long-time boss into retirement.

Mr. Bensalah has called a July 4 presidential vote, but with no history of free elections in the country, many Algerians are suspicious that regime insiders will seek a way to remain in power. Algeria’s last competitive election, in 1992, was cancelled by the military to prevent an Islamist party from winning the poll – a move that plunged the country into a decade-long civil war.

“The fact that in both countries [Sudan and Algeria] a military council ‘responded to the people's call’ makes it look more like Egypt in 2013 than the Arab world in 2011,” said Youssef Cherif, a Tunisia-based political analyst, referring to the 2013 Egyptian military coup that ousted a Muslim Brotherhood-led government that had been elected following the 2011 ouster of Hosni Mubarak. “A genuine democratic transition is hard to achieve when it's led by soldiers with no democratic education,” Mr. Cherif said.

Adding to the broader sense of turmoil in the region is the escalating military conflict in Libya, which has lacked a unified government since its own 2011 revolution, which saw Mr. Gadhafi ousted and eventually killed by protesters. General Khalifa Haftar, a warlord who has ruled eastern Libya since the fall of Mr. Gadhafi, last week ordered his troops to march west toward the capital city of Tripoli, which is ruled by the United Nations-backed Government of National Accord.

Gen. Haftar’s advance is backed by the same forces – the Egyptian military, Saudi Arabia, Russia and the UAE – that supported the 2013 coup in Egypt, putting Gen. Haftar firmly on the side of the authoritarian counter-revolutionaries.

Mr. Trump, who this week hailed Mr. el-Sisi as a “great president,” appears to favour the same camp. Promoting democracy, at least in the Sunni Arab world, plays no role in Mr. Trump’s Middle East policy, which is focused on supporting Israel and confronting Iran.

“The regimes that are still in place in both [Sudan and Algeria] know they don’t have to worry very much about Trump, given how Trump has handled el-Sisi and MBS,” said Noha Aboueldahab, a visiting fellow at the Qatar-based Brookings Doha Centre. MBS is the nickname of Saudi Arabia’s Crown Prince Mohammed bin Salman, who is still viewed as an ally by the Trump administration, despite the furor over the prince’s alleged role in the murder of journalist Jamal Khashoggi.

Osama Gaweesh, an Egyptian broadcaster who has been living in exile – first in Turkey, now in England – since the 2013 coup, acknowledged that Mr. Trump’s support for the likes of Mr. el-Sisi “makes our work more difficult.” But Mr. Gaweesh said the fall of Mr. al-Bashir and Mr. Bouteflika had nonetheless inspired fresh optimism that the Arab Spring could be revived in Egypt and elsewhere. “Six years ago, we lost our hope because of the military coup and the counter-revolution. What’s happening in Sudan and Algeria is definitely giving us hope again.”