Donald Trump has cleared the most significant challenge to his presidency, with an acquittal in the Senate that came at the conclusion of a charged and partisan impeachment trial. But Mr. Trump’s legal woes are far from over. He faces no shortage of challenges to his presidential authority outside of Washington.

Democratic state attorneys-general, led by California and New York, have sued the Trump administration more than 100 times since he took office, successfully using the courts to block several of the President’s policies on gun control and health care. Many more such cases are set to be decided this year.

“There is a lot happening that ties into some of the biggest fault lines in American politics right now,” said Paul Nolette, a political scientist with Marquette University in Milwaukee, who closely studies state-federal relations.

Mr. Trump is not the first president to be sued by state governments. The trend dates back decades, though such lawsuits mushroomed in popularity during the second term of the Obama administration as Republican states managed to score key victories on Democrats’ signature issues.

Now, with Mr. Trump in the White House, “Democrats have taken that baton and run with it and are essentially challenging just about every major policy initiative coming out of the Trump administration,” Prof. Nolette said.

States have been particularly successful in persuading courts to issue nationwide injunctions blocking Trump administration policies across the country, not just in their own state.

The trend has alarmed some conservative members of the U.S. Supreme Court.

"The routine issuance of universal injunctions is patently unworkable, sowing chaos for litigants, the government, courts, and all those affected by these conflicting decisions,” Justice Neil Gorsuch wrote in a January 27 decision that overturned an injunction against a Trump administration plan to deny green cards to immigrants who have used public benefits such as food stamps.

As the lawsuits between states and the Trump administration continue to pile up, here are some of the highlights from cases won or lost by the states, or that are still pending. (Five additional cases have been settled out of court.)

Cases the states won (40 in total)

Last year, New York led 19 states in a lawsuit that successfully forced the Trump administration to abandon plans to ask about citizenship as part of this year’s census. Several Democratic states also won a 2018 lawsuit against the Department of Justice preventing the President from withholding federal grants to immigration “sanctuaries” – states that block local law-enforcement agencies from co-operating with federal immigration investigations.

California and Massachusetts also led a group of 20 Democratic states that won a nationwide court injunction in September against a Trump administration plan to expand the amount of time children and families could spend in immigration detention.

In August, nearly two dozen states sued the Trump administration over a plan to deny visas and green cards to immigrants who had used federal programs for low-income households, such as Medicaid and housing vouchers. Federal courts in New York, California and Washington simultaneously issued temporary nationwide injunctions in October blocking the new rules. The U.S. Supreme Court overturned the injunctions in a Jan. 27 ruling, though several of the state lawsuits continue to work their way through the courts.

Democratic states won a court victory in November blocking a Trump administration plan to cut off federal funding to health-care companies unless they allowed employees to object to performing medical procedures that conflicted with their religious beliefs.

Dozens of states also won a nationwide injunction in 2017 against a Trump administration plan that would have allowed employers to opt out of covering birth control under the federal Affordable Care Act.

California and Washington each won court injunctions in 2019 that forced the Trump administration to release federal funds to organizations such as Planned Parenthood that provide abortion services or referrals. The court order only applies in those two states.

The entire Affordable Care Act – Barack Obama’s signature health-care law – is expected to face an important legal test sometime this year , when a Texas court is expected to rule on whether the legislation is unconstitutional.

Twenty states won a national injunction in November that prevented the Trump administration from allowing blueprints for 3-D-printed guns to be widely shared online.

The case stems from a long-running court battle involving Defense Distributed, a company that created blueprints for a gun that could be downloaded from the internet and made using a 3-D printer. When Mr. Trump took office, the federal government settled with the company, clearing the way for Defense Distributed to share its firearm blueprints online. Concerned that allowing 3-D-printed guns would encourage the spread of untraceable firearms, the states sued and won.

Cases the states lost (17 in total)

Mr. Trump declared a national emergency at the U.S.-Mexico border in February, 2019, a move that allowed him to redirect military funding to pay for the construction of a border wall.

California led a coalition of 20 states that sued to stop the funds from being spent. They won a preliminary injunction in the spring, but it was later overturned by the Supreme Court.

In September, the Pentagon began cancelling US$3.6-billion worth of military construction projects to free up the funds for about 175 miles (about 280 kilometres) of border-wall construction. That funding was briefly delayed by a court injunction, which was overturned on appeal earlier this month . The Trump administration is now reportedly preparing to divert another US$7.2-billion in military funding to construct a border wall.

The U.S. has long allowed people to deduct a portion of the taxes they pay to state and local governments from their federal income tax. But in 2017, Congress passed a series of tax cuts that included a US$10,000 cap on those deductions.

The change was a blow to residents in high-tax states such as California and New York, which lost a lawsuit challenging the practice in federal court. (The states are appealing.)

Dozens of states began allowing local governments to create charitable funds to pay for services, in hopes that residents could then claim a federal charitable deduction for those payments. But the Internal Revenue Service put a stop to that practice in June.

The Supreme Court ultimately upheld the final version of the travel ban in a 5-4 ruling in 2018, arguing that the President had broad authority over immigration and border-control policies.

The ban prevents citizens of Libya, Iran, Somalia, Syria and Yemen, along with North Korea and Venezuela, from receiving visas to travel to the U.S., with rare exceptions. Since it took effect, visas issued to citizens of most of the countries have plunged.

The Environmental Protection Agency announced in September that it would deny California a waiver from federal emission standards, upending a long-standing practice that had allowed California and other states to set their own strict rules on emissions requirements for automakers.

California and 22 other Democratic states are suing to overturn the decision, while 13 states with Republican attorneys-general have filed court briefs backing the Trump administration.

The lawsuit is just one out of dozens that states have filed to block Mr. Trump’s efforts to undo many Obama-era environmental policies.

In an unusual twist, the Trump administration opened an antitrust investigation into a deal that California struck last year with four automakers on stricter emissions standards for future model years of vehicles.

Dozens of states sued Mr. Trump in September, 2017, after he announced that he would end Deferred Action for Childhood Arrivals (DACA), a program introduced by Mr. Obama that protected young people brought to the U.S. illegally as children from being deported.

A California federal judge issued a nationwide injunction preventing Mr. Trump from rescinding DACA. The injunction was upheld on appeal later that year, forcing the federal government to continue to renew the two-year work visas given to DACA recipients.

The U.S. Supreme Court began hearing arguments in the case in November and is expected to issue a ruling by the summer.

As the House of Representatives was voting to impeach Mr. Trump in December, attorneys-general from Maryland and D.C. were in a Virginia court arguing that the President has violated the U.S. Constitution by illegally profiting from his position.

Lawyers for the two states argued that foreign diplomats had attempted to curry favour with Mr. Trump by booking rooms at a Trump International Hotel near the White House, to the detriment of taxpayer-supported hotels and convention centres in their jurisdictions.

Their case centres on an obscure section of the Constitution known as the emoluments clause, which restricts federal officials from accepting gifts from foreign governments or U.S. taxpayers.

Almost as important to the states than winning a judgment in the case, the court proceedings could force Mr. Trump to hand over financial information about his business dealings as part of the discovery process – including tax records that Democrats have been pushing to be released since Mr. Trump took office.

The Supreme Court is set to hear three other cases on whether Congress can force Mr. Trump to release financial records this year . 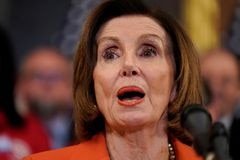 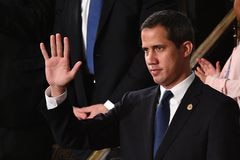 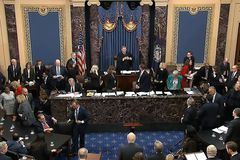