When David Byrne helped write those lyrics for the Talking Heads song Once in a Lifetime in 1980, he couldn’t have possibly had a pandemic-era Toronto International Film Festival in mind. But Byrne’s words felt prescient all the same on Thursday night, as TIFF devotees drove, not walked, into the world premiere of David Byrne’s American Utopia, the new Spike Lee-directed concert documentary that kicked off the 45th edition of TIFF in the most head-shakingly of manners.

Instead of celebrating the start of another week and a half of films, celebrities and corporate-sponsor activations with a gala presentation at Roy Thomson Hall, TIFF 2020 opened with a drive-in screening at the RBC Lakeside Drive-In at Ontario Place, where the staff wore masks, the snacks were individually wrapped and the applause was replaced by car honks. Pulling into my previously assigned seat, er, parking spot, I couldn’t help but ask, yes, how did we get here? (I should also take this moment to note that, while my house is merely fine, I am indeed lucky to have a beautiful fiancée. Hi!)

Read more: Tickets, reviews, how to watch – here’s everything you need to know

Historically, TIFF’s opening nights are shaky affairs. The programming choices are weighed down by myriad festival, corporate and studio politics (will I ever let the festival live down its decision to open with Score: A Hockey Musical? No). The attendance tends to be disappointingly sparse, sometimes due to sponsor-affiliated ticket-holders who curiously play no-show. And the genuine buzz of the festival is usually highest the following night, when the big Hollywood players fly into town. But this TIFF is of course not like the others, and Thursday’s drive-in special turned out to be a delightful – and delightfully surreal – event that I wouldn’t have missed for the world.

With seemingly more on-site staff than actual audience members, the process of checking in, finding your spot and ordering concessions was seamless. (One bump in my particular road: My car battery suddenly decided to warn of near-death just as it was time to tune into the FM station designated for sound; luckily, it survived.)

The lakeside vista was beautiful, and the massive screen was easily visible from every angle. There were familiar faces (TIFF co-heads Joana Vicente and Cameron Bailey), special guests (the Toronto-raised percussionist Jacquelene Acevedo, who performs in the film) and special-ish guests (Toronto Mayor John Tory, federal Heritage Minister Steven Guilbeault and Ontario’s Minister of Heritage, Sport, Tourism and Culture Lisa MacLeod, the latter of whom announced $1.6-million in provincial funding to “stabilize” TIFF). Oh, and there was an intensely blue-hued roadway in place of a red carpet, a drone flying overhead for reasons unknown and Mazda technicians on standby in case your car died.

It was an intensely weird evening, but a wonderful one, too.

It helped immensely that TIFF programmers nabbed an opening-night film that both played to the organization’s best instincts and spoke to the moment. By capturing a 2019 performance of Byrne’s Broadway show with grace and style to spare, Lee delivers a film that transcends a simple cast recording. From its joyful and exuberant opening half to a late-game moment of deep and sombre introspection, this is thoughtful pop performance art captured with the propulsive power of cinema.

As a grey-suited and impressively lithe Byrne tiptoes around the stage, a group of similarly clad dancers and musicians behind him executing a choreography best described as “ironic,” the concert-slash-film deftly shifts in mood and purpose. A house party, then a science lesson, then a cultural essay, then a political protest. But always – always – with a fierce rhythm and energy unique to the 68-year-old, eternally impossible-to-classify Byrne.

Lee is also careful to maintain the focus squarely on what’s unfolding on the stage. Save for the very end, there are no cute or chatty backstage moments and almost no audience-reaction shots (except for exactly three instances that the director allows during a give-the-people-what-they-want performance of Burning Down the House). You could compare and contrast Lee’s work here with Jonathan Demme’s iconic 1984 Byrne chronicle Stop Making Sense, but any time spent doing so will be wasted. These are two different visions for two different Byrnes for two different eras.

When the show closes with Talking Heads' Road to Nowhere, though, it is tempting to again read the current moment in the lyrics: “We’re on a road to nowhere / Come on inside / Taking that ride to nowhere / We’ll take that ride.” But while the route out of here, from this year and this TIFF to the next, is uncomfortably unclear, there is a distinct air of hope, too. “Maybe you wonder where you are / I don’t care / Here is where time is on our side / Take you there, take you there.”

The 45th edition of TIFF runs through Sept. 19. David Byrne’s American Utopia plays TIFF on Sept. 16, 6 p.m., via Bell Digital Cinema, before it will be available to stream on Crave with HBO starting Oct. 17. 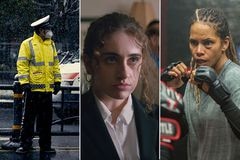 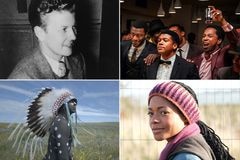