After 72 episodes, gallons of blood, acres of severed limbs, trailers full of European character actors and one unfortunately placed Starbucks coffee cup, HBO’s Game of Thrones is finally coming to a close Sunday night. Yet given the divisive nature of the show’s eighth season – in this critic’s opinion, a near-total disaster that has undermined all the careful character and narrative work that preceded it – there is simply no conceivable way that the series finale will please everybody. Or even anybody.

If GoT showrunners D.B. Weiss and David Benioff have been paying attention to television history, though, there are enough lessons available on what to do, and what not to do, when wrapping up an episodic epic such as theirs. Despite the inevitable disappointment that Sunday promises – unless, I dunno, Arya kills Dany, anoints Tyrion and Davos her co-hands, discovers Syrio was alive all this time in Dorne, and then institutes a new rule that everyone in Westeros gets one free dragon ride – here are five ways that the GoT team can either stick the landing or crash and burn, all gleaned from TV’s best and worst small-screen send-offs.

Valar dohaeris: The Game of Thrones that rulers must play for power

Shawn Ryan’s FX series The Shield is celebrated for many worthy achievements – making Michael “the Commish” Chiklis a sex symbol, kick-starting Walton Goggins’s career – but it also delivered one of the most satisfying finales ever, equal parts closure and ambiguity. If GoT were to ape Ryan’s approach, it might involve Dany facing justice (re: death by fire) for her King’s Landing massacre, Jon banishing himself to the North out of shame, and Sansa dismantling the feudal system ... but with the episode’s final seconds revealing that the Night King was not the only threat to the seven kingdoms, and that Westeros is destined to repeat this cycle of destruction and renewal over and over. It’s the feel-good-no-wait-bad ending that aligns nicely with George R.R. Martin’s sensibilities.

But what if GoT doubled down on the ambiguity? As polarizing as David Chase’s Sopranos finale was when it first aired, it’s since aged like a fine chunk of parm. Maybe it doesn’t matter who lives or who dies at the end of GoT, but rather the journey we all endured on the way to the Iron Throne (which is essentially a pointier version of Tony’s Bada Bing office). To that end, a Sopranos-y conclusion would find Dany summoning the likes of Tyrion, Davos and Jon to the Red Keep, and then, just as special guest-star band Journey begins playing the opening chords of Rains of Castamere ... blackness.

Another finale that was greeted with jeers when it aired but has since taken on an air of genius – Larry David and Jerry Seinfeld’s prison send-off to their quartet of awful human beings. And since GoT is chock full of awful human beings, why not close things off giving every character the justice they deserve: Dany is burned alive, Jon is beheaded by Sansa for siding with the Dragon Queen over the North and Bronn is awarded Casterly Rock – and just before the Iron Bank of Bravos comes calling, looking to collect on Cersei’s debt. Yada yada yada, Arya becomes queen, with Davos as her hand. Because she’s gonna need it.

Absolutely no one is going to like this pet theory that I’ve been carrying around in my pocket, but: What if GoT’s Westeros and Essos are actually ... Europe and Africa, 45 hundred million years ago or something? What if the final moments of GoT show the entire civilization being wiped out due to a completely unanticipated cataclysm (say, an apocalyptic winter from the north, a more destructive force than even the Night King could offer). Then the episode flash-forwards à la Battlestar Galactica to show that, hey, we were on Earth all along. It would respect what I believe is Martin’s ultimate lesson – that our vanity ensures that arbitrary conflicts will forever overshadow humanity’s true threats – and also remind everyone what a truly bananas ending Ronald D. Moore’s Battlestar Galactica reboot tried to sell.

What is Westeros if not a place where everyone knows your name? (Well, except Arya, a girl who has no name.) Sometimes you just want a finale that leaves everyone more or less where they are, and makes you feel good that things could pick right back up again. To that effect, GoT could end with Dany ruling as madly as her father, but Tyrion accepting that Westeros is always going to be a hellish place, and maybe he’d be better off running one of Littlefinger’s brothels. Bronn could be his hard-charging manager à la Carla, Grey Worm the bouncer with a Norm-esque drinking problem, and Davos the know-it-all smuggler (re: a glorified mailman). And Jon? He could, um, move to Dorne (re: Seattle) to bore everyone with his romantic woes.

The series finale of Game of Thrones airs Sunday at 9 p.m. ET on HBO Canada and Crave. It will (likely) be nothing like what’s described above. 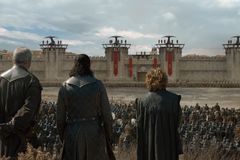 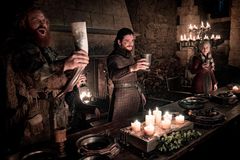 Opinion
Game of Thrones Episode 4 review: An air of defeat lingers over Westeros – and in the writers’ room
May 7, 2019 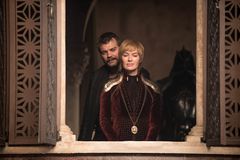