How did I get through it? I rewatched Letterkenny. All of it.

That’s the thing about Letterkenny (new season arrives on Crave, Friday, Dec. 25). You can watch it several times and still find it hilarious, startling and joyously rude. Thank heavens there is now a holiday tradition here of delivering a new season of the series on Christmas Day.

The show, with eight seasons already and several special episodes, is one of the great triumphs, not just of Canadian TV, but of the general culture. Unique, it’s a rogue series that now stands as a masterpiece. Some TV series get awards and others get critical acclaim.

What’s notable about Letterkenny is that it now inspires essays of in-depth study and analysis. As a for-instance, this past July, The New York Review of Books had a piece by Cintra Wilson, “The Brutally Funny, Radically Moral World of Letterkenny.” Yes, an American culture critic (it streams on Hulu in the U.S.) writing at length about the originality and stylistic distinction of this indefinable Canadian show.

Look around the internet and you can also find analyses of politeness in Letterkenny, masculinity on the show and its representation of Indigenous people.

Why is this? Well, pitter-patter, let’s get at ‘er. And it’s no easy task. All those analyses never quite capture it. Letterkenny is Canadian but marches to a different drum beat. Can it be deconstructed and have its engine and parts explained fully? That’s a hard no.

Part of the issue is its setting. It’s rural Ontario and then again, it isn’t; it’s set wherever the grass grows. You see, it’s true that most successful comedies create their own world in which characters and their traits exist on their own merits, and there is an internal logic to everything.

But as Cintra Wilson points out, “Letterkenny is a decidedly Arcadian place.” That is, a rural idyll, a fantasy realm, or an alternate dimension. Since Arcadia has its origins in Greek mythology and was refined in Renaissance literature, this suggests a deliberate literary quality to Letterkenny. And yes, its main strength is its writing, that headlong, furiously inventive, bawdy and ferociously punning, insulting and profane dialogue invented by creator Jared Keeso and developed by him and Jacob Tierney.

There has never been anything quite like the speedy vernacular of Letterkenny, and what is also unique is that it is simultaneously Canadian in theme and not Canadian at all. The bones of the series exist at the intersection of class, race, gender and sexual politics, which is a universal place. It just happens to be a better, Arcadian place and comes out of a Canadian sensibility.

My personal favourite episode is “Bock et Biche,” which ended season five. Written by Jonathan Torrens, of all people, it’s mainly about talking, drinking and fighting, and love. Indescribable if you’re unfamiliar with this world, let’s just say The Hicks, joined by McMurray, Tyson, Joint Boy, Jonesy and Reilly, are asked to help “Les Hiques” at a “bock et biche” because some “degens” from Laval are going to cause trouble.

There is a spirited conversation about craft beer, a memorable and long series of jokes about “TD Bank” and Wayne (Keeso) sees this woman he falls for. The apparent chaos ends in a gloriously beautiful scene set to Un Musicien Parmi Tant d’autres by the Quebec band Harmonium. The complexity of it is stunning, as the Ontario and Quebec worlds on the series are wonderfully mirrored, and the choreography of the final scene is breathtaking.

I’ve seen “Bock et Biche” about five times and I still struggle to explain its magic. I’d have to write a confessional novel to do it justice. But here’s a try – it’s about the power of language, it evokes Romeo & Juliet and, well, it’s as equally razor-sharp in its wit as it is sentimental

Frankly, I have no idea what happens in the coming season nine, and I don’t care. I just want to be back in that Letterkenny universe with Wayne, Daryl (Nathan Dales) and “Squirrely” Dan (K. Trevor Wilson), Katy (Michelle Mylett) and the whole crew. With any luck, Bonnie McMurray (Kamilla Kowal) will turn up quickly. Maybe after another batch of episodes, I can explain it. But, maybe not. It’s critic-proof you see. Figure it out. 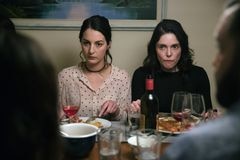 From Kevin O’Leary to Letterkenny’s K. Trevor Wilson, these Canadian celebrities will wish you a happy birthday on Cameo, for a fee
Subscriber content
November 2, 2020 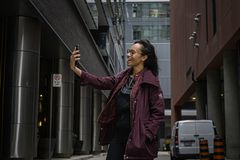 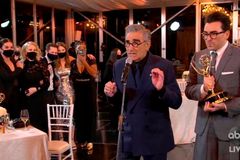