J. Kelly Nestruck
Published May 4, 2021 Updated May 5, 2021
For Subscribers
Comments
Text Size
Please log in to listen to this story. Also available in French and Mandarin. Log In Create Free Account

An investigative podcast … about a theatre company?

That’s what playwright Andrew Kushnir was hired to make last year by the Arts Club, a Vancouver institution that bills itself as the largest urban not-for-profit theatre company in Canada.

You know, something like the true-crime hit Serial, Arts Club artistic director Ashlie Corcoran told him – and we hear her tell him in the first episode.

This is Something Else is the name of the podcast in question – and it drops the final of its five episodes on Wednesday on Spotify, Apple Podcasts and the Arts Club’s own website.

While Serial may have been an inspiration (along with, more obviously, This American Life), Kushnir doesn’t find a murder in the Arts Club’s history – though the exact circumstances surrounding the death of founding artistic director Yvonne Firkins in 1966 are a bit of a mystery. (In one account presented here, she died of a heart attack, atop a ladder, changing a light bulb in the original Arts Club theatre on Seymour Street that she opened in 1964.)

What This is Something Else does investigate is life and death in the theatre world – of artists taken by AIDS or old age, of plays that come and go and then are heard no more, and of institutions such as the Vancouver Playhouse, which shut down in 2012 and left the Arts Club the city’s de facto “regional” theatre.

Kushnir circles around the history of the Arts Club as much as he dives into it, seeking to show things from the inside and out.

As it happens, this is the perfect time for a deep dive into a major Canadian theatrical institution. There are two different narratives about them in this country right now, running in parallel to each other but rarely connecting.

On the one hand, there is widespread anxiety about these big theatres’ survival – whether they will make it through the pandemic, whether audiences will return even when they are allowed to reopen their doors, whether their business models are shattered.

On the other hand, there is a push to expose the long-standing problems that have existed in theatrical institutions: exclusionary programming and practices, exploitative and unhealthy work environments, a growth-oriented mindset that can leave artistic vision behind.

What Kushnir’s podcast clarified for me is that what is being talked about now is simply an amped up version of the duelling conversations that have always gone on around institutions – and which he frames as the inside versus the outside views.

In the 1990s, for instance, artists such as Marcus Youssef (who would go on to win the Siminovitch Prize) viewed the Arts Club as opaque and impenetrable, while then-managing and artistic director Bill Millerd had his head in the financial challenges resulting from a perhaps overly hasty expansion of the theatre as well as an attempted coup by a general manager. (A juicy scoop by Kushnir!)

One thing that’s happening now in the pandemic is that the inside and outside have the time and space to have these conversations more loudly – and perhaps hear one another more than they have before. “Does more transparency between the inside and outside help?” Kushnir asks. As a journalist, I, of course, think it does – and this podcast about the Arts Club’s history (and present) is a hopeful sign for a future of dialogue, “warts and all.”

Some unfortunate news from another Vancouver theatrical institution on Tuesday: Bard on the Beach will not have a 2021 season. “With regret, we have made the decision not to proceed with an in-person Festival in Vanier Park/Senakw this summer, because of the impact of the pandemic’s third wave on our unique production and presentation model,” the company said in a statement.

The 2020 Governor General’s Literary Award nominations were announced Tuesday morning, delivering good news (and a $1,000 cheque) to playwrights after a year of stages being shuttered.

You can read about English-language nominees here – but I always like to pay attention to the French-language nominees for drama as well. This year they are: Aalaapi: faire silence pour entendre quelque chose de beau by the Aalaapi Collective, AmericanDream.ca by Claude Guilman, Coeur minéral by Martin Bellemare, Sucré Seize [Huit filles] by Suzie Bastien and Zoé by Olivier Choinière – which has already been translated into English and was slated for production at Tarragon Theatre before the pandemic intervened.

In the English translation category, meanwhile, there’s one more drama nod – for Amaryllis & Little Witch, Alexis Diamond’s translation of the plays Vipérine and Petite sorcière by Pascal Brullemans. Congratulations to all the nominees.

To celebrate 2020′s nominated plays, why not tune into the “cinematic adaptation” of a play that was nominated in 2019: One-Hour Photo. Tetsuro Shigematsu’s play tells the story of Mas Yamamoto, a man who was confined at a Japanese Canadian internment camp during the Second World War and then went on to help build the Distant Early Warning Line in the Canadian Arctic during the Cold War.

Vancouver Asian Canadian Theatre’s filmed production is on a North American virtual tour right now. It’s “at” Prairie Theatre Exchange in Winnipeg from tomorrow to Sunday, then Artistic Fraud in St John’s (May 13 to 15), the Cultch in Vancouver (May 28 to 30), then the East West Players in Los Angeles (June 12-20).

I’m loving how the pandemic is connecting theatre companies inside Canada with theatre companies elsewhere in the world. Another example: I mentioned Impel Theatre’s digital production of An Acorn, written by Caridad Svich and directed by Kendra Jones, in this space back in March.

Now, it’s getting another run presented by Impel in collaboration with the U.K.’s Oldham Coliseum Theatre featuring two actors from Greater Manchester (Mina Anwar and Darren Jeffries) and two Canadian actors (Blythe Haynes and Ryan G Hinds). The live remote digital performance is on May 6 – and then on-demand tickets are available from May 7 to 17.

Another show to watch online this week: The Boy in the Moon, Emil Sher’s moving adaptation of Globe and Mail journalist Ian Brown‘s memoir of the same name about raising his son, Walker, is getting a new production this week, livestreamed from the Cultch in Vancouver, watchable anywhere.

Chelsea Haberlin is the director – and the cast includes Marcus Youssef as Brown and Meghan Gardiner as his wife, Johanna Schneller. It runs May 6 to 9. I look forward to tuning in. 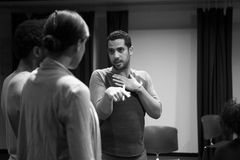 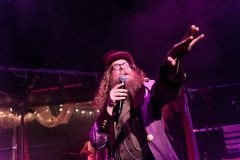