Shifting brand loyalty and increasing popularity for better-quality cannabis products are hampering the growth prospects of some of the largest cannabis companies in Canada – despite an overall boost in sales of legal recreational cannabis throughout the pandemic.

Aphria, based in Leamington, Ont., still held on to its position as market leader, with a 15-per-cent share of the overall cannabis market in the first quarter of 2021. But that slice of the pie had shrunk from 17 per cent the previous quarter, according to data from company filings, the investment company ATB Capital Markets and cannabis-analytics company Hifyre.

Aphria’s coming merger with Tilray Inc. is expected to significantly increase market share to roughly 19 per cent. However, analysts and industry observers argue that the combination of consumers not being able to shop in stores, because of ongoing lockdowns, and Health Canada’s strict rules on branding has eroded customer loyalty. This has led to fluctuations in market share among the most popular cannabis brands.

“What we saw during the pandemic was the emergence of value segments – cheaper cannabis products in the form of dried flower and pre-rolls. The problem with these segments is they tend to be much less brand loyal,” said Rahul Sarugaser, an analyst with Raymond James.

The result, according to Mr. Sarugaser, is certain companies that seemingly were driving revenue and picking up market share for a few consecutive quarters last year have now been superseded by others. “It makes it harder to predict the revenue durability of companies in the sector,” he added.

“We maintain our view of an uncertain outlook for Canadian licensed producers, impacted by near-term headwinds due to product oversupply and a fiercely competitive environment in a still very fragmented market,” Tamy Chen, an analyst with Bank of Montreal, wrote in a recent report.

She went on to describe the Canadian cannabis industry as one with “high volatility,” where “market share can vary substantially from quarter to quarter, or even month to month.”

Aphria, according to one analyst, is losing share because of the performance of competitors producing an almost identical product – generic dried flower. Maintaining one’s lead in a sector that is still grappling with an oversupply problem and shifting customer preferences amid a lockdown will be tough, the analyst said. The Globe and Mail is not identifying the analyst because they were not authorized to speak publicly on the matter.

Indeed, data from three major sources – company financial reports, Hifyre and another analytics company, Headset Inc. – backs up that narrative. In the dried-flower category, Canopy Growth Corp. and HEXO Corp. have increasingly been building market share over the past two quarters, at the expense of Aphria, Aurora Cannabis Inc., and Village Farms International Inc.

Mr. Sarugaser also believes that the pandemic has affected companies that have had a focus on products such as edibles and vape pens. “This is what has happened to Organigram, because of their disproportionate focus on weed-infused chocolates and vape pens,” he said. “These types of products are high touch – customers need to be able to see and feel them in order to make a purchase.”

The data also show another emerging trend, which could be a cause for concern for companies whose primary product is generic dried cannabis: Consumers are increasingly choosing to purchase premium products, cannabis that is more aromatic, flavourful and often stronger in THC content.

Decibel Cannabis, for example, a Calgary-based producer growing premium cannabis, has recently emerged as one of the top sellers countrywide, occupying the third spot in the vape-pen category, according to data from Hifyre. The same data also show that between September, 2020, and February, 2021, sales of 7Acres products – a premium cannabis brand owned by the Supreme Cannabis Co. – grew by roughly 10 per cent.

“Everyone is realizing the value bud era of growth is done,” said Chris Damas, a long-time cannabis analyst and author of The BCMI Cannabis Report. “There’s always been a connoisseur market. These consumers, with their social-media activity, are now affecting the wider population … and the fact is that this group doesn’t like factory weed made by some of the big players,” he told The Globe.

Canopy Growth, in particular, seems to have caught on to this trend. Over the past month, the company has made two significant acquisitions in the premium space – first by purchasing Toronto-based Ace Valley for an undisclosed amount, and then pouring $435-million into nabbing Supreme, mainly for its 7Acres brand.

In a recent earnings call, Aphria chief executive officer Irwin Simon was asked what the company was doing to establish leadership in the premium cannabis category. Aphria’s premium brand is Broken Coast, but conversations with analysts indicate that the brand is not selling as well as it used to.

Mr. Simon says the lockdown is part of the issue. “I think once things get back to normal, we will see innovation out there in regards to different potencies of products.”

He is not the only cannabis executive that has expressed concern about the impact of the pandemic on future earnings. Recently, Canopy’s chief financial officer Mike Lee told investors at a virtual presentation that pandemic-driven headwinds in Canada were likely to have an impact on Canopy’s near-term performance.

Andrew Carter, an analyst with Stifel Financial Corp. who has a sell rating on Canopy’s stock, projects that the company’s future revenue will be “well below” his estimate. Mr. Carter was also unconvinced that Canopy’s recent acquisition of Supreme would lend the company any material benefit, arguing that its market-share stability has simply been attained through the focus on discount products. 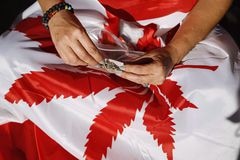 Opinion
Cannabis has been legal for almost three years. So why don’t we want to get high off Ottawa’s supply?
April 20, 2021 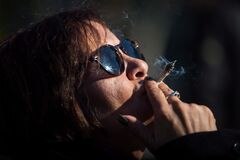 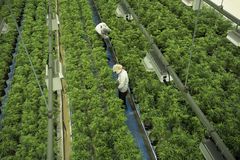