Last September, the chef Justin Cournoyer committed the rough equivalent of restaurant suicide. Actinolite, a polished 30-seat spot that he had opened in 2012 with his wife, Claudia Bianchi, was doing well enough. The room, tucked onto a residential stretch near the north end of Ossington Avenue, was warmly lit and comfortable and good for conversation. Mr. Cournoyer's cooking – sort of Italian, sort of French, initially – drew kind reviews and an older, moneyed clientele that flocked here from all around town.

As the chef now admits, once his restaurant was up and running its concept didn't excite him; the food was tasty but dated and unoriginal. Mr. Cournoyer had spent four years of his career at Susur through the restaurant's prime; he knew what it was to cook inventive, delicious food. But in the years since he'd been "in a bubble," as he puts it, painstakingly renovating the building that would become Actinolite (it took more than five years; he and Ms. Bianchi live upstairs with their four-year-old son, Toby) while working as a consultant and culinary producer for television. "I felt so far behind," he said.

His sous chefs had travelled, though, and they brought new ideas into the kitchen. Mr. Cournoyer began paying closer attention to what was happening in great restaurants around the world. He travelled, too; a brief trip to Copenhagen helped open his eyes to the possibilities in local, unheralded foods. The chef, who is 36, grew up hunting game birds and deer, fishing for pike and foraging wild edibles on Eastern Ontario's Skootamatta River – Actinolite is named after his tiny home town (it became a part of Tweed municipality in 1998). Shouldn't he be serving what he's passionate about?

The change began gradually, as he traded his trips to Toronto's food terminal for thrice-weekly foraging expeditions, for meat and produce pick-ups at small, uncompromising farms around the city's borders, for weekly deliveries from Société-Orignal, the singular Montreal-based supplier of proto-Canadian rare foods.

But last September, Mr. Cournoyer threw out the remnants of Actinolite's old menu to focus solely on "cooking the Canadian landscape," as he puts it. And Mr. Cournoyer would need to change Actinolite's service style, also – it was the only way to make the restaurant he envisioned work. The chef began offering just two options: a four or seven course tasting menu. He quickly lost much of his core clientele. "It was like taking a restaurant and turning it upside down and shaking it," he said.

Yet far from being the death of the restaurant, Mr. Cournoyer's gamble has transformed Actinolite from an elegant has-been into one of the most essential places to eat in Ontario, if not in Canada. His cooking builds odd, exquisite, deceptively simple-looking montages from Quebec pike and grilled wild knotweed, from Arctic flowers and Ontario pork, from salty, assertively maritime Gaspé lumpfish roe and soft strips of local rutabaga, and freshly set cheese the texture of clotted cream.

The food is odd, inspiring, beautifully executed, even magical in places. It's Canadian cooking as I've never tasted it. The only thing missing is the mobs of food geeks; until now, news of Actinolite's transformation hasn't gotten out.

One night early this spring Mr. Cournoyer dressed a small, painterly dish of glazed red local beets with wild fennel and radicchio leaves that he'd cooked with honey and then baked until they were translucent red-orange, more stained glass than cold-hardy green. They were gently bitter, true to radicchio's character but also crisp and sweet and buttery, eerily similar in flavour and texture to a great croissant.

There was a shard of meringue on the plate, white and innocuous looking. My dinner mate and I bit into ours simultaneously. The flavour was distinct, herbal, ruddy green like dried leaves, sweet and marshmallowy like meringue but also the slightest bit musty. The chip had been flavoured with lichen that Mr. Cournoyer foraged in his hometown. My friend's eyes popped wide open. "It tastes like the north!" he said.

Another dish combined a hunk of juicy, slow-cooked halibut with whisp-thin slices of smoked pork jowl, with rich, melty, softly fatty strips of pig's ear. To set it all off, there were little pools of vinegar that thrummed with the resiny, deep woods scent of pine boughs.

The chef brought the next course out personally; the cooks do a lot of the serving here. With enormous respect to Mr. Cournoyer, he still has a bit of the small-town Eastern Ontario boy about him. An undershirt was showing at the collar of his chef's whites, and his hair was short on top but a little longer in the back, the way hockey stars and Cancon rock legends wore it in 1987. He's not a conformist. I suspect that's part of what makes him such an excellent cook.

But more than that, he just seemed boyish: excited to be talking about his food. He'd been foraging a few days earlier. As spring has greened southern Ontario in the past few weeks, the restaurant's ingredients list has begun to lean heavily on foraged produce: wild sweet pea, yarrow, ramps, young bullrushes, watercress, garlic mustard and pheasant's back mushrooms.

He set down two plates, each one draped with a sheaf of leafy greens that had been quickly wilted with butter. The chef had driven out to Hastings, Ont., that morning to pick up the greens, he said: collards, mustard, tatsoi and three types of kale. They had overwintered in a greenhouse, their flavours deepening and turning sweeter with the cold. Three small lamb's sweetbreads had been set to their side on each plate in a tidy golden mound.

The smell rising off those dishes was extraordinary: nutty-sweet brown butter and bitter, peppery greens and the golden, softly gamey, almost milky scent of pan-seared sweetbreads. There was a woodsy, soft-fruit smell, also: juniper from his home town, Mr. Cournoyer said.

I've never had better greens or more incredible sweetbreads. I can count on my fingers the dishes I've had in my life that were as humble and as delicious as this. (It goes off the menu this week; the greens are done.)

Some of what's served here is just so weird that I hesitate to describe it. The first course I ate one freezing night in early February made a mariners' poem of raw B.C. oysters, kelp-flavoured salt and a sauce derived from braised lettuce and fermented currants. It was fresh, crisp and exhilarating (and yes, spectacularly tasty), three little bites to distill an entire range of seashore smells and tastes.

Mr. Cournoyer was right. If you could eat Canada's landscape it would taste a lot like this.

Actinolite's evolution is not yet complete. In the last month I've struggled with what to call the place, and with how to tease apart the restaurant's inspiration from what it actually is. Is it Canadian cooking? Though the ingredients here are local and seasonal and mostly Canadian the restaurant's kitchen has borrowed much of its grammar, the architecture that underlies the cooking, from Northern Europe's New Nordic movement.

They use heavy, speckle-glazed dishes here – the sort of pottery that might have been hand-thrown in a studio lit only with whale oil lamps, somewhere on the North Sea coast. That extraordinary wilted greens and lambs' sweetbreads dish isn't entirely dissimilar to a signature dish at Faviken, in Sweden. This week, the chef put a riff on a famous dish from Copenhagen's Noma restaurant, young carrots and radishes in edible "soil," on his menu. (It's catching: just last week I gave Langdon Hall's chef grief for doing that same dish.)

But then Actinolite's local antecedents – the restaurants that helped to pioneer what we think of as Canadian cooking – weren't created whole-cloth. Michael Stadtlander's Eigensinn Farm is heavily informed by German and Japanese culinary traditions; Canoe by French-Canadian and Western European ones. Actinolite is at least as Canadian as those.

I have quibbles with some of the cooking: a garlic mustard garnish that overpowered three of the most perfect sea urchins I've ever tasted; the odd too-tiny portion.

Mr. Cournoyer likes his desserts savoury: one of them paired a carrot sorbet with a whole, young carrot that had been dehydrated to the texture of fruit leather – it tasted like a hippie licorice whip. What the world does not need now: another root vegetable-based dessert.

The wines are beautifully chosen, brilliantly esoteric, mostly affordable. For a place that's trying to build a Canadian cuisine, however, there are surprisingly few Canadian ones.

In the end, I'm not sure how much these faults matter. The plates Mr. Cournoyer's kitchen is composing right now are new not only to him but also to his kitchen, as are many of the ingredients. The dishes change almost weekly – Actinolite's mission is the cooking of right here, exactly now. They're making it up as they go.

And the price of admission is $55 for four courses; $85 for seven. They're giving it away.

I'm not sure how much more strongly I can say this: you ought to get there, now.

Review
Technique, verve and hard work: Why Langdon Hall (and its new chef) is still great
May 16, 2014 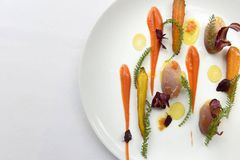 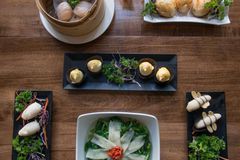 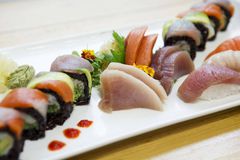