This article from our archives was published in November 2014.

Greg, at the bar, is complaining about Toronto. You need to make at least a million a year to be comfortable in the city, he announces. Greg is in his upper 40s, by the look of it. He says he's in finance. He's brought the new girl from the office with him, a kind young thing named Julie who only recently moved to Toronto, who is maybe half his age. Julie's drunk, but she isn't stupid. Julie keeps rolling her eyes.

Greg has an ex and a kid, he says, but he "got off" paying just $200,000 in yearly support. And anyway, Greg adds, à propos of lord knows what, Greg makes $10-million annually. He's the sort of patron you'd pay that much to never have to sit beside. At America, the tacky, new-money restaurant on the 31st floor of the Trump International Hotel and Tower Toronto, a guy like Greg no doubt feels right at home.

The female bar staff here wear the shortest uniforms I've ever seen in a restaurant, anywhere. (The male staff wear regular clothing.) One of them stops every few minutes to yank her skirt bottom down, so it more completely covers her. It's not sexy. It's degrading. Her face is blank and white.

America's management calls its bottle-service staff "our team of stunning 'America girls.'" Young, leering men and old leering suits pour into America in the evenings. If you build it, creeps will come.

There are bouncers, naturally: bored, wide faces chewing gum aggressively. The bathroom attendant in the men's room has an old face. He doesn't seem to speak a lot of English. He crinkles a handful of foil gum packets and palms a cologne bottle. He is competent, at least – he turns the taps on and off like a champion. I give him a five for my guilt, for his empty servitude. He is far more competent than many of the wait staff out in the dining room. There is servitude everywhere at America, but good service is remarkably hard to find.

America opened this summer, a replacement for Stock, a restaurant so unimaginative that its logo was an S with a fork through it, like a dollar sign. The only time I ate dinner at Stock, the crab legs came out frozen in their middles. The Trump people called in Charles Khabouth of Ink Entertainment (Patria, Byblos, La Société), as well as the Oliver & Bonacini group (Canoe, to name just one), to remake the place.

Their remake aims to be both a fine-dining restaurant and a resto-lounge, which is a fancy way of saying that it's expensive and it turns into a nightclub some evenings, complete with the DJ and the velvet rope. As for the name, it's meant to signify "confidence" and "boldness," just like America – get it? Being there, one preopening press release promised, would be "Like eating your way across Route 66 by way of private jet."

One evening, a Wednesday last month, we had ordered the $58 lobster Rockefeller and a $37 plate of milk-fed pork, as well as a bunch of appetizers. The appetizers arrived and we started in on them. And then roughly four minutes later the mains arrived, too. One of the servers kept referring to the lobster as "Henry" – as in, "How is Henry?" and, "Are you finished working on Henry?" I guess he thought it was funny. Henry became work as soon as that server gave it a name.

My tablemate ordered a bottle of wine, a $160 Savennières, but the server had never heard of it, and so my tablemate had to search the wine list to find it and to physically point it out. They kept the bottle at a waiter's station, so we couldn't refill our own wine glasses. Our glasses sat empty while we worked on Henry and the pork; I had to flag somebody down and explain to him what wine we were drinking to get a top-up. None of this should ever happen in a restaurant, let alone a restaurant where the average entrée price is $45.

The second time I ate at America, I tried to check in at the hostess stand when I arrived. The two women working there were having a conversation between themselves, not two feet in front of me. They didn't look up. It was as if I didn't exist. This continued for most of a minute. Awkward.

I told them the reservation name; they said the rest of my party hadn't arrived yet. They showed me to the table.

I waited 20, then 30 minutes. My friends didn't show. I couldn't reach them. I apologized to my server and said, "I don't know where my friends are." Finally I ordered dinner for myself. Forty minutes after I'd arrived, my friends found me. They'd got to the restaurant before I had, and checked themselves in. The hostesses had told them they'd send me over when I arrived. They had been there all along, waiting at the bar. It was as if nobody had ever worked in a real restaurant before.

"Experience America, the grand indulgence – with commanding views of Toronto's glittering skyline after dark, its lavish service, exquisite cocktails and decadent food," says another bit of the restaurant's publicity material. At least the "decadent food" part is true.

The food, overseen by the Oliver & Bonacini company's Anthony Walsh and executed by the up-and-coming chef Bill Osborne, is the most incongruous thing about America. It's inventive and smart, populist and beautiful to look at.

A dish as simple as a hams and pickles plate here is complex and beautifully turned out, stacked with good house sourdough, sweet, excellent corn bread, ox eye daisy capers, pickled milkweed pods and cattail hearts – all of them delicious – and terrific ham. The "foie gras flapjacks," too, are so much better than that may sound. They're big, tender buckwheat crepes soused with birch syrup and preserved peaches, peanut crumble and a thick slice of seared, fat-candied lobe.

The lobster Rockefeller – Henry – was worth its price and then some. One of the garnishes on the excellent plate of milk-fed pork was a buttery Granny Smith apple purée that tasted like tarte tatin, but was formed into trompe l'oeil apple slices, complete with the (fake) green peel and all. The $56 lamb rack was superb; the roasted scallop jambalaya a rare fail – oversalted. The desserts – fun and tasty. Mr. Osborne will go far. He'll go far, far away from America, I hope.

The two women I was with that night rescued Julie from the bar and brought her to our table. Greg had left, she said; she'd told him to go to hell. She was slurring her words, enthusing about Stanley Kubrick, trying to explain the plot to Barry Lyndon.

Julie loved the desserts. They were the first real food she'd eaten that evening. We paid the bill and packed her into the elevator and put her in a taxi. She didn't belong in America. And neither do you. 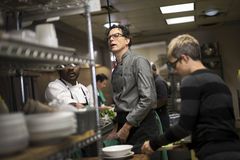 Review
Looking for old-school, live-fire grilling? Why you should eat at Branca
November 14, 2014 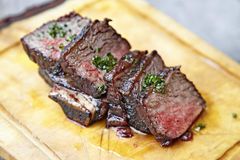 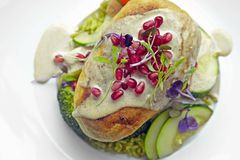