There is no hiding in traditional Spanish cooking. Take pan con tomate, the lusty Catalonian snack that is nothing more than fire-toasted bread smeared with the pulp of a tomato at the peak of its flavour, then lashed with sea salt and good oil. As with so much of Spanish cuisine, it's built on a handful of perfect and deceptively simple ingredients. Pan con tomate rarely tastes the same away from the Iberian Peninsula, much less in Toronto, you'd think, at the peak of an early-winter freeze.

And yet here it is, the sourdough gently charred and smoky, the oil emerald and fresh, reverberating with the taste of fruit and pepper and sunshine, the tomato as ripe and red as in the waning days of a record-hot summer – the whole of it as improbably decadent as any pan con tomate I've eaten in Catalonia.

That little dish was the first thing I tried at Patria, a meticulously researched Spanish restaurant that opened two months ago on King Street West, but it was not at all a one-off. Though the restaurant's owners, Hanif Harji (Nyood, Kultura) and Charles Khabouth (La Société, Ultra Supper Club), have earned their reputations more for the stylish, no-expense-spared, see-and-be-seen environments they create than the food they serve, at Patria they have aimed above all to get the cooking and service exactly right.

Mr. Harji and Stuart Cameron, who is Patria's executive chef (he is also the chef at Weslodge, the Harji-Khabouth co-production next door) spent 16 months sourcing hard-to-find equipment and ingredients, testing recipes and travelling around Spain on research trips, Mr. Harji said. The wine list has more great Spanish bottlings than any place I've seen in Canada save Cava, Chris McDonald's stellar midtown Spanish place; the restaurant has so far spent $120,000 importing wine by the container-load from Spain.

Mr. Harji also brought over two servers and a cook and hired much more Spanish staff from around town. (You will know them by the women swooning all around them.) The local employees, meanwhile, video-conferenced over Skype with one of Mr. Harji's friends in Barcelona, who Enrique Higgins'ed their pronunciation to exactamente right.

The partners even built a proper tapas bar at the centre of their enormous, gorgeous, two-storey room, where a white-coated cook shaves one-ounce $30 portions from a jamón ibérico de bellota, the deep red, nut-buttery, acorn-fed and perilously habit-forming ham from southwestern Spain.

The result is a superb new restaurant, built on the foundations of a refreshingly uncompromising approach to food.

Mr. Cameron's menu is divided into daily specials, tapas, cheeses, sharing plates called "raciones," meats and rice dishes, most of them rigorously traditional. The croquetas, crispy-creamy, made from béchamel and thick as cigars, are excellent, the Serrano ham ones voluptuously porky and spiked with red peppers, the lobster version napped with caviar and crème fraîche.

The octopus is tender-firm and smoky over creamy fingerling potato rounds and torrents of paprika and top-flight olive oil.

The seasoning here, whether the paprika in a tomato sauce, or the garlic in the aioli, or the sweet honey and walnuts to set off a disc of fried goat cheese, is fresh, bold, bang-on – the flavours make you sit up and take notice. The cooks here taste, constantly. Their good judgment turns up on the plates.

The patatas bravas are cubed, fried to golden, set over paprika-spiked tomato sauce and topped with a sizzling, oozy-yolked fried egg and garlicky aioli. It's the sort of dish that some people dream of rolling around in, naked, while humming Enrique Iglesias tunes. Just so you know.

The paella is served in the traditional way, in a wide, two-handled pan (brought in from Spain, of course), with a thin layer of bomba rice that tastes like super-concentrated seafood and is just perceptibly caramelized and crunchy wherever it touched the pan. The cuttlefish and langoustines on top taste silky and almost creamy: They're perfectly cooked.

Yet parts of the picture could use more polish. Not even five minutes after our paella arrived one night, the server dropped the $65, wood-oven baked rib eye at our table; the meat turned cold before we had a chance to a) order wine to go with it or b) make room on our plates. (The steak was good, though no better than you can easily make with a good piece of beef and a charcoal barbecue at home.) In other cases, servers offered bread to sop up sauces, then forgot it, or unilaterally up-sized our orders to include two dishes of a starter instead of one.

The Spanish junior sommelier, who is lovely, and who clearly loves his job, talks much, much, much too much. When I asked for a sherry recommendation one night I got a five-minute disquisition about something called flor and its role in the solera process. I love wine and wine-making. I just wanted a bloody drink.

And Patria's wine prices are, for the most part, crazy with a capital K. My favourite Verdejo, which costs $15 at Vintages, is $52 at Patria. The average wine markup I calculated was triple the retail price.

Pastry chef Anastasia Muchos's desserts, however, are all priced at $6 (they're worth far more) and they're muy rico, as my one-time Spanish instructor might say. Best bet: the extraordinary coffee ice cream and black olive plate, a nothing-short-of-spectacular sensory trick in an ice-cream-sandwich disguise.

If you're the sort of diner who'd never be caught in a Harji-Khabouth restaurant, get over it. This one is too tasty to skip. 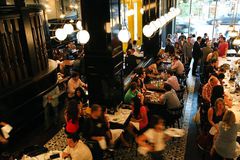 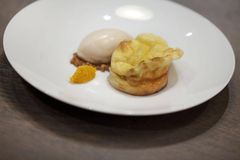