Luckee, the glitzy new downtown dim sum and regional Chinese spot from Susur Lee, is all about its contrasts. The decor gleefully plays high against low, Imperial reds and fine Chinese tea boxes against unfinished cinder-block columns. The cooking is fancier in many cases and far more pricey than your usual downtown Chinese cooking; yet, the red lettering on the floor staff's black tee shirts – "Great! Chinese Food," they read – is done in a kitschy chop suey font.

One of the best servers at the "nouvelle Chinoise" restaurant likes to say buon appetito in his thick Italian accent. I found this jarring at first, and then endearing, 100 per cent Toronto.

Mr. Lee's name is all over the menu and the restaurant's publicity. In one characteristically over-the-top preopening press release, the chef tells of his first memories of eating dim sum with his father. "I hope that Luckee will also create an unforgettable experience for people who love Chinese food," he says. On the nights I ate there, he didn't ever seem to be around.

That last contrast, of hope and promise against cold reality, has largely redefined Mr. Lee's career in the past six years. In the time since he shuttered his reputation-making Susur restaurant, the chef has opened Madeline's, Lee Lounge and Bent in Toronto, Zentan in D.C. and Shang in New York. Mr. Lee has also lent his name to Chinois by Susur Lee in Singapore (the name was recently changed to TungLok Heen), as well as a planned private restaurant on the 66th floor of Manhattan's One World Trade Center. In many cases, he's been little more than an absentee figurehead.

Madeline's was never great and soon foundered, Lee Lounge was way overpriced and underwhelming; it was recently folded into the more successful Lee. Bent is far more a triumph of design (it's great) and branding (it's tiresome; we've all been instructed quite enough that Mr. Lee is "an internationally acclaimed master chef," thanks) than one of cooking. Zentan parted ways with Mr. Lee last year.

At the chef's Singapore outpost, the banquet items include "double-boiled shark's fin in seafood consommé," among other shark's fin delicacies. Maybe the cooking is excellent. But the restaurant's most lasting accomplishment will likely be the work it's doing to dispossess the last of the world's oceanic super-predators of their dorsal fins.

Shang, meantime, opened and closed in the space of three years. This is notable because it's the last restaurant into which Mr. Lee openly and unequivocally poured his heart and soul. The chef blamed New Yorkers' lack of sophistication for Shang's dismal showing. "On Asian cuisine, they are not that advanced," he said in one interview. If you were to judge by the chef's work at Luckee, you might think that neither is Mr. Lee.

The restaurant, set on the ground floor of the Soho Metropolitan Hotel, is a partnership with the hotelier and long-time Susur Lee patron Henry Wu. Mr. Wu once owned Lai Wah Heen, Lai Toh Heen and Senses. He knows great food.

The Peking duck ("Luckee Duck") is worth ordering. It is sold by the half-order for $18, or full for $38, and an extra $10 if you want a side of foie gras. It is meaty and reasonably crisp and flavourful and served with honeydew batons in addition to the usual accompaniments. Is it a Susur Lee dish? Nouvelle Chinoise? Of course not. It is very good but far from transcendent stuff.

The Taiwanese three-cup chicken – the traditional recipe contains a cup each of soy sauce, cooking wine and sesame oil – was delicious. The kitchen had added tangy pearl onions, turnips and dried apricots plumped from cooking. What it hadn't done is what makes great three-cup chicken, which is to bake it in its clay pot, so that the meat and the aromatics and that sweet, dark-hued sauce char and caramelize on the bottom. Here, the clay pots are just for show.

Luckee's Shanghai-style xiao long bao soup dumplings, from the all-day dim sum menu, are one of the few dishes the restaurant excels at. Their broth was rich but light both times I had them, a fine balance between savoury and bright, shot through with ginger, scallion, ground pork and star anise.

I liked the shrimp rice rolls, also, in large part because their glutinous wrappers come stuffed not just with shrimp (low-rent South Asian prawns, by the taste of them), but also with super-light, soft-crunchy chunks of youtiao, a deep-fried, cruller-like dough.

Yet, while I went to Luckee hoping for fine eating, most of it was the other fine: just good enough. This was the work of an "internationally acclaimed master chef" and an all-star kitchen team? I didn't eat much there that you can't get a) cheaper and b) better at other spots around town.

The har gow were about the same as you might find under the sneezeguard at your neighbourhood Mandarin, which is to say they weren't good or bad, just har gow, except that here a basket of har gow costs $7 a go.

Wok-fried dishes consistently bore no sign of having been fried in a wok, such as charring, or crisp textures, or the clouds of aromatic wok hei that are half the joy of wok-fried foods. The green beans were limp and soulless, the fried garlic rice noodles lumpen and unlovely, the "crispy" taro and turnip cake anything but crisp.

(For far better modern Chinese cooking, not to mention best-in-city turnip cakes, get yourself to Chantecler on Queen Street West for the brilliant Sunday lunch.)

The $45 whole lobster in black bean sauce was tough and underflavoured and came with whole wheat steamed buns. One of the best things about steamed buns is their snowy, squishy, refined white flour character. Luckee's whole wheat steam buns tasted like a collaboration between Dempsters and the local clean-living league.

As some consolation, the deep fried foods were well-made. A winner: the General Tso chicken, which, for the record, even the three Chinese friends who were with me that evening couldn't help getting excited about.

The service is a maddeningly uneven mix of chronic overexplainers, hapless know-nothings (the best line of one night, when I asked what the crispy topping on the turnip cakes was: "It's like, a crispy, topping, I think?") and hard-working professionals. Desserts are fine but ordinary.

The last time I ate there, my table mates and I spent a long time staring at the pair of Chinese landscapes that hang on the restaurant's east wall, side by side. The paintings are identical at first blush: a brushstroke for brushstroke lake and mountain scene. But then we noticed the subtle differences between them: the boats had been moved in one of the paintings; the trees weren't in the same spots.

Those paintings, we realized, were most notable not for their beauty, but for their contrasts, for how different they were from they way they first appeared. 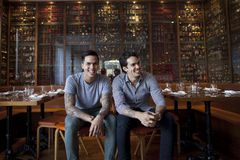 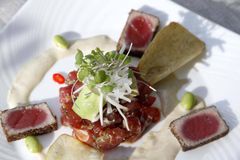 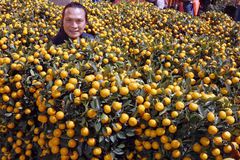