When Susan Ridgway, a retired (but still busy) law clerk, was faced with the task of downsizing to a 1,200-square-foot-space, she had help from her daughter, interior designer Cynthia Ferguson. “I wanted an older building that had larger rooms that could be totally gutted and done afresh,” Ridgway says of her new home, a 1980s-built, Toronto condominium. Her vision: a vividly and variously coloured space that showcased specialty items and her many collections, “so there’s old with the new,” she says.

The process began with meaningful conversation and tough choices. “What furniture did I want to bring here? What are my favourite pieces?” she asks. “That’s the first big decision in downsizing.” The space was renovated with these items in mind. “The floor was torn up, the walls torn back and an electric fireplace put in,” Ridgway says. The latter was a priority item, along with luxurious bathrooms. “In four months, I moved in with everything having been done,” she says, crediting Ferguson’s know-how and connections with fabricators and suppliers.

Favourite room: This Toronto kitchen has all the toys a chef could want

In the den, a favourite space for reading, working and displaying her collection of fine china – “I am a direct descendant of the Ridgway family from Stoke-on-Trent in England, who were involved in the pottery business,” she says – colour and custom furnishings reign. Built-in cabinetry, designed by Ferguson, is painted Benjamin Moore’s Jet Blue. A love seat, reupholstered in a similar shade, is nested into a perfectly sized nook and a favourite painting of a rural scene hangs above the seating area, illuminated by swing-arm wall sconces from Robert Abbey with custom lampshades.

A custom-designed chair with pink fabric by Kravet delivers a big pop of colour and is bedecked with throw pillows by Cynthia Ferguson Designs. “I’m not afraid of colour at all,” Ridgway says. And though she’s not a designer herself, she acknowledges it might be a familial trait, passed down. “I’ve always been interested in the design world. I have a brother who’s an architect and a mother who I would refer to as a colourist, who could really put colours together,” she says. “So, I was always around somebody who could create an interesting space with wonderful colours.”

The room was designed for both work and leisure. Ridgway is a competitive bridge player, birder and board member and volunteer at several Toronto hospitals. A desk and file drawers sit under the bookshelves; “Coming from the field I’ve come from, you tend to be highly organized and used to dealing with a great deal of paper,” she says. Ridgway’s other collections are likewise tidily presented here. Colourful pictures by Susannah Bleasby and from D.E. Lake Gallery in Toronto populate the shelves, along with several card game strategy and rule books, “because there’s not one definitive bridge book,” she says. A floor-to-ceiling display cabinet, called a breakfront, for her collection of china was an “important piece to work into the space,” she says, along with a five-shelf antique etagere.

Other exceptional items on display: a collection of Mary Gregory glass with white enamel “paste on” scenes of children playing outdoors and shells and rocks found on the Gulf of Mexico in Florida, the Gulf of St. Lawrence in Newfoundland and in the Bancroft, Ont., area, where another daughter (she has four in total) has a cottage. “The grandkids and I go up and pick over rock piles,” she says. For Ridgway, her love of – and tendency to collect – both natural and crafted objects is a family affair. “I do surround myself with my collections,” she says, “and photographs of my grandkids are sprinkled throughout.”

Favourite room: This Toronto kitchen has all the toys a chef could want
Subscriber content
December 18, 2018 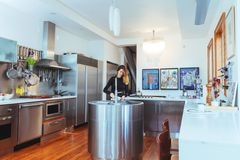 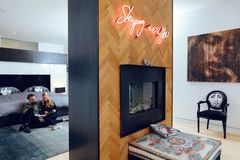 Favourite room: A living room design that is anything but safe
November 29, 2018 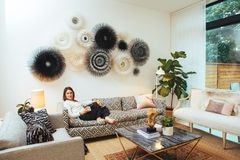