Call her particular, but not precious.

Finally nearing completion, Ginger Sorbara's major overhaul of a High Park home once owned by two bachelor brothers, George and Harry Mills, is a testament to this philosophy: full of fine millwork, well-planned spaces and a classy, glassy addition at the rear, some traces of history remain, but only where it makes sense.

In fact, Ms. Sorbara's particular-ness started even before she purchased 53 Indian Grove in February, 2009. Already a resident of the neighbourhood, she'd started a relationship with the beloved brothers in 2004 with an offer to buy the dilapidated 1911 property that had been in the family for over seven decades – paint peeled everywhere, walls were filthy and water-damaged, tentacles of ivy reached through broken windows – but had struck up a genuine friendship with the men instead.

After she and her architect partner, Douglas Birkenshaw, a principal at B+H Architects, received the keys (Harry died in 2008, George in 2005), and after the couple had watched 11 construction-sized bins of Mills family flotsam and jetsam leave the premises, Ms. Sorbara and a photographer-friend, Greg Pacek, took 'portraits' of the home in its purgatorial state. These wonderful photographs were then shown at two art galleries, where a 74-page booklet, 53 Indian Grove, was also offered for sale (covered here in May, 2011).

"I like that sense of progression in houses – the old thing, then the new thing," says Ms. Sorbara, standing in the dark-panelled music room near the piano, which still has the Mills' gold-and-black flocked wallpaper. "It's very European, where you'd have a stone building and you'd put a glass box [on it]…you feel the history." And you really can "feel" it: stroking the fuzzy wallpaper, a wayward finger can go right into the wall in a few places, since Ms. Sorbara hasn't filled the small holes left by the family. "A part of me thinks of it as patina, and part of me like an art project," she explains, adding she might 'fill' the holes with Mills family photos left in the basement and then cover the 'repair' with lacquer. "I think of this [wallpaper] as passing, and I know that isn't very rigorous of me, but this is the state it's in; I am probably not going to do amazing gymnastics to bring it back to original, but I like that it's here."

She liked other things enough to save them during the almost-two-year renovation, too. Just outside the music room, in the foyer, the original plaster light fixture hangs and, up the wonderful original staircase, one wall of her second floor office resembles geological strata, as new chalkboard paint covers part of the old plaster, which has crumbled away around the edges to expose some amazing old brick.

That's not to say, however, that there aren't amazing new things to admire.

To the left of the foyer is the sparkling new kitchen. While it's lovely due to amazing custom millwork by Ms. Sorbara's uncle's company, Barlow Cabinet Works (built to Ms. Sorbara's and Mr. Birkenshaw's plans), a bench in the bay window, and a long Eramosa limestone island, it's down a few steps to the 400-square-foot, high-ceilinged addition where this renovation really rocks. Here, floor-to-ceiling glass welcomes greenery inside – and there's plenty of that – and a massive, angled fireplace dominates one wall, which is better than the "giant zit" it could have been.

When the fireplace first arrived, explains Ms. Sorbara, it was placed against the wall of the "big and beautiful" new living room, where it stuck out like a sore thumb…or pimple. So, she and Mr. Birkenshaw "drew it and drew it and drew it" until they arrived at a plan: a false wall. "All of the space in here," she says, touching the drywall over the firebox, "is air, and it's really gut-wrenching to give up space, but space is not a huge problem in this house."

As counterpoint to all that space is a tiny powder room near the dining area that's so small, the corner of the wall swings open to reveal it. "Houses should have a little bit of surprise and humour," says Ms. Sorbara.

Notable on the large second floor landing is a library, which also demarcates where the public area ends. From here, one can enter Ms. Sorbara's office or the large, new master bedroom, where "you are in the trees." The "poetic and gestural" movement of the branches makes this "the most beautiful place I've ever slept," she says. Across the library landing, kids rooms fill out the original portion of the second floor.

To make the third floor more usable, the roof pitch was reconfigured for more ceiling height. Now, what was a cramped space has become an open, airy place for Ms. Sorbara and an assistant to work at her design business (she's working for four clients at the moment) and for her two boys to build an army of Plasticine men. Outside, however, it's hard to tell the roof-shape has changed since the reproduction of the original stucco and half-timbering is what draws the eye.

Although landscaping is still a year in the future, Ms. Sorbara's worry about the matter is as nonexistent as the front porch, still in the planning stages. "We're going to be slow," she says, matter-of-factly. In a world where television shows promise renovations in 48 hours, this is a refreshing: while this is a top-down, top quality redesign, there is room for old wallpaper and the original staircase doesn't seem orphaned by surrounding newness. At 53 Indian Grove, things are still practical and workaday rather than precious.

Something the Mills brothers, if they were around today, would certainly understand and appreciate. 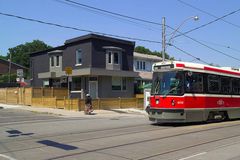 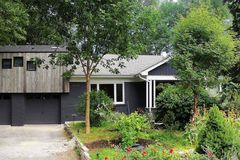 A wounded Frank Lloyd Wright home in Buffalo, N.Y. gets put right
May 1, 2018 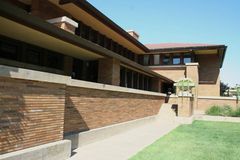