While there are many aspects to agriculture, the root of it (if you'll pardon the pun) is the control over nature to benefit humankind. Indeed, throughout most of human history, the majority of the population worked to tame the land.

When farm machinery came along – and there was no bigger manufacturer than Massey-Harris – it allowed for the creation of a new class free from manual labour: the middle-class.

And because this middle-class toiled in grey, downtown offices, they needed small patches of green in which to sit and contemplate this newfound freedom over brown-bag lunches. Parks, in their own way, are also about the control of nature to benefit humankind.

You see where this is going.

No? Well, while this may be a lousy connect-the-dots history lesson, there's no denying the connection between the former Massey-Harris complex that once stretched along King Street West between Strachan Avenue and Sudbury Street, and the park that filled one small part of that site in 2006.

One of the most thoughtful, pause-worthy and inviting of Toronto's public spaces, Massey Harris Park is the creation of architects James Brown and Kim Storey, the husband-and-wife team responsible for that vibrant and pulsating gathering space that's intentionally un-park-like, Dundas Square, "the picnic blanket," says Mr. Brown, that Torontonians have embraced and created the ongoing picnic for.

And while there is plenty of grass and shade to picnic or brown-bag it at Massey-Harris, it, too, has a few un-park-like qualities. For instance, most park pathway systems are shaped "like a Union Jack," offers Ms. Storey, in that they direct the walker across the space in as straight a line as possible: "As soon as you get in the park, it says 'now get the hell out,'" she jokes.

"… There's no seduction, there's no magic, there's no poetry," Mr. Brown adds. At Massey Harris, however, the paths "go for a walk themselves." It's true: They wiggle, meander and crisscross, and a few even come to a dead end. In a couple of places, two bend dangerously close to one another, which forces interaction between strangers. In essence, they offer choice and, by doing so, force the urban walker to slow down.

"So you could loiter here," Ms. Storey says.

Also, there are short stairways to nowhere. Well, they look like stairs but really, they are yet another way to offer pause to the user. Climb them or, better yet, have a seat: "When you sit there, you're in the site, not just passing through it," Mr. Brown says. The stairs are possible because of subtle elevation changes – low-to-high and high-to-low – that Brown + Storey Architects (with Daedalus Design) have inserted throughout the park using a "striation" pattern. These striations, combined with the meandering paths, are meant to symbolize furrows in a farmer's field. Further, the striations run east-to-west to emphasize the length of the park, since condo buildings loom on both sides. The condo of note, of course, is the former Massey-Harris office building, an 1885 red brick Georgian beauty by E.J. Lennox. Various species of trees have also been planted in an east-west direction.

A wooden boardwalk frames the east and west edges of the park. This, says the duo, makes it clear that the grassy bits are not a "side yard" for the condos. In a few other places, wooden planks are used to create an almost dock-like feel; one is positioned over the park's splash pad, which is triggered by a button on a stanchion (so if there aren't any kiddies around, an adult can enjoy it as a water-feature).

To contrast with the east-west emphasis, a large metal trellis stretches from north to south in the approximate location of Crawford Street, which was still a public road when the architects received the desolate site from the city. This large rectangular area adds "vertical density" to the park while also offering privacy from prying balcony eyes above. The underside of the trellis features a stainless steel sculpture by James McLeod, Evolution Unrolling, which represents rope, chain and DNA. "That's the impression that I wanted to give," he says on the City of Toronto website, "that I was tying all this together and reflecting on …times and cultures that had lived in the area."

The trellis also acts in the same way a doorknob does, Mr. Brown says, in that it tells the user how it should be used. Known as "affordance," it clearly states here that it is an outdoor room that can host farmer's markets, performances or art shows. "You have to construct that; it just doesn't happen by itself."

Massey Harris Park is a small public space that's big on variety. Here, a cluster of trees offers a shady nook, while over there stairways offer a cozy perch; under the trellis, the eye can choose to look up at a bright red streetcar reflection, or the dancing shadows Evolution Unrolling creates on the ground below. Wiggly pathways take walkers from rushed to hushed in only a few steps.

Hard to believe this is B+SA's first park in Toronto … let's hope it's not their last. 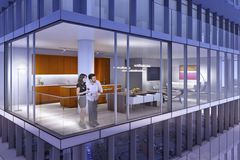 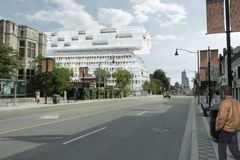 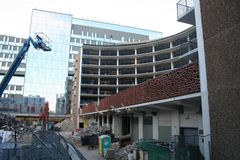