"Their fault!" says Bart, stabbing an index finger at neighbours Lori and Scott when asked why he's endured two kitchen renovations since moving into his Westmount, Que., semi-detached home in 1994. His wife, Susan, laughs as Lori picks up the story (both couples have asked to withhold surnames).

It was in the wide laneway behind the two-and-a-half storey, 1928 Arts and Crafts semi where it all started, she says. For a brief period in the mid-2000s, both sets of children attended the same school, and she and Susan would walk them there via the lane, with their dogs scampering behind: "And I said to Sue, 'Did you ever think about taking the back wall out?' because she'd muttered about her kitchen."

She'd "muttered" because her 10-year-old traditional kitchen was already starting to sag. Plus, there was a staircase hogging valuable floor space, tiny windows, and, adds Bart, "we could not, as a family, eat in this kitchen."

Lori and Scott, who moved into their half in 2002, were no better off: In addition to the staircase, their kitchen – a mirror image of next door – still had the butler's pantry, which ate up even more space. "You couldn't open the fridge and make lunch at the same time," Lori quips.

Clearly, something had to be done.

But living in "half" a house doubles the challenge: Renovate without the blessing of the next door neighbours and risk making enemies, and these couples had been friends before the shared wall. Or, go ahead with a gut reno, then settle back to enjoy it just as a new dumpster arrives over the fence; worse, both owners end up with a mismatched home, and Susan and Lori had catalogued enough of those on their leafy, curving street already.

So, they searched for an architect to share. Since the City of Westmount takes heritage architecture seriously, with levels of protection to navigate and paperwork to sweat over, they hired R. James Aitken, Architecte "because he knew how to work within the system," says Susan. A Westmount veteran – he'd done work on city hall – Mr. Aitken welcomed the bureaucratic wrangling as well as the two-family challenge: "It was a very multidimensional project in terms of the interpersonal relationships," he says, "and they evolved and changed over time and there were differences of opinion."

Differences? It's hard to tell: The 2006 addition is so seamless, so considerate of the home's countenance, it's as if the two families were of one mind. Adding large, period-appropriate windows helped with light, and the new, flat roof is both sympathetic and stylish, while being fully capable of handling Montreal's legendary snow-loads. Rotating the staircase in both kitchens widened floor space considerably; pulling out the wall the maximum distance allowed, 11 feet, gave each couple an informal dining space.

Similarities end with the decor. On the right side is Lori's kitchen, built by a local contractor. Like the landscaping outside, it's traditional and cozy, with creamy stone counter tops and shaker cabinets crowned with moulding. In a nod to sustainability, an exterior window has been retained; it nestles into the counter beside a new interior door to the garage.

Interestingly, Susan, who had a traditional kitchen before, did a stylistic 180. Armed with Mr. Aitken's catalogues and dozens of shelter magazines, she was struck by photographs of older European homes that had grafted modern kitchens onto their backsides. Then, a friend who had practised architecture in Germany pointed to one by Bulthaup, a German company with a then-new showroom in Toronto, and called it "the Mercedes of kitchens."

Once Bart was equally smitten, they began to plan. But the folks at Bulthaup put up an early roadblock: They insisted upon a meeting with Mr. Aitken to make sure he had the chops to deal with the to-the-millimeter tolerances their kitchens required.

"I was being interviewed by the kitchen guys," he chuckles, still a little surprised.

He passed the test. Today, he sits at Susan and Bart's dining table with the others, discussing aesthetic things – "At the time there were no pictures in the magazines about dark grey kitchens … so I was very nervous about that," Susan recalls – and engineered things, such as Bulthaup's "sexy" hinges or how the freestanding cabinet wall in fronting the stair had to be anchored with huge bolts. Bart shows off the tambour door that lifts to reveal a bar (where their window to the garage once was) and his flat screen TV.

Mostly, however, the group discusses the wisdom of combining renovations. The only snag, they say, was when Susan and Bart's slightly larger scope of work, which included widening the garage to add a mudroom, delayed Lori and Scott's job. "I remember there was a point where we just said 'please stop on ours for a week or two,' " says Susan, "but that was pretty minor in the whole scheme of things."

It certainly was, if one uses the dinners, walks, and glasses of wine passed over the fence since then as proof: "We're very fortunate, I feel, to have had this opportunity," finishes Susan. "I said to [Lori] in one of the e-mails 'You know you're not allowed to move, right?'" 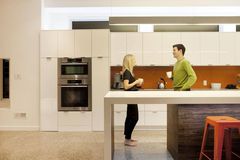 A 1960s swoosh of modernism preserved at a Canadian Tire gas bar
November 8, 2012 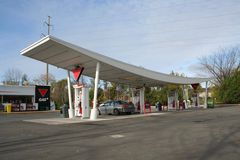 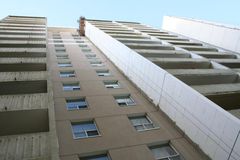