Dave LeBlanc
Hamilton
Special to The Globe and Mail
Published August 18, 2011 Updated May 3, 2018

It's an old-fashioned, steel-card catalogue of about 18 inches in length. Joan Roscoe places it gingerly on her dining table with the words, "These are all the jobs; I've never really looked at it." Jammed inside, a treasure trove: Every building architect Stanley M. Roscoe designed from 1960 until his retirement in the early 1990s.

But don't think of it as a career in a box. Rather, each tiny typewritten card is a window into understanding.

Although it doesn't contain the decade Mr. Roscoe served as Canada's first "City Architect" in Hamilton (1951 – 60). Of note is the incredible variety of his output – office buildings, retirement homes, housing in Trinidad, religious buildings, restaurants, hospitals – and the meticulousness with which he kept records.

But what about the man? For that, one needs larger windows.

Many opened at his August 2010 memorial service. Calling him a "man of passion," one daughter said: "I remember how his career as an architect affected our daily life … Sunday afternoons spent in the car visiting work sites while he took stock of the week ahead and the state of various building sites, while the three of us were in the back seat waiting for the next ice cream cone…"

Another glimpse, in 2008, when controversy erupted over proposed alterations to his beloved Hamilton City Hall. Railing against removal of the exquisite, hand-picked marble cladding in favour of commonplace concrete, heritage architect Catherine Nasmith wrote that Mr. Roscoe "deserves all the honours that we can heap upon him" and that "replacement in concrete would downgrade the public image of the City of Hamilton." Hamilton-born Bruce Kuwabara remembered the "huge impression" Mr. Roscoe had on his own architectural journey: "He was positively dapper, always wearing well-tailored suits and ties. His shirts, unlike mine, were crisp," he wrote. "He spoke precisely and quickly, directing the flow of discussion about detailed aspects of his projects."

Should one get the opportunity to see it, an eight-page "precisely" written autobiography done a decade ago offers even more. Born 1921 in Franklin, Man., to hardworking parents, Mr. Roscoe describes how he attempted to join the R.C.A.F. in 1939 but was rejected due to a bad eye. After a brief stint as a schoolteacher (like his father), he joined the Navy and boarded a corvette, HMCS Algoma, in '42 and, after that, a minesweeper, HMCS Fort Frances. He wanted, and saw, action. Impressed with the "complicated monsters" of bricks and mortar observed during wartime travel, he attended the University of Manitoba's architecture school, graduating in 1949. After graduation, he worked briefly for Hamilton's J.D. Kyles. In 1950, he married. His chief influence, Frank Lloyd Wright, his game, golf, and his grandchildren, cherished.

Even more can be gleaned about this remarkable man if one is lucky enough to accept an invitation to Mr. Roscoe's personal residence, as I did recently. Finding a shady, ravine lot at the top of a dead end Ancaster street purely by "happenstance," Mrs. Roscoe tells of how her husband designed the home in 1955-56 and had it ready for hosting family during the 1956 Christmas season. A long, sheltering shallow-pitch roof covers an economical split-level floor plan and, at one side, the "box" is broken by a wraparound window-wall – the windshield of a 1950s automobile comes to mind – in pure Wrightian fashion.

Sitting on a built-in sofa designed by Mr. Roscoe is a good place to admire the long beams as they pierce through those windows to blur the distinction between indoors and out. From a corner armchair beside the big, bold fireplace, it's a view to the kitchen wall that stops short of the ceiling – so it can double as a shelf for Mr. Roscoe's collection of model ships – that impresses.

In the kitchen itself, with a little imagination, one can see Mr. Roscoe's raked, floating cabinets with their sliding, reeded glass doors as subconscious prototypes for Hamilton City Hall's floating council chamber. When the laundry pair and ample shelves are revealed behind a sliding bamboo door behind the kitchen, one understands the practical side of the architect as well as the creative side.

Such private windows! But when they are shuttered again, where to look?

An invitation to the home isn't necessary: A wonderful photo essay can be found at www.historyandheritage.ca/movies, and the website's creator, Graham Crawford, will fill your ears with tales of Mr. Roscoe should you visit him at his "storefront museum," HIStory + HERitage at 165 James St. North. Or you can purchase a poster of the Roscoe residence at his very vital shop.

And, despite the concrete cladding and how "irate" it rightly made Mrs. Roscoe, one can do no better than a stroll around Mr. Roscoe's Main Street West masterpiece. Behind splashing fountains, that angled council chamber on stilts snuggles into the crook of its much bigger brother's arm; both buildings wear crisp, shimmery suits of curtain wall. Inside, cool terrazzo and stainless steel-trimmed staircases brim with International Style confidence. There is respect for materials, and an artist's manipulation of them.

It is, in a word, breathtaking … and the best window into the soul of Hamilton's most important Modernist architect. 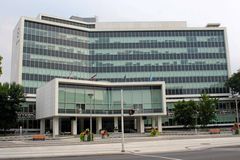