We live in a family-oriented neighbourhood in the heart of our city. Dozens of kids ride bikes, play soccer and so on while adults chat and watch. Last summer, one of my neighbours (with three sons) told me he saw a woman walking her girlfriend on a leash. I told him he must have been fantasizing. Sure enough, a woman (I'd seen her before; she rents a basement apartment on the street) came around the corner walking her girlfriend on a leash. We've seen it many times since then, in the middle of the day. My four-year old daughter asked me why the lady was wearing a leash. I told her that she was pretending to be a dog and that the other lady was playing the owner. My daughter loves inventing her own play scenarios and easily accepted my explanation. This has been going on since last summer, so it's obviously a happy, long-term relationship. But I don't love having to explain S&M role-play to my four-year old and would appreciate if the dog-walking happened after, say 9 p.m. What would you do?

Now I've officially heard it all. God, it's straight out of Samuel Beckett's Waiting for Godot. Next Leash Lady (like Pozzo, to his manservant-on-a-leash Lucky in Godot) will be whipping her girlfriend as she walks along, saying stuff like "Basket!" "Pipe!" and "Dance, hog!"

Here's one idea. Ask Leash Lady if you can "pat" her girlfriend, then tousle the girlfriend's hair, scratch her behind the ears, then reach in your pocket and bring out a "treat," like a piece of Brie on a toothpick, or some coconut shrimp, and give it to her, saying "Attagirl!" and "Good girl!" the whole time.

I kid, of course. The above suggestions are "for entertainment purposes only." When you unpack this dilemma, it's actually kind of a tough (or maybe I should say rrrruff!) one.

On the one hand, I understand the temptation to go up to Leash Lady and say something like: "Hey could you please, like, not do that?"

I mean, I think you've handled your daughter's questions in a very elegant and clever fashion, so far. But as time goes by, she may come to doubt what you've told her – or some older kid will tip her off. And she may resent you for that – and why should you have to go through all that because Miss Knotty Dreads likes to parade her personal kink for all to see?

But here's the thing: You can just bet – you know – Leash Lady is just dying for someone to come up to her. Parading your girlfriend through a residential street on the end of a leash is a classic case of "épater la bourgeoisie" – like when the Surrealist poet Gérard de Nerval used to promenade his pet lobster Thibault through the streets of Paris on the end of a blue ribbon. It's a deliberate act of provocation and nose-thumbing to your "conventional thinking" and "bourgeois, materialistic values."

Basically, I'd worry that if you approach her in any kind of confrontational fashion, what will be unleashed is not her girlfriend but a hostility-laced tirade, aimed at you, on her sexual rights, your right to judge, interfering busybodies, etc. And public discourse is already so full of hostile exchanges, I feel. (Last fall, my wife Pam was riding her bike sans helmet and a woman in an SUV pulled up, rolled down her window and said: "Did you forget your helmet or are you just stupid?" After that encounter I came up with an all-purpose riposte: Simply drolly cock an eyebrow and say "Been a while?")

It sounds like you feel it's a happy, consensual relationship, and there's nothing dangerous going on in that basement. So if I were you I'd just relax, and enjoy/ignore Leash Lady's exhibitionistic display. All part of the fun and pageantry of living in the big city, right? Smile and wave and act like it's normal when she sashays past. It's no fun to épater la bourgeoisie if the bourgeoisie acts all blasé, and maybe she'll get bored of trying after a while.

In fact, why not approach and try to get to know this kinky couple? Find an opportunity to have a pleasant chat with them. Don't even mention the leash. Prediction: She'll want to talk about it (like the dad who transgendered himself into a mom in my neighbourhood: I let him bring it up first. After that the trick was getting him – or, rather, her – to talk about something, anything else).

She may turn out to be a nicer person than you may be imagining. Of course, she may not, but step one is to get to know her. Everything, including whether and what to say or do about her little "hobby," will flow from there.

Meanwhile, if your daughter somehow discovers the truth – well, that's no biggie, either, in the grand scheme. Just take her hand in yours, look into her eyes, and say: "Honey, it takes all kinds to make up this world." Maybe it'll help her grow up to be ultra-tolerant and hard to surprise. 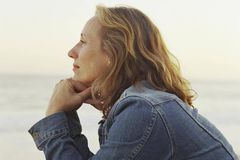 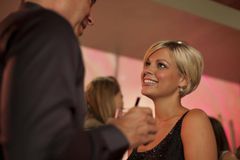