You know you're in Prague when you feel like you've been dropped into the middle of an intricate pop-up book, its pages dense with orange rooftops, cathedral spires, palace towers and cobblestone streets. Even after many visits, my first impression is, "This really exists?" Surrounded by 1,100 years of palpable history, I then think, "I could really write a novel here." Followed by, "but first we should get a beer, I mean, we're in the home of Pilsner after all."

This summer, I travelled to Prague with my dad (who was born there), my brother and my five-year old nephew. Usually we stay with family outside the downtown core, but on this trip we rented a flat in the left-bank district of Mala Strana (Lesser Town), with its storybook streets and steep climb that leads to Prague Castle. We were real tourists. And we were hungry.

Dropping off suitcases, we headed to a corner store where we gathered sustenance – stinky Czech cheeses called olomoucke tvaruzky, a few rohliky (buns) and Staropramen (a local Pilsner made with Prague water). Dense and a little chewy, the olomoucke tvaruzky are a washed-rind cheese with lots of salty pungency. For a real Czech lunch, pile them on bread with a slather of butter and sliced onions. Beer is a must.

Fortified but fighting off jet lag, we walked at dusk toward the Charles Bridge (Karluv Most), which crosses the river Vtlava linking Lesser Town with Stare Mesto (Old Town). We passed softly lit pubs (cozy dark wood rooms, some situated in cellars) and patios advertising "beef knuckles, beef goulash, leg of duck" and the required "hamburgers." Though roaming the bridge at midday, mingling with local artisans and listening to the bridge band playing swing tunes is a must, you should also give yourself some one-on-one time. On Sunday evening it was quiet, the 30 statues of saints silhouetted against the lights of the Prague Castle, boats touring the river.

My cousin, a Prague native, likes to go sit on the bridge in the early morning. Morning bridge visits for me include a stop at a pekarna (bakery) for coffee and a couple of kolacky (open-faced pastries spread with preserves or fruit) – our go-to was Prague chain Michelska Pekarna. After taking in the view, look for the water mill on Kampa Island. You can take a staircase down from the foot of Charles Bridge (on the Lesser Town side) and find yourself wandering toward Kampa Garden, ideal for a picnic lunch or just lounging on the riverside with a view of the golden roof of the neo-renaissance National Theatre. You'll want to check out the disturbingly compelling "giant baby" sculptures by Czech artist Davis Cerny crawling alongside the exterior of the Kampa Modern Art Museum. Kampa Square also has several little shops with great pottery, jewellery and toys where I bought many of my souvenirs.

There is a lot of walking to be done and I highly recommend popping into a little tabak or trafika (where you can also buy metro tickets) to grab a couple of packets of Tatranky or Fedorki. When my grandmother would visit us in Canada, my brother and I would dig through her suitcase looking for these crispy chocolate wafer cookies. When you're on vacation in Prague, consider these energy bars.

And then contemplate lunch. You cannot be in the Czech Republic and not eat chlebicky at least once (or 10 times). These open-faced sandwiches with their rolled salami, lettuce leaves, hard-boiled eggs, potato salad, smoked ham, pickles and even crab salad are a traditional Czech meal and not to be missed. They may be hard to find among the touristy restos, so head to Jan Paukart deli in the Nove Mesto (New Town) district. Open since 1916, the deli lets you choose your chlebicky from a glass display case and then sit down with a beer in the back where they also serve hot lunches.

If you're looking for a more modern take on traditional tavern fare, don't miss Lokal – local ingredients, high-quality food and menus in Czech and English, for the tourists and neighbourhood folks. Pilsner Urquell comes straight from stainless steel tanks (pivo z tanku), bypassing pasteurization (used in bottling), and it is extremely fresh and full flavoured. Save time and order the large (velky) over the small (maly) pivo right away.

The food at Lokal was – dare I say – as good as my grandmother's? We had thinly shaved ham with horseradish whipped cream, perfectly seasoned steak tartar with crunchy garlic rye toast, a schnitzel that was as a schnitzel should be – thin crust, crispy, forming a slight pocket around the meat. Even the svickova – braised beef with a puréed vegetable and cream sauce, which is usually bland at tourist restaurants, was light-tasting with a great sour tang to the sauce. The dumplings were moist and dense, just as they should be.

Happily satiated, we followed Dlouha street all the way to Old Town Square to see the famous Orloj Astronomical Clock strike the hour, my nephew's first viewing of the medieval timepiece. Beyond the beauty of the clock itself, the attraction is the gruesome legend – the clock maker was blinded after creating it so he could never replicate it anywhere else. But even your history teacher would forgive your distraction from the 700-year-old clock by the smell of pork on a spit being roasted and served a few feet away in the square. The booths here are set up with beer, pork and sausages, all to be eaten on thin paper plates, accompanied by a small pool of mustard and thinly sliced rye bread.

The eating of many sausages and the drinking of much beer will compel you to climb stairs: 299 stairs to be exact. One of the best views of the city is from Petrin Observation Tower. Take the funicular railway in Lesser Town to the top of Petrin Hill and wander around the manicured gardens, stopping to ponder life as Franz Kafka once did (see what I mean about the novel?). Then start the journey up the tower and every time you think, "this is it, the best view ever," just tuck your camera away and keep climbing. The burnt orange roofs, the Prague Castle, the Vltava river and its bridges are all lying below you. Beside Petrin Tower is a mirror labyrinth dating back to 1891, which, although I had my doubts, was as fun for adults as for kids (judging by the giggles and time spent in front of the distorting mirrors.)

Post-exercise, take a short tram ride to the 1902 Parisian-style Café Louvre. You can start your day under its elegant high ceilings with breakfast and the newspaper, grab a hot bowl of goulash for lunch or stop in for pastries and coffee in the afternoon.

Then, with a spare pastry tucked into a napkin, get lost. Prague is a city whose back streets and alleyways will lead you to small cafés, hidden gardens and, if you get lucky, an authentic tavern experience, surly service and all. Kick back, order a snack of utopenci (pickled bratwurst) and you may just be mistaken for a local. Just don't get caught ordering a small beer.

We're taking our 10-year-old to Prague. What might interest children in the Czech Republic?
June 10, 2011 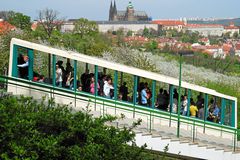 Grandeur and grittiness collide in Prague
May 4, 2010 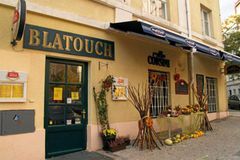