As kitchen gigs go, Ferran Adrià has it pretty good: The star chef of elBulli, the hyper-creative "deconstructivist" restaurant on the Catalonian coast, runs a brigade of 42 top-drawer cooks, fields more than two million reservation requests annually, and shuts the business down for six months every winter to mull over new ideas in his Barcelona laboratory.

And yet, in an emotional speech late last month, the man who brought us "frozen chocolate air" and showed the world how to extrude two-metre-long parmesan spaghetti strands from PVC tubing suggested he was suffering from exhaustion and announced that the restaurant would close for two years - if not forever - to allow him time to regroup.

"It is tremendously stressful working 15 hours a day while still being creative," he told London's Daily Telegraph.

Canada's most creative chefs, whose working conditions aren't so ideal, can relate.

"The first thing on my mind right now, after coming through Christmas, is the burnout," Justin Leboe, the executive chef at Rush in Calgary, said this week. "The fatigue from the creative side of it is the most challenging aspect of the job."

As with most cutting-edge restaurants, however, few of the dishes at Rush last for long. Over the past few weeks, Mr. Leboe has thrown out most of his old menus and begun replacing them with new ideas, all while serving a few hundred diners some nights and working six or seven days a week. "The more you work, the more susceptible you are to losing your creativity," he says.

Marc Lepine, the chef behind Atelier, a remarkable, sometimes over-the-top temple of molecular gastronomy in Ottawa, says fallow creative periods are an open secret among chefs. "It happens all the time," he says. "Most of the chefs I know are constantly under pressure to come up with new dishes and better ideas."

Mr. Lepine and his tiny kitchen crew have created more than 200 original dishes since Atelier opened in the fall of 2008. With the exception of Atelier's signature peanut butter, banana and bacon Elvis Truffle, which regulars won't let him abandon, the restaurant's 12-course tasting menu turns over every six to eight weeks.

The staff around Mr. Lepine are key to his creative process, he says. "The guy who's a lone genius these days is at a huge disadvantage - that sort of approach is going the way of the fat chef."

The cooks at Atelier constantly bounce new ideas off each other, Mr. Lepine explains, and build inspiration from images, smells, sounds and even single words (one recent dessert course originated with the word "shards").

Robert Clark, the executive chef at Vancouver's C restaurant, says that early in his career he made a habit of moving every year or so, when he started to get bored. But that's harder for chefs to do as they get older, and particularly after they open their own restaurants. Mr. Clark's approach at C has been to focus on finding new foods. In his time at the restaurant, he's introduced diners to sablefish, sea urchins, sea cucumbers and goose-necked barnacles.

"I haven't had a lot of days where I've had to say, well, what am I going to do with chicken tonight?" he says.

Mr. Leboe, who was on an eating trip in New York this week, said it's crucial to taste what other top chefs are creating. He recalled one epic night when, just a young line cook in Niagara-on-the-Lake, he drove down to Manhattan after dinner service with a colleague to eat a $600 dinner at Alain Ducasse. They could hardly afford the trip, but even then he saw the importance of staying current, he explains.

But the challenges of keeping creative won't go away so long as chefs in Canada continue to work the hours that are usually demanded here, Mr. Leboe says.

"In Europe, most good chefs ask the question of how they can do less work, but in North America we're always trying to figure out how to turn the tables one more time each night.

That's the way it is most places, at least.

Michael Stadtländer, the chef behind Ontario's Eigensinn Farm and Haisai, which opened last fall, is nearly as famous among chefs for his enviable lifestyle - he cooks just two or three nights a week in winter and often closes for months at a time - as for his superlative cuisine.

He has been at it long enough that he has the confidence to embrace new ideas rather than worry he can't pull them off, Mr. Stadtländer says. For example, in a few weeks he's going to northern Germany to obtain the plans for an ancient bakehouse he saw in an open-air museum near Kiel. He intends to build the same structure in Singhampton, Ont.

The chef says being tied down by impossible work schedules and financial demands is a lifestyle choice. "It's a totally different approach, you know? If that's what you want to do, that's what you have to do." 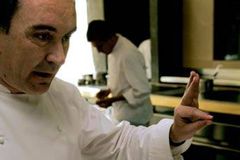 Ferran Adrià: Chef or avant-garde artist?
October 10, 2008
Follow Chris Nuttall-Smith on Twitter @cnutsmith
Report an error
Due to technical reasons, we have temporarily removed commenting from our articles. We hope to have this fixed soon. Thank you for your patience. If you are looking to give feedback on our new site, please send it along to feedback@globeandmail.com. If you want to write a letter to the editor, please forward to letters@globeandmail.com.
Comments are closed