A Canadian citizen held in Chinese custody says authorities tortured her into confessing that she bribed a former leading official who became an outspoken critic of the regime.

You Ziqi of Richmond, B.C., was detained on fraud charges by customs officials at the Beijing airport in 2014 while travelling with her son to visit family in Hubei province.

In a complaint written to the Chinese authorities and obtained by The Globe and Mail, Ms. You said Chinese officials forced her to give testimony that she had bribed Xie Weidong, who was a businessman and former Supreme Court judge before he immigrated to Canada two years ago. In the meantime, the Chinese government seized almost all of Ms. You's family assets, worth around $10-million.

Evidence provided by Ms. You became the basis for a Red Notice, an international arrest warrant-like demand issued by Interpol, against Mr. Xie, who lives in Toronto and has applied for permanent residence here.

Both expatriates say the case against them is based on false testimony, instigated by Communist Party officials trying to cover up the theft of Ms. You's family assets. "I have come from inside the system. I know very well the extent of corruption and darkness there," Mr. Xie told The Globe.

Related: China is thrilled with Trump and the 'failure of U.S. democracy'

Related: Trudeau's China visit is over. What did he accomplish?

Their plights represent the murk of the country's judiciary system, which remains firmly controlled by the party. What may be look like an earnest effort to root out corruption could equally be part of a broader effort to purge an official who has fallen out of favour. Such a dilemma underscores the difficulty of co-operating with a country whose evidence is often unreliable and whose allegations of criminality often masks ulterior motives.

Winnipeg lawyer David Matas, who has a long career in the field of human rights in China, said these kinds of situations are common. "The target of a corruption charge is being asked to implicate somebody relatively high up," he noted. "They operate by attacking friends, relatives, neighbours and business associates as a way of getting the target. They drain the pool to catch the fish."

At the same time, China is pushing for countries such as Canada and the United States to participate in Operation Foxhunt, its controversial effort to scour the globe for people it calls corrupt. Beijing has pushed Ottawa for a formal extradition treaty, and the government has agreed to discussions.

This week, Interpol announced that a leading Chinese security official, Meng Hongwei, will head the global police organization, stoking worry that the appointment may be instrumental in tracking down dissidents as well as alleged fugitives who have fled abroad.

The allegations against Ms. You date back to 1999, when she represented her brother in a debt dispute that landed before Mr. Xie while he was a judge on the Chinese Supreme Court.

Mr. Xie ruled in Ms. You's favour, and told The Globe that he reached out to her after delivering his verdict. At the time, he was planning to step down from the court to launch a website devoted to legal matters.

"She was a businesswoman, and I was just starting my own business. We had a lot in common," Mr. Xie said.

He left the court in 1999. The two became romantically involved, he added, but the relationship did not last.

In 2002, Ms. You left for Canada, where she obtained citizenship. While she was gone, authorities targeted her family back home, seizing more than $10-million in assets from her brother, including a set of precious books and a limousine.

When authorities arrested Ms. You upon her return to China in 2014, they showed a remittance slip that, they said, proved her brother's company had invested in Mr. Xie's website in 2004 – which they called evidence of a bribe for the favourable Supreme Court ruling years earlier.

As interrogators pushed her to confess, they threatened to go public with a tale of her seducing an important judge, and amassed bank transfer statements, audit reports and testimony that, they said, proved she had on several occasions moved public company funds into accounts she personally controlled.

"The suspect You Ziqi defrauded the wealth of listed companies in large numbers," legal papers filed against her allege.

Authorities changed her name while in detention and told her they could send her to remote Inner Mongolia, where "even if she died, no one would know," her lawyer, Xuan Dong, said in an interview. He was not allowed to see her until she had been in detention for more than a year. By that time, she had signed a confession, but authorities refused to provide Mr. Xuan the videotape of her confession.

Later, Ms. You recanted her testimony, insisting that it was forced in a detailed six-page letter – copied to Chinese President Xi Jinping – and in court, where in a pretrial meeting she threatened to commit suicide inside the courtroom if found guilty.

According to documents provided by Ms. You's son, Li Ang, consular officials have visited Ms. You at least three times. "Canada takes allegations of mistreatment or torture of Canadian citizens abroad extremely seriously," Global Affairs spokeswoman Jocelyn Sweet wrote in an e-mail, adding that the department has put in place a mechanism designed to identify situations in which mistreatment of a Canadian may have occurred and to take steps to protect the interests and well-being of Canadians.

Mr. Li, who was with his mother at the Beijing airport when she was detained, said that as she was taken into custody, his mother told him to take of himself, but she didn't seem troubled. "She was confident she was innocent," he said.

Based on the evidence it extracted from Ms. You, Beijing issued an Interpol Red Notice seeking the arrest of Mr. Xie, who moved to Canada in 2014. In a June, 2016, notice provided by Mr. Xie, the Department of Canadian Citizenship and Immigration listed a set of accusations against him based on the Red Notice.

The Immigration Department said it could not comment on a specific case without consent. The Chinese embassy in Ottawa did not respond to questions.

Mr. Xie said one his sisters has now been hauled away in China and accused of taking bribes, as a way to force him back. Another sister, who also lives in Canada, has been barred from leaving China.

For China, bringing back Mr. Xie could have another benefit, silencing a rare figure who both occupied the highest levels of the judiciary and emerged as a public critic. 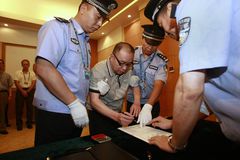