Canada is at a crossroads. A gap has grown between the middle class and the wealthy. Now, that divide is threatening to erode a cherished Canadian value: equality of opportunity for all. This article is part of The Globe's Wealth Paradox series, a two-week examination into how the wealth divide is shaping Canada's cities, schools, social programs – and even its national sport. 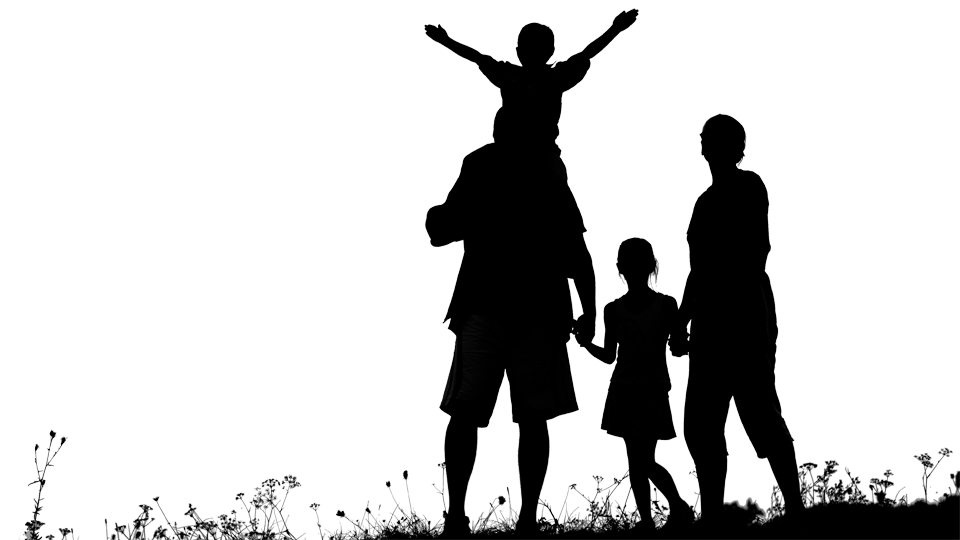 Every generation expects to achieve more than the one that came before it and for many years, those expectations came true. But a disquieting trend has emerged over the past two decades, as the gap between the richest Canadians and the rest has grown, faster here than in all but one other OECD country, the United States. While inequality is less pronounced in Canada than the U.S., it is headed in the same direction, by several key measures.

The growth in inequality is being driven by an accumulation of wealth among the very top income earners, while the middle class lower income earners continue to stagnate. The richest 1 per cent earned 10.6 per cent of Canada’s income in 2012, down slightly from the pre-recession peak of more than 12 per cent, but up sharply from 7.1 per cent in 1982. The concentration of wealth in this country is also rising: The top 20 per cent control 70 per cent of net worth.

How did this happen? A host of factors are at work, including technological change, the shift of manufacturing and other low-skill jobs to the developing world, the decline of unionization, a surge in self-employment and a proliferation of performance-based incentives for top executives. And the great equalizers – universal health care, education, pensions – are under threat, as cash-strapped governments look to trim budgets.

Canada is facing a Wealth Paradox. As wealth continues to grow at the top, the economic health of the whole grows poorer. Already, mobility between income groups has slowed – it is much harder to get ahead than it used to be. If no action is taken, the Canadian dream itself may be in peril. Read more in a full story by Barrie McKenna. 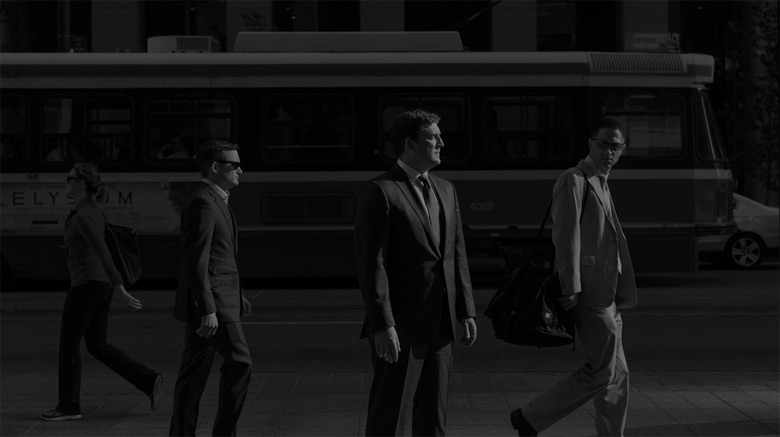 It's not a uniform story though. Through his company’s 35-year history, Leonard Lee, founder of Lee Valley Tools, has ensured the highest-paid worker never makes more than 10 times the wage of the lowest-paid worker. By contrast, that ratio averaged 122-to-one last year (in terms of CEO-to-average worker pay) at Canada’s biggest companies. The maker and retailer of woodworking and garden tools evenly distributes a quarter of pretax profit to its staff of 850 each year. Profit-sharing isn’t the only unusual aspect of its corporate culture. Lee Valley has never had layoffs in its history, never outsourced jobs and its executives get no bonuses.

The approach is easier at a family-run company that’s not publicly listed nor obliged to meet quarterly targets, Mr. Lee notes. But Lee Valley isn't the only company taking this approach. In the U.S., Whole Foods famously keeps its CEO-to-average worker pay ratio at 19 to 1. Costco, which has never had a major labour dispute in its history, ensures its workers in both Canada and the U.S. earn a living wage. And there are business benefits. At Lee Valley, Mr. Lee has found the flatter pay structure pays off in better worker retention and more engaged staff. It has encouraged the company to train and develop its own workers. It also boosts productivity and innovation, he says, because staff see the benefits of their actions. Read more in a full story by Tavia Grant.

On average, CEOs at Canada's largest companies earned 122 times what the typical worker made last year. That ratio was highest at Canadian Pacific Railway. Other companies, like Lee Valley, take a different approach. 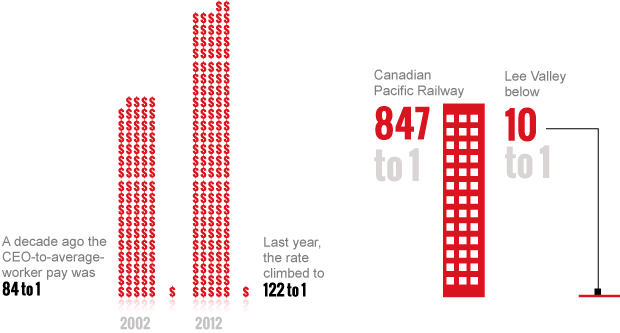 Elsewhere, average executive pay is stretching further from what rank-and-file workers earn. The country’s business elite – the chief executives of the top 100 companies – took home 122 times what the average worker did in 2012, up from a ratio 84-to-one a decade earlier, according to research commissioned by The Globe and Mail. The top dog is Canadian Pacific Railway CEO Hunter Harrison, who with total pay of nearly $50-million in 2012, earned 847 times what the average worker did. In 1984, management consultant Peter Drucker advised managers that the limit should be a 20-to-one salary ratio because wide pay gaps makes it tough to foster teamwork and trust within organizations. Lack of teamwork and trust can translate into falling productivity. 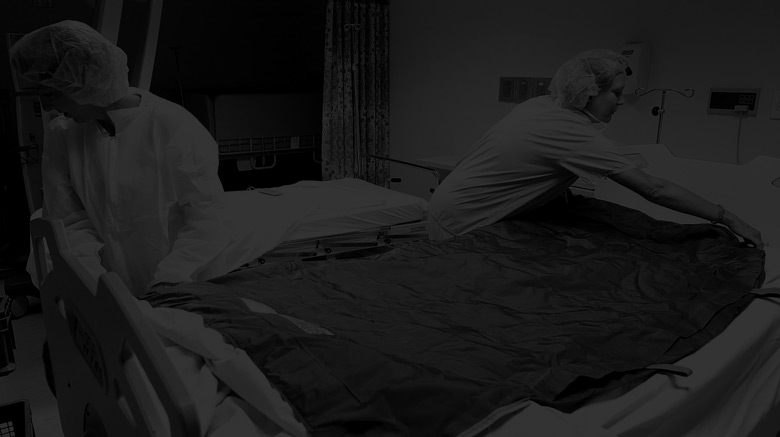 The income gap is perhaps most pronounced in mental health care, which has been called a “two-tier mental-health system” by Michael Kirby, the founding chairman of Partners for Mental Health. An estimated 1.2 million Canadian children are affected by mental illness. Yet, only one in four gets appropriate treatment. Psychiatry is covered by most medicare plans, but the wait for an appointment can be months. A psychologist or social worker can help, but the cost isn’t covered, and it isn’t cheap – upwards of $125 an hour. The well-to-do pay. The middle-class scrape together the money the best they can. And those without the means wait, or do without care. Mental health problems start at a young age, before 24, and tend to hit people hardest in their prime work years. This is one of the reasons mental illness is costing the economy more than $50-billion a year.

To combat this disparity, Kids Help Phone has devised a new way to connect with the Always There mobile app, which was launched almost one year ago. The app allows users to communicate one-on-one with a counsellor without outside observers knowing who they are texting. It includes a Feelings Log, so that users can document when, where and how they feel as they go through their day, as well as a one-touch button to connect with a counsellor by phone or live chat. The organization has plans to update the app to include a resource database, currently only available to the call centre counsellors.

Probability of survival to age 75

The truth is, access to medical care is only a small part of the health picture, which is why nearly all outcomes, including life expectancy, consistently track to income. “We know that having an unequal society brings down the health status of everyone, and brings up health costs for everyone,” says Dr. Gary Bloch, a member of the Ontario College of Family Physicians’ committee on poverty and health. Research estimates that medical care accounts for only 25 per cent of health outcomes, while another 25 per cent is related to genetics and fully 50 per cent depends on the socio-economic determinants of health like income, education, housing, physical environment and community engagement. Read more in a full story by André Picard. 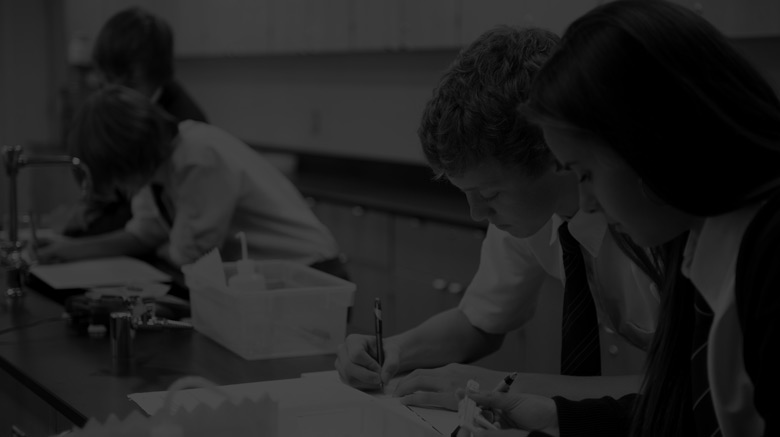 At John A. Leslie Public School in Scarborough, students thrive despite the neighbourhood income. About 70 per cent of parents with kids at the school are born outside Canada. The school’s principal, Greg McLeod, found that raising test scores has taken initiative and strong leadership. He has created a student success group so that kids can share with him what’s working; there are plenty of extracurriculars, including cricket, to keep kids engaged; parents come in for literacy nights and math nights; and a borrow-book program keeps kids reading at home. “We know that if parents feel welcome in their child’s learning, then that carries over into the home,” he said.

The city’s school board is aware of the achievement gap, and is making attempts to close it. One initiative provides additional funding to 150 TDSB schools in low-income neighbourhoods for extra teaching supports, vision and hearing tests (with free glasses and hearing aids), nutrition programs and after-school activities. “You [level the playing field] by focusing and looking at the data of students and really, truly putting intended additional support and effort to students that need the boost,” says Carla Kisko, the TDSB’s associate director of operations.

A MAP OF EDUCATIONAL GAPS

Unlike in places like Vancouver and Edmonton, where school boundaries are porous, Toronto kids are required to attend their local neighbourhood school. Schools in lower-income neighbourhoods have a higher proportion of students failing the provincial standardized tests, achieving at Level 1 or 2, the data reveal (Level 3 is a pass). And a 2010 TDSB study showed that the majority of students identified as gifted were from the most affluent neighbourhoods of the city, while those kids identified with a language impairment or a developmental disability were more likely to come from lower-income neighbourhoods. Why does this happen? Experts say that highly-educated parents can give their kids opportunities their lower-income peers simply don’t have. Well-educated, high income parents also expect a lot from their schools and put pressure on teachers to perform, creating a virtuous circle of engaged parents, children and educators. Read more in a full story by Caroline Alphonso and Tavia Grant. 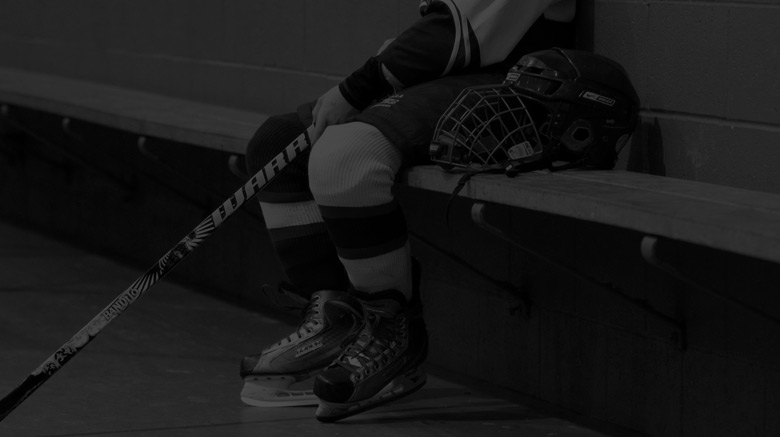 Hockey, one of Canada’s national pastimes, has become infinitely more expensive in the past 10 to 15 years, and is starting to shut out the country’s middle class. Karl Subban, who immigrated from Jamaica at 11, knows this first hand. “They say it takes a village to raise a child, but it also takes a village to make a hockey player,” says Mr. Subban, who had a successful career as an educator. Three of his boys, P.K., Malcolm and Jordan, excelled in hockey through family sacrifice and community support and were drafted into the NHL. The family knows, however, that many more may not get the same chances.

That is why he and his family have partnered with a corporate sponsor to help create the Hyundai Hockey Helpers program, which provides grants of between $200 and $1,000 to kids who can’t afford to play hockey. The program’s first year alone helped 1,880 children get onto the ice. P.K. Subban, who’s now a charismatic, 24-year-old superstar with the Canadiens, has become the face of the campaign, taking part in television commercials that have played during Hockey Night in Canada throughout the season.

The rising costs of Canada's game

Over all, parents of current minor hockey players spent an average of $2,898 on hockey-related items during the 2011/12 season. The parents surveyed earned 15% more than the Canadian average. 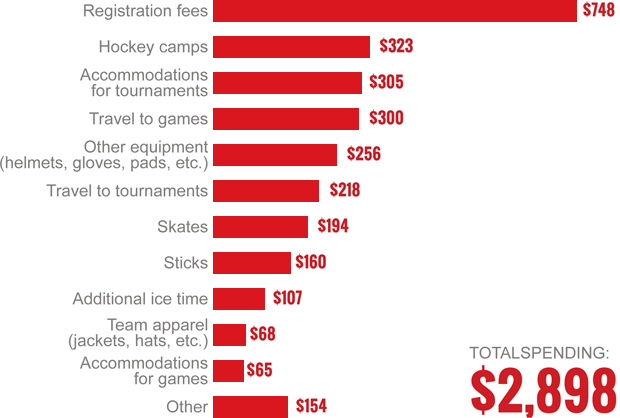 The average hockey parent spent nearly $3,000 on minor hockey in the 2011-12 season alone, according to a survey commissioned by Hockey Canada last year. The expenses also rose considerably as players got older – up to about $3,700 a season for those between the ages of 11 and 17. The 1,300 parents surveyed, meanwhile, had a higher average household income than the national median and the majority listed their occupation as a “professional, owner, executive or manager.” In the highest levels of minor hockey, costs have become prohibitively expensive. One major issue has been the increasing cost of ice time, as several cities have had those costs skyrocket from $50 an hour to as much as six or seven times that. What was once a meritocracy, with the best players moving on, is now a system where money talks. Read more in a full story by James Mirtle.

Which solution would best reduce the effects of income inequality in Canada?Just show me the results

There are no respondents based on your selected filters. Reset your filters and try again.