Somewhere in the bowels of Ottawa, officials are quietly preparing contingency plans for a fiscal bailout of Newfoundland, should that become necessary. They may wish to add Ontario to their plans.

Ontario’s fiscal situation was dire before the pandemic; it has grown much worse because of the pandemic; and it is going to get still worse after the pandemic is long past. That, mind, is the optimistic scenario – which is to say, the scenario on which the Ontario government has chosen to base its latest budget.

It shows the province’s net debt-to-GDP ratio rising, not falling, from the astronomic levels it has already reached, for as many years as the government can credibly project. From 47 per cent in the year just ended – more than three times what it was 30 years ago, and second-highest in the country after Newfoundland – it is forecast to continue to increase, to more than 50 per cent.

Only in the last years of this decade does it begin to recede, and then only on some heroically optimistic assumptions, a mix of the usual complacency about interest rates, fond hopes about economic growth and some truly herculean reductions in spending. We’ll come back to these in a minute. For now let us consider whether the government of Doug Ford even appreciates the gravity of the situation it is in.

Well, all right, there’s a pandemic on, and the government is focused on spending whatever it takes to get the province through it. First things first. But longer term? Does it even know what sustainable public finances look like, let alone how to get there?

The government’s choice of targets – not rules, or anchors, but targets – does not fill one with hope. It has three. First, it hopes to limit the debt-to-GDP ratio “to not exceed 50.5 per cent” over the medium term. Why 50.5? Because, one suspects, that is where the debt-to-GDP ratio was headed anyway – though if growth comes in below projections, the target will prove no obstacle.

As for the other two – debt interest to revenue, and net debt to revenue – the government declines even to pretend to have a target for these, other than “to slow their rate of increase.” (Slow it by how much? From what benchmark? It doesn’t say.)

Not only has the government assigned itself a sliding, indeterminate, non-binding target for fiscal sustainability, it seems in no hurry to get there. “Our return to fiscal sustainability,” the province’s Finance Minister, Peter Bethlenfalvy, said in his budget speech, “will take many, many years.”

And how will even this leisurely progress be achieved? Not by raising taxes: The minister was clear enough in repudiating that idea. And not by cutting spending. The budget speaks only of “continuing to improve government operations to deliver services more effectively and efficiently without introducing new cuts to government spending.” (Emphasis added.)

I’m as willing to believe there’s waste in government as the next guy. But the trajectory of spending on which the budget depends assumes not only a degree of waste, but a fervour for rooting it out, such as we have rarely seen, least of all from this government. Adjusting for inflation and population growth, the budget projects that by fiscal 2030 program spending will decline by 12 per cent from prepandemic levels.

That breaks down into an 8-per-cent drop in real per capita spending on health care, and a 15-per-cent decline in non-health spending. No such sustained reduction in spending has been seen since the Mike Harris years. But the Harris government made no bones about it: It was all about cutting government spending. It wanted to rethink the role of government, not just trim around the edges. Does the Ford government? Not so it’s letting on.

Rather, the government places its hopes in three things: continued low interest rates (the budget forecasts debt service costs will remain at less than 10 per cent of revenues, even as the debt soars), more money from the federal government (“a federal partner who pays their fair share”) and economic growth – lots and lots of economic growth.

To be fair, growth is critical. In the long run, the only way any province will be able to pay for its public health care system, in the face of a rapidly aging population – more than 66 cents of every dollar in Ontario’s tax revenues this year will go to pay for health care – is by increasing the economy’s potential growth rate.

And since population aging also means much slower growth in the supply of labour, the only way to boost economic growth is by permanently increasing the rate of growth of productivity. That kind of economic transformation will require a number of quite radical policy shifts, almost all of them likely to be controversial.

For example, it will mean removing barriers to competition on which some industries and their work forces have come to rely. It will require deep cuts in tax rates, at a time when the government’s finances are already under strain.

Does the government understand this? Maybe. The budget promises a “plan,” to be released later this year, “to strengthen the conditions for long-term economic growth.” The plan will “articulate a clear vision,” establish “goals to work towards” and “identify initiatives that will achieve those goals.”

They haven’t a clue, in other words. They are, however, committed to developing a clue. 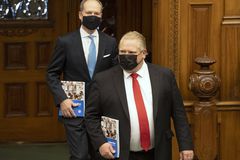 Ontario budget includes billions of dollars to continue the fight against COVID-19
March 25, 2021 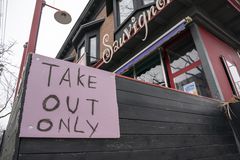