Prime Minister Justin Trudeau says he knew in advance the chief financial officer of China’s Huawei Technologies would be arrested in Vancouver, but emphasized there was no political involvement in the case that has sparked angry protests from Beijing and concerns about repercussion against Canada.

The detention of Meng Wanzhou, the daughter of Huawei’s founder, has drawn Canada into a global power struggle between the United States and China. The two countries are in the midst of a trade war and are fighting over U.S. assertions that the Chinese telecom giant is a national-security risk and a pawn of the ruling Communist Party.

Mr. Trudeau, whose government is seeking closer economic ties with Beijing, said Thursday that Canadian Justice Department officials decided to arrest Ms. Meng when she was transiting through Vancouver on Dec. 1 at the request of U.S. law enforcement authorities. The Americans allege she violated U.S. trade sanctions against Iran.

“The appropriate authorities took the decisions in this case,” Mr. Trudeau told reporters in Montreal. “We were advised by them with a few days’ notice that this was in the works but, of course, there was no engagement or involvement in the political level in this decision because we respect the independence of our judicial processes.”

Opinion: Canada will pay a price no matter what for its part in the worsening U.S.-China conflict

The Prime Minister said he has not held discussions with his Chinese counterpart or other world leaders about Ms. Meng’s detention. Beijing has accused Canada and the United States of arresting Ms. Meng without cause. Ms. Meng’s father, Reng Zhengfei, is a former People’s Liberation Army engineer who grew Huawei into the largest private company in China and the No. 2 mobile phone maker in the world.

China has angrily rebuked the Canadian government for the arrest of the high-profile telecom executive.

“Detaining a person without providing an explanation has undoubtedly violated her human rights,” said Chinese Foreign Ministry spokesman Geng Shuang, while the Chinese embassy in Ottawa said Ms. Meng had not violated Canadian or U.S. law and demanded her immediate release.

“The Chinese side has lodged stern representations with the U.S. and Canadian side, urged them to immediately correct the wrongdoing and restore the personal liberty of Ms. Meng Wanzhou,” the embassy said in a statement. “We will closely follow the development of the issue and take all measures to resolutely protect the legitimate rights and interests of Chinese citizens.”

Scott Jones, the head of the new Canadian Centre for Cyber Security, which reports to the Communications Security Establishment, said his agency is prepared for possible Chinese cyberattacks in retaliation for the arrest of Ms. Meng, who is considered part of China’s corporate royalty.

“We always have to be resilient no matter what the possible trigger could be so we increase our resilience against any form of malicious activity that we could be facing as a nation," Mr. Jones told a news conference. “We are working very closely with the broader security community.”

U.S. prosecutors in New York have been investigating whether Huawei violated U.S. sanctions in relation to Iran. Huawei said Ms. Meng faces “unspecified charges in the Eastern District of New York” and that she was arrested when she was transferring between flights in Canada.

Ms. Meng will appear for a bail hearing in a Vancouver courtroom on Friday and a publication ban on the details of the U.S. allegations is in effect at the request of the Huawei executive, federal Justice Department spokesman Ian McLeod said. None of the allegations against Ms. Meng have been proved in court.

Final approval to extradite Ms. Meng will be up to Justice Minister Jody Wilson-Raybould if the judge rules in favour of U.S. prosecutors. Ms. Meng, however, could appeal that decision to the courts, which could delay a decision for years.

Vancouver-based immigration lawyer Richard Kurland said he expects Ms. Meng, with her family’s considerable financial resources, would seek the court’s approval to stay at a private dwelling while awaiting the extradition hearing. She could propose paying for private security to watch over her and agree to electronic monitoring, he said.

Mr. Kurland also warned Canadian and American citizens in China are now at risk of being caught up in retaliation from Beijing.

“Everyone’s at risk. I am concerned there is now an appetite to nab-and-grab a Canadian,” Mr. Kurland said. “As of today, if Canada and the United States are doing this to Chinese citizens, what is to prevent China to doing the same thing to citizens of Canada or the United States for economic crimes or what-have-you?”

The United States and Australia have barred Huawei equipment from their nascent 5G neworks, and last week New Zealand blocked the first request from one of its wireless carriers to install the Chinese company’s equipment on a 5G network, citing a “significant network security risk.” The United States, Canada, Britain, Australia and New Zealand are members of the Five Eyes intelligence-sharing alliance.

On Thursday, one of Britain’s major telecoms, BT Group, said it was removing Huawei equipment from its network and would not buy the company’s 5G technology – a move that came after Alex Younger, the head of Britain’s Secret Intelligence Service, known as MI6, questioned whether his country should use the Chinese telecom’s gear.

In an opinion piece for The Globe and Mail, former Canadian Security Intelligence Service director Richard Fadden said Ms. Meng’s father and other Huawei executives are “extremely close to the upper echelons” of the People’s Republic of China.

“The close relations between Huawei and a Chinese government with a history of cyberespionage should be worrisome,” Mr. Fadden said in the article co-written with Brian Lee Crowley, managing director of the Macdonald Laurier Institute.

Mr. Fadden, who was a national security adviser to both Mr. Trudeau and former prime minister Stephen Harper, said China has a long history of cyber operations against Canada, citing Chinese hacking of now defunct Nortel, the National Research Council and the potash industry.

“It is not too late for Canada to refuse Huawei’s participation in 5G,” he and Mr. Crowley write.

Senator Mark Warner, the ranking Democrat on the U.S. Senate intelligence committee, echoed Mr. Fadden’s remarks, saying “there is ample evidence that suggest that no major Chinese company is independent of the Chinese government and Communist Party.”

“I continue to strongly urge our close ally Canada to reconsider Huawei’s inclusion in any aspect of 5G,” Mr. Warner said in a statement.

Mr. Jones, Canada’s cybersecurity chief, has previously played down the need to block Huawei, saying this country’s safeguards are adequate to mitigate any risk. He has cited what he considers a robust system of testing facilities for Huawei equipment and software to prevent security breaches – one he’s suggested is superior to those of some of Canada’s allies.

Asked Thursday whether he agrees with his counterparts in the United States, Australia and New Zealand that Huawei equipment is too risky to be allowed into 5G networks, Mr. Jones said Canada is still reviewing the question.

He also again stated circumstances in Canada are different from other Five Eyes countries.

“The key thing is Canada has unique circumstances that we have to take into account here. We’re going to look at it comprehensively and make a decision that is in the best interest of Canadians,” he said, explaining that Canada is a “large country” and the government has “unique relationships with our telecommunications providers.”

Opinion
Canada will pay a price no matter what for its part in the worsening U.S.-China conflict
December 7, 2018
Opinion
After Huawei arrest, China should take a deep breath and wait for the evidence
December 6, 2018

Opinion
On Huawei and 5G, Canada must unapologetically pursue our national interest
December 6, 2018 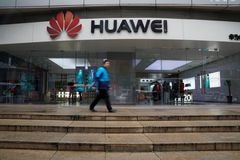